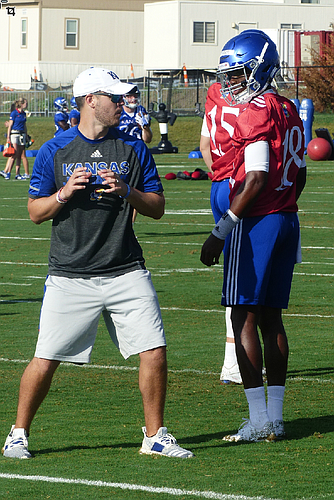 Oklahoma head football coach Lincoln Riley checked his temper and maintained his composure in impressive fashion during his press conference after the Kansas football captains did not shake Baker Mayfield’s hand at the coin toss. Even so, it was clear that he was fuming just beneath the surface. The thought occurred to me at the time: How badly will Riley run it up on Kansas when the Jayhawks visit Oklahoma in 2018?

It’s still a valid question. The answer: Not as badly if his brother, Kansas tight ends and fullbacks coach Garrett Riley, happens to be the interim head coach for the Nov. 17 clash at Gaylord Family-Oklahoma Memorial Stadium.

The brothers share a strong facial resemblance. Might they also have similar brains? They might, and since Lincoln, 35, took the Sooners all the way to the four-school college football playoffs in his first season, that might mean that Garrett is a prodigy as well, way advanced from most football coaches his age.

The younger Riley joined the staff in 2016 as an offensive analyst and became quarterbacks coach in 2017. Before coming to KU, Riley spent three seasons coaching at East Carolina, two working under his brother, then an offensive coordinator, as an offensive assistant. Before that, Riley spent a year coaching at Augustana (Ill.) College and a year at high school in Lubbock, Texas. He earned his bachelor's degree from Texas Tech in 2012 and was a quarterback on the Red Raiders' roster in 2008 and 2009, before transferring to play a year at Stephen F. Austin in 2010. A native of Muleshoe, Texas, Riley earned 2A All-State honors in 2008.

Taking over a Big 12 program at the age of 29 would be a tall order, but in his brother he would have a good road map for how to plan his week. Given how much success Lincoln Riley has had a such a young age, it's not preposterous to think Kansas could turn to Garrett if in the market for an interim head coach.

Lincoln Riley was handed a terrific program with lots of weapons, so we really don't know how great a coach he is just yet. He will need to show it with a few years of his own recruits. At this point there is nothing to base hiring his brother who may or may not be as good of a coach who we really don't know is that great to start with. I do like the character traits displayed by Lincoln Riley. He appears to be a man with great integrity.

Garrett would certainly have Plenty of Time to be the Head Coach! And Lincoln would Feel Sorry for him and Call off the Starters Sooner than Later? Sheesh!