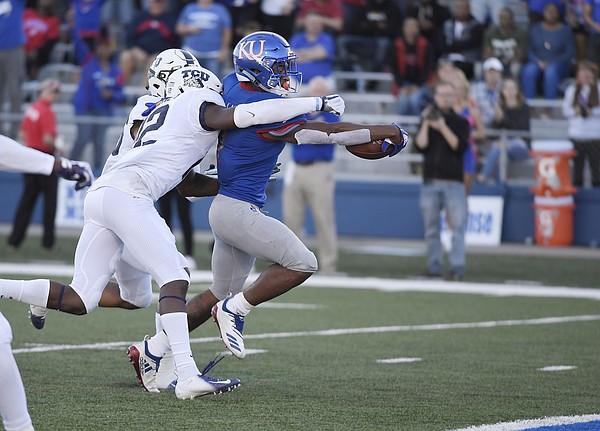 Kansas running back Pooka Williams Jr. reaches out for a touchdown against TCU Saturday. by Mike Gunnoe

1 - Pooka Williams: Has become great weapon in passing game. Caught seven passes for 102 yards and two touchdowns and rushed for 33 yards on 11 carries and had 41 yards on two kick returns.

2 - Peyton Bender: Had a terrific second half, scrambling to extend a play that resulted in a touchdown pass and running for 12 yards on third and 11. Completed 19 of 29 passes for 249 yards and two touchdowns.

3 - Joe Dineen: Had nine solo tackles, assisted on four others and was in on a tackle for a loss.

4 - J.J. Holmes: Made huge fourth-down stop on the goal-line stand and on another play exploded for a tackle for a 4-yard loss. Personal foul penalty marred his day.

5 - Stephon Robinson: Laid out for one spectacular 31-yard catch and had three others to finish day with 59 yards in receptions.

6 - Keith Loneker: Became the 11th player on the team to pick up an interception and one of his two tackles was behind the line of scrimmage.

8 - Jeremiah Booker: Had three receptions for 49 yards, one of them a 34-yard reception. Having his healthiest, most productive season as a senior.

It would seem that O sets with 2 RBs could add some nice diversity and keep the D from keying on the running game. Which back stays in the backfield? Gets a handoff? Goes out for a pass? A modern sort of option O. Love that Pooka got 100+ receiving.