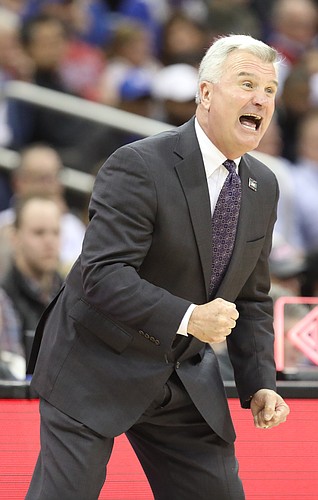 Once college basketball emerges from its current embarrassing scandal a couple of years from now, bright minds will figure out how to make it an even bigger, more profitable industry and by then it might be so big that polling companies will release weekly data on approval ratings of coaches with the fan bases of their schools.

When that time comes and a coach's popularity spikes upward rapidly, call it a Bruce Weber. Taking a team with modest expectations deep into March will do that for a college basketball coach.

K-State was picked eighth in the 2017-18 Big 12 preseason poll, finished fourth with a 10-8 record and made it all the way to the Elite Eight in the NCAA Tournament, knocking off Creighton, UMBC and Kentucky before losing to Loyola.

"I don't worry about it as much as you guys do, probably," Weber said of his popularity with K-State fans. "I just worry about our kids and being prepared and ready to play. There are always people who don't like you. Jud (Heathcote, former Michigan State coach) told me many times when you get a job, 90 percent of the people like you and 10 percent don't and each year it's going to go down and it's going to get tougher and tougher. As a coach, if you worry about every negative fan and every media person you're not going to be able to coach."

He spends more time studying X's and O's than expletives on message boards after tough losses.

"Everybody says, 'How do you deal with it?' Very rarely does somebody come up to me in the grocery store and say, 'God, you suck as a coach.' No one does," Weber said. "Those people are the faceless opinion guys that, you know, continually say stuff but they don't ever do it to somebody's face."

He sounded as if he didn't know he had a popularity problem.

"I've thought it's always been positive for me at Manhattan," Weber said. "We've got great fans. Obviously they're excited about our team. We've got an older group that made a nice run. It's always fun when people like you. It's human nature. But at the same time I just worry about helping the players do their best."

Kansas State was picked to finish second to Kansas in this year's preseason poll.

Of course...UBMC took out the #1 seed in KSU's bracket. If UVA was adequately prepared for round one, KSU loses in the second round.

If K-State had Dean Wade they'd have been in the F4. What they achieved without him is an equal credit to the youngsters and Weber.

Picked to be the best amateur team in the Big 12

Weber is a good coach who is a good teacher of motion offense and solid man-to-man defense.

He is not a really top-notch recruiter, however. Following the ‘18-‘19 season, K-State will plummet.

Ask Illinois what they think ole zbruce. NOT much was glad to see him leave .. k state always the second or third fiddle in state. Come on Staters do you really believe your program so squeaky clean ? The only thing that brought you from bottom was huggy PAYING. Beasley and Walker !!! YOU CAN HAVE BRUCE
Watch how it goes next three years predict one ncaa appearance

They should like him I would think. Took the Illini to the title game. No small feat even if it was with Bill's players.

Weber seems like he'd be a hell of a DII coach because he appears to be way over his head at the D1 level...literally every good team he has ever had was built by the previous coach...this upcoming KSU team should be good..possibly even FF good.....if ever there was a time that he could prove that he can build a top team with his own recruits, this is it