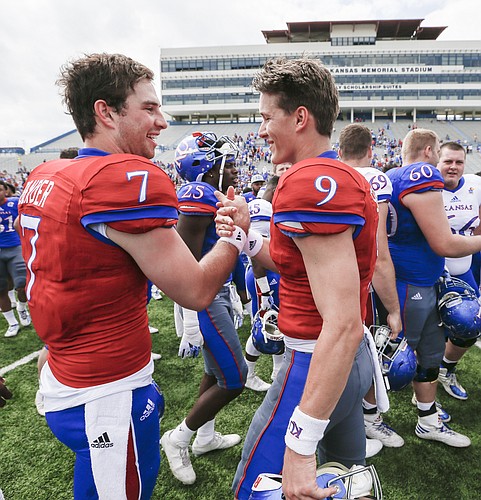 (Still) Kansas head football coach David Beaty said he will see how things go in practice this week before selecting a starting quarterback. Maybe he just wants to keep TCU guessing or maybe he really does put more emphasis on how quarterbacks perform in practice than in games, although that's hard to believe.

The statistics clearly show that Stanley is a better quarterback vs. Big 12 competition than Bender.

In Big 12 play only, Bender has completed 107 of 210 passes for 1,096 yards, which translates to him completing 51 percent of his passes and averaging 5.2 yards per attempt. He has thrown nine touchdown passes and seven interceptions.

Again in Big 12 play only, Stanley has completed 224 of 383 passes for 2,310 yards, which translates to him completing 58.4 percent of his passes and averaging 6.0 yards per attempt. He has thrown 12 touchdown passes and 14 interceptions.

Stanley's the more mobile quarterback and is a good enough runner to call designed quarterback runs.

Also, Beaty said Miles Kendrick, battling a shoulder surgery, is available, so TCU will take a look at the limited game action available on Kendrick as well.

If Kendrick plays Beaty should be fired immediately...kid needs to redshirt to save a year of eligibility.

Not only has Stanley been better in conference competition, but it's not even close. Beaty's continued shunning of Stanley makes no sense whatsoever.

Tom, you're an insightful guy. I'd like to hear your takes on the arguments against CS9 if possible.

1) Carter Stanley gets sacked on 12.5% of dropbacks. That is the worst in the FBS

2) Carter Stanley is a walking turnover/has never played a full game and not turned the ball over.

I am Carter > Bender all day.. just curious why you hitch your wagon to a guy that is last in so many statistical categories.

SIDENOTE: You have stated that Miles Kendrick is recovering from a surgery when I believe you meant Injury as no surgery was required to heal his injury.

I agree that stats are misleading. In CS one game his stats look excellent but his inability to engineer anything in the first half of the osu game left us hopelessly behind 28-7. Not that I believe Bender is so much better, just that Stanley can’t win either

Amazing what happens when you have a mediocre front line.