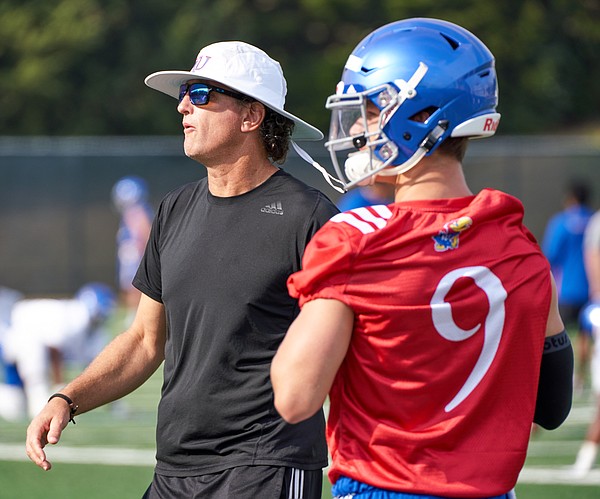 Kansas football offensive coordinator and quarterbacks coach Doug Meacham and quarterback Carter Stanley watch as a drill plays out in front of them during a preseason practice on Aug. 4, 2018. by Carter Gaskins

Midway through last season, his first at Kansas, offensive coordinator Doug Meacham confessed that everything he tried that had worked everywhere else he was employed was not working at Kansas.

It was a stunning admission, a 180-degree turn from coach speak designed to say nothing. It said everything, which might even factor in why Meacham doesn’t do interviews once a week, as was the case last season. He and defensive coordinator Clint Bowen, and the rest of the assistants for that matter, were last available to the media before games started.

I imagine Meacham is relieved at the new policy. He might have even lobbied for it, not because he has anything against reporters, rather because he likes to tell the truth and the truth is he never has worked with such ineffective blocking, which is where it all starts for any offensive coordinator's plans.

In last season’s TCU debacle, the second consecutive shutout, this one yielding just 21 yards in total offense, Meacham looked on the sideline as if every X and O had been drained from his brain, frozen by the sight of a level of incompetence he never had witnessed.

And he coaches just one side of the ball. No need to make him responsible for both sides.

Meacham came to Kansas after TCU head coach Gary Patterson reacted to interest from other programs in co-offensive coordinator Sonny Cumbie by making him the chief architect of the offense, which would relegate Meacham to a secondary role.

Head coach David Beaty, well connected in coaching gossip in Texas, grabbed Meacham before anyone else and surrendered OC duties, which he had taken onto his plate during a 2-10 season in 2016.

Meacham is coaching from the press box this season, a new perspective for him. So is a run-oriented offense.

An offensive lineman blocking for Barry Sanders and Thurman Thomas at Oklahoma State, Meacham is a smart man, but did he smart decision to coming to KU?

Beaty "grabbing Meacham before anyone else" helped no one but Meacham. Shoulda let some other team grab him. NEXT!!!

Correct on Meachem and this is a Bad List. And how could Keegan miss Associate Head Coach and Running Backs coach Tony Hull, former Successful High School head coach, whom is responsible for recruiting some of our best players. You might as well see what he can do. We've nothing to lose.

Doreen is too old and has no shot of transitioning to HC so why even bother. If your going to do something when it means nothing you should at least learn something about some potential coach within the program.

Bowen has already had his chance. You wouldn't interim him again. Just hire him as HC or leave him where he is at.

Riley is the coach that makes the most sense from your list.

Sendish is too green. But I could see doing it just to see how he would handle it. But such a move with a ton of losses at a Power 5 could stunt a young developing coach's career.
Tony Hull makes better sense than 4 out of the 5 you listed. From a mediocre program just after Hurricane Katrina, Hull guided the Eagles to the playoffs in seven of his nine seasons at the helm of the program, including a state championship game appearance in 2014 and a state semifinals showing in 2015.

"Meacham is a smart man, but did he smart decision to coming to KU?" what the crap is that sentence? That is sloppy at best or just plain god awful grammar.

Please cease using good space for these type articles. Who are you helping? Does it build esprit de corps among the team and other coaches? I do not understand your reasoning for this content. I am disappointed.

Tom, LJ World Editors - please stop with these articles. They serve no purpose but to provide a platform for those who desire a coaching change. It is disappointing to read them in the local paper, when it is understood that many - many - many desire an alternative coaching approach from top to bottom.

Thanks Keegan for these articles, it brings hope for the future. It also helps align our two recruits that are orally committed and prepares them for a temporary change that will lead to a brighter future.

Doug is wearing a nice Sombrero!

Doug blocked for Sanders and Thomas? It don't get no better than that (if you play OLine).

Doug was a Broyles Award Finalist (Top Asst Coach) in 2014 at TCU!

Beaty was excited to Land My Guy! Something has gone wrong.