Did David Beaty pull a Tommy Lasorda with timing of coaching change? 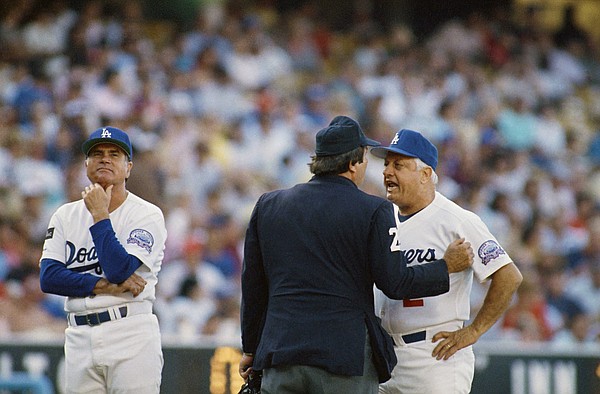 One of the many enjoyable aspects of covering Hall of Fame Dodgers manager Tommy Lasorda, the greatest motivator in the history of baseball, centered on witnessing him lose his cool in his office.

Most of the time, anyway. I could have done without the flying chicken spittle, but hey, chalk that up to an occupational hazard of a very interesting occupation. Beat writers enjoyed Tommy's blowups so much that sometimes we, I mean they, tried to goad him into them.

Sometimes it worked. Other times he saw through the attempt and laughed.

I'll never forget the time Barry Bloom, a really smart man blessed with a terrific sense of humor, covered the Padres and could bait the manager with the best of them. Lasorda's day started with reading the newspaper and seeing all the play his restaurant had been cited for multiple health-code violations. His day ended with a tough loss to the Padres.

"What hurts worse, Tommy," Barry asked, "knowing you have rats in your restaurant or losing to the Padres?"

Much to our disappointment, Lasorda couldn't stop laughing at Bloom's question and finally got around to answering it: "Oh, no question, losing to the Padres."

Better at managing baseball than restaurants, Lasorda also could have gone either way with his answer to another question I witnessed him being asked: "Tommy, you are the all-time leader in wins for International League pitchers. Is that an indication of how good a pitcher you were or how bad?"

He laughed and reeled off the names of great Brooklyn Dodgers pitchers who blocked his path to the major leagues. Lasorda appeared in eight games with the Dodgers in 1954-55 and seven with the 1956 Kansas City A's. He retired with 0-4 record and 6.48 ERA. He won 1,599 games as a manager.

I recall one question that elicited the opposite response of a laugh from Lasorda. A little background: TV announcers loved it when Lasorda took over third-base coaching duties to break a losing streak and it usually worked, to the delight of the broadcasters who loved the peppy, colorful way he coached third base.

The question: "It seems every time you decide to coach third base to break losing streak the game is on national TV and the opposing starting pitcher is either a struggling rookie or an over-the-hill guy hanging on by a thread. Is that just a coincidence?"

Run for cover. More than chicken spittle flew that day. A stream of words that made those used by the father fixing the furnace in a "A Christmas Story" seem fit for church by comparison, bounced off the walls of his office.

So what does this have to do with Kansas football? Good question. Think David Beaty's decision to fire offensive coordinator Doug Meacham and appoint himself as the OC/quarterbacks coach. Is it just a coincidence that it happens to come when Kansas faces Texas Tech, a traditionally horrible defensive team? Well, yes, because the Red Raiders no longer fit that description.

In three Big 12 games, Tech has allowed just 24.3 points per game, fourth-best in the Big 12 and has allowed 428.7 yards per Big 12 game, sixth in the conference without the benefit of having played Kansas yet.

So Beaty didn't time this move to make himself look good.

The following are the points scored by KU in the past four years, so if he scores 21, he basically improves the offense: 2017 - 19 (Meacham)

So, Beaty spewed chicken spittle at the press when announcing his decision? And Beaty has no idea of Tech's good defensive numbers? So, Beaty's like Lasorda? Sort of?

Nice try at name dropping. Like a stretching first baseman taking a throw on a close play, is like this story trying to explain Beaty's motivation.

Oh, let me tell you the time I played ball with Darrell Porter....

Wow, I thought it was just me when I was reading that article. I must have missed class at the William Allen White School of Journalism the day they taught reporters to find the most round-about and semi-self endearing way to explain coaching decisions when you can't illicit a real answer on direct quote.

Tom, tomorrow you get another lunch break and you get another crack at it. Put this one in the trash with the half-eaten burrito bowl. Sorry, I know you have much better in you still.

I was in the locker room of the AA Dodgers SA Missions back in 1998 when Tommy watched Paul Konerko misplay a grounder at 3rd. He, along with Dennis Reyes were traded to the Reds soon after, with Adrian Beltre taking his place at 3rd. "That's the last time that SOB will commit an error as a Dodger" was Tommy's rant at the TV.

Nice Steve. My thought was if TK had a real life stretch like the writing he could be an all star 1st baseman.