Friday Forecasts: Careful of betting with a system 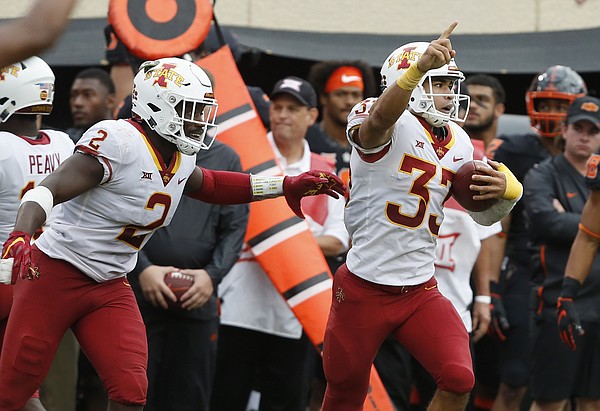 Iowa State defensive back Braxton Lewis (33) celebrates with teammate Willie Harvey (2) after an interception in the second half of an NCAA college football game against Oklahoma State in Stillwater, Okla., Saturday, Oct. 6, 2018. (AP Photo/Sue Ogrocki)

Everybody has a system for betting sports. Break Even Benny told me about his surefire method to do no worse than break even.

OK, but it only works if you have enough money set aside to cover a real long losing streak. For example, after going 0-3 for the second week in a row, my losing streak stands at six.

Still, Central Florida, which averages 574.4 yards in offense per game, didn’t lose last year and hasn’t lost this year. The Knights aren’t going to leave anything to chance.

2 - Nebraska +3.5 at Northwestern: The Huskers opened as 8.5-point underdogs and the line quickly dropped five points and has stayed there. Northwestern has three key starters out with injury. The Huskers put up big numbers offensively most weeks but don’t have the athletes they will after a couple of years of Scott Frost recruiting. At some point, the Frost effect will kick in even before the athletes arrive. Why not this week?

3 - West Virginia -6.5 at Iowa State: Braxton Lewis, a redshirt junior safety from Overland Park, was named Big 12 Defensive Player of the Week, another good Kansan who got away. He led the team in tackles in a 48-42 victory over Oklahoma State and had one of the Cyclones’ 16 tackles for loss, a school record.

Never double your bets hoping to break even. Maybe more on contests you feel are better to win. As for games that have more than 30 points for favorite have to realize maybe underdog hits a few scores means favorite has to score more than usual. Odds sometimes are not overly accurate so injuries and ineligible players affect the final score. See you are enjoying your effort to pick winners.

This is very risky for sports betting but 100% foolproof for betting black on roulette.

Until you run out of money.