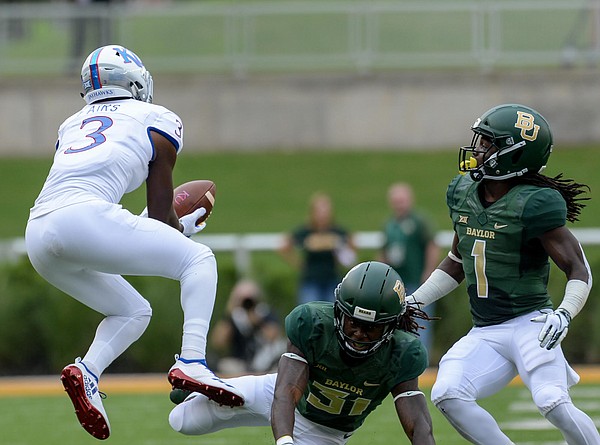 Fourth-year Kansas football coach David Beaty said last week he doesn't anticipate using the new rule that enables players to redshirt as long as they don't play in more than four games, but two juniors on the roster who might be attractive to other FBS schools still could do so.

Receiver Evan Fairs played in the first four games of the season and did not participate in the two most recent ones. Cornerback Kyle Mayberry has played in just one game.

Beaty does not always share if a player is injured and sometimes tries to pretend that an injured player is available, which is what he did with Carter Stanley at the beginning of the 2017 season. Other times, he does share that a player is injured.

Beaty doesn't do his weekly Tuesday press conference during bye week, so we'll have to wait until next week to ask if Fairs and Mayberry have missed games with injury. If Beaty says they have not, it's possible that both players decided to redshirt with the intention of transferring elsewhere.

If that's the case and there is a coaching change at the end of the season, the new coach could take a crack at trying to convince the players to stay.

Five days before Oklahoma State defeated Kansas, 48-28, at David Booth Kansas Memorial Stadium, Gundy announced that receiver Jalen McCleskey was using the new rule to redshirt and transfer after he had played in four games this season for the Cowboys. The next day, I asked Beaty if he had had any players inform him of their intentions to do the same. He said that at that point none of his players had done so.

It will be interesting to hear next week whether that has changed.