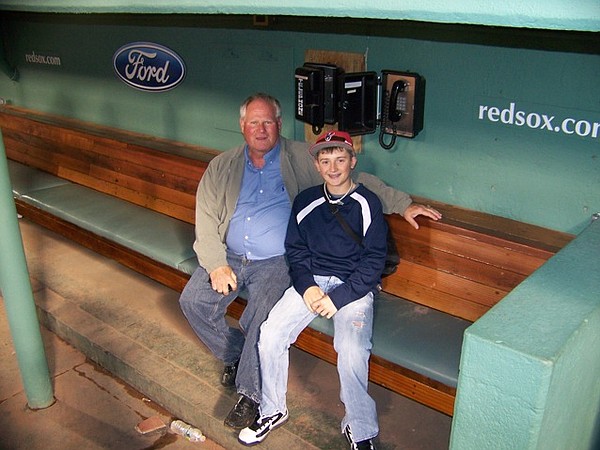 Lawrence’s Marty Pattin, left, poses with grandson Bailey Pattin, a middle-infielder for Perry-Lecompton High, in a Fenway Park dugout. The elder Pattin was among the former Red Sox honored recently before a game at the venerable Boston ballyard.

Marty "Duck" Pattin's life will be celebrated Thursday from 5 p.m. to 8 p.m. in the Naismith Room on the second floor of Allen Fieldhouse.

Pattin, a 114-game winner in 13 seasons spent as a starting pitcher and reliever, the final seven seasons with the Royals. His last pitch was thrown in the 1980 World Series. His coaching career at the University of Kansas wasn't nearly as successful as his pitching career, but that didn't dent his local popularity a bit. In six seasons (1982-87), Pattin's teams posted a .416 winning percentage.

Before, during and after his time as KU baseball coach, I wonder how many people went home and told a loved one, "I met a former big-leauge pitcher today and he was the friendliest man." Probably as many as the number of people who met him during his years in Lawrence. He never blew off anybody who asked him to do his Donald Duck impression and liked his nickname so much that for years his telephone answering machine message said, "Hello, this is your friendly mallard, 'The Duck.' "

Not that he didn't get cranky once in a while. If you happened to be watching a Royals game with him and the pitcher let the pitcher crowd the plate, look out.

"Why do they let the hitters do that?" Marty fumed. "All you have to do is put one right here (darts his hand below his chin.) If he doesn't get the message send another one right in there. He'll back off."

And then there was the time we were watching a game at a restaurant and the Royals pitcher who had a 4-1 lead in the eighth inning led the walkoff man.

"Throw it right down the middle and the worst that can happen is he hits it over the fence and you're still up two runs," Marty groused. "Instead, he walks him and all just watch, all hell's about to break loose."

Less than a minute later he would laughing again, telling another story from his days with the Royals or the 1969 Seattle Pilots.

If you never heard Pattin tell the story of the time he rained on third baseman George Brett's great play by inexplicably cutting off the Hall of Famer's laser of a throw across the diamond and if you never heard Marty's Donald Duck impersonation, click this video and you'll get two for the price of one:

Some one needs to edit this article. There are tons of grammatical and spelling errors.

I love all the old stories about Duck. I remember the days when he played for the Royals. He wasn't quite as good as he had been in the past but he was a great teammate according to all the guys he played with. And he did add value to the Royals as a reliever and spot starter. I always wished that he would have had more success at KU but he is still loved by all who played for him.