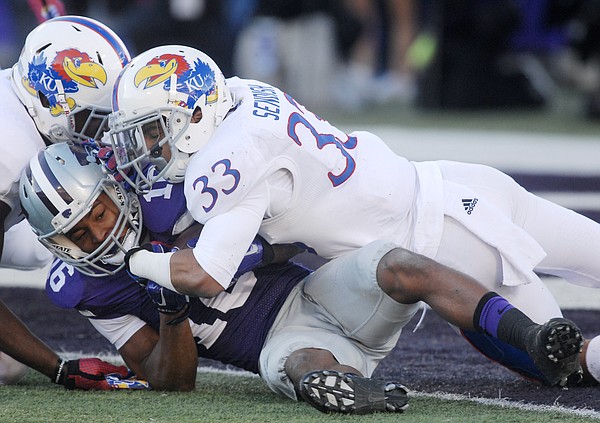 College football head coaches aren’t paid by the game. They’re paid by the week, just like the rest of us, except at the FBS level they’re paid better because they landed one of just 130 available positions.

Kansas coach David Beaty’s salary calls for him to be paid $1.7 million this season, plus incentives. He already has earned $150,000 in bonuses. He earned $50,000 for defeating Central Michigan, per a clause that awards him that much for each non-conference FBS victory and $100,000 for defeating Rutgers, a Power Five opponent.

If things don’t go well in Morgantown, W.Va., and new athletic director Jeff Long decides to terminate Beaty’s contract, he will owe him a $3 million buyout, distributed in six equal payments. If I’m reading the contract correctly, that means that if Beaty were fired after the West Virginia game, then Kansas wouldn’t have to pay him his weekly salary of $32,692.23. They would save seven weeks (bye week, plus six games) of payments, which totals $228,845.61.

Routs scored over Central Michigan and Rutgers suggested this could be Beaty’s best team, but given that this is his fourth season and that 14 junior college players and five transfers from four-year schools were recruited to make this a make-or-break season, this needed to be the year Kansas would win multiple Big 12 games. That’s tough to picture when opportunities against Baylor and Oklahoma State passed.

Long’s history suggests he’s not a fan of interim hires, but I don’t imagine he’s a fan of homecoming crowds numbering 18,364 either.

So just in case things blow up Saturday in Morgantown, it’s time to resume the interim head coach countdown with the least experienced assistant on the staff.

Cassius Sendish has all the ingredients that one day will make him a good head coaching candidate. First, he’s smart. Second, he’s direct. Third, he’s passionate. Four, the next time he makes an excuse will be the first time. Fifth, he’s a tireless worker.

Those were the qualities that enabled him to make the most of his skills during his time as a Kansas safety. Sendish won’t let anything stand in his way of pursuing a coaching career. He proved that when he was offered the chance of heading way up in the sky to stand on a platform filming every practice, even though he’s afraid of heights.

Is Sendish ready to take on the massive task of taking over a Big 12 football program in midseason, even with mentor Clint Bowen sharing what worked and what didn’t when he took over for Charlie Weis for the final eight games of the 2014 season?

Of course not. He has only been an on-field coach for half a season. But Kansas could do worse. He loves his alma mater, loves football and loves work.

Considering the KU secondary is getting torched under his tutelage.....?????

In all fairness to Sendish, he only coaches the Safeties. Bowen coaches the Cornerbacks. Serious Question , who coaches the nickel back in the nickel secondary? Dumb to have 2 Secondary Coaches? Possibly.

What are the serious odds Beaty is canned before seasons end? You've been doing this awhile and you seem to have a pretty good feel about things especially when it's about to go down.

All respect, but the chances are better than I think you think they are.

I’m all for it. But you’re right I think Beaty finishes the season.

Why didn't you resume the list after the two wins?

Make no mistake, we're all ready to move on from this dumpster fire. I just think it is funny TK decided to put a hold on the interim list after there were signs of life instead of sticking to his guns.

How old is Sendish? 25? He seems like a great guy, but how is he not at the bottom of this list? I feel like Tom forgot about him when he started these rankings, and realized his mistake during the hiatus.

If you have Cassius Sendish on this list you better damn well have Dirk Wedd on this list.

Dirk Wedd would be an upgrade.

Shows how bad David Beaty is when Cassius Sendish would be a likely candidate for Interim.

"Long’s history suggests he’s not a fan of interim hires, but I don’t imagine he’s a fan of homecoming crowds numbering 18,364 either."

If that wasn't the all-time low point for KU football, I'm not sure what is. And I actually attended the toilet-bowl in Manhattan.

We all know where this is headed, might as well save $200,000, give your interim two weeks to prepare and get people interested in the program again.