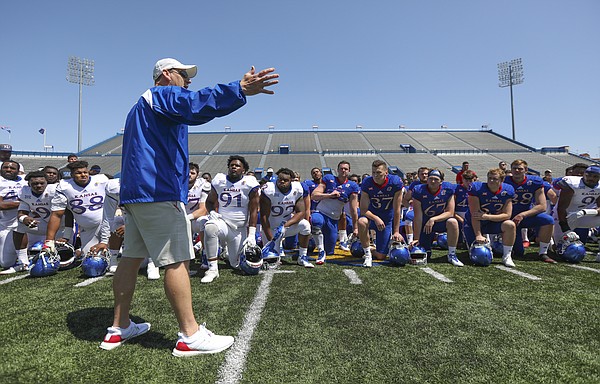 You see men crawling all over Las Vegas who are different versions of the same person. Greasy hair. Bulging bags under their eyes. Brown double-knit pants decorated by weeks-old donut stains.

They have one thing in common. They couldn’t convince themselves that when odds look too good to be true, turn around and run away from the smoke and cacophony of bells and into the sunlight.

It simply does not pay to gamble. The house always wins and in turn you might lose your house. So often, the odds that look to good to be true have the sharpest fangs.

That brings us to BetDSI setting its over/under win totals for Big 12 schools:

So in order to lose a wager that looks to good to be true, betting on Kansas to have fewer than three victories, the Jayhawks would have to win four or more games. Three would be a push.

Kansas opens with Nicholls State, which has made steady progress under fourth-year head coach Tim Rebowe, who inherited an 0-12 program. The Colonels have gone 3-8, 5-6 and 8-4 under Rebowe and have most of the players returning from last year's squad. They're no pushovers, but are ranked no better than 25th in the Stats FCS preseason poll. Kansas should win that game.

The Jayhawks then travel to Mount Pleasant, Mich., where they will try to snap a 46-game road losing streak against Central Michigan. The Chippewas handled Kansas in Lawrence pretty easily last season, 45-27. Shane Morris, who started his career at Michigan, threw for 467 yards and five touchdowns without throwing an interception. He graduated and Kansas has upgraded its secondary, so it's not unreasonable to think the road slide could end and the Jayhawks could bring a 2-0 record back home for a Week 3 clash with Rutgers, picked for last in the East division of the 14-team Big 10.

Kansas ranked 120th in the nation with 18.7 points per game last season. Rutgers averaged 18 points a game and ranked 121st. They have very little experience back at quarterback. Strange as it sounds, the Jayhawks have a realistic shot at opening the season 3-0. A 2-1 or 1-2 start is more likely, but 3-0 is not an absurd thought. But even if they do start 3-0, the search for a fourth victory is contained to the Big 12.

Baylor returns most of its key players from a team that smoked KU, 38-9, in Lawrence. This year's game is in Waco. The rest of the road games are against West Virginia, Texas Tech, Kansas State and Oklahoma. Not feeling an upset at any of those places, not even with two weeks to prepare for the trip to Lubbock.

Kansas was outscored 88-0 in consecutive road games vs. Iowa State and TCU last season. TCU visits David Booth Kansas Memorial Stadium in Week 8, the Cyclones in Week 9. A change in venue isn't enough to compensate for 88 points. Quarterback Kenny Hill no longer is with the Horned Frogs, but he had nothing to do with Kansas managing just 21 total yards in Fort Worth last season.

Then it's off to Manhattan to play Bill Snyder's experienced Kansas State Wildcats. Kansas has hung tough against K-State the past two seasons, losing in Manhattan, 34-19, in 2016 and losing at home last season, 30-20. K-State will be sky high for this one.

A trip to Norman is next, so the search continues in the season-finale at home vs. Texas. The Longhorns won't look past KU. The memory of an overtime loss to the Jayhawks in 2016 is too fresh.

I purposely skipped over one game because I consider it KU's best shot at a Big 12 victory. Oklahoma State visits Lawrence on Sept. 29, the second game of the Big 12 schedule.

Mason Rudolph, who threw for 494 yards in KU's season finale, and receiver James Washington, are with the Pittsburgh Steelers now.

If the Cowboys were confident they had Rudolph's replacement in house they would not have welcomed Hawaii graduate transfer Dru Brown, who will join the program in the summer. Oklahoma State will be bigger and faster than Kansas, but if the quarterback spot isn't settled by the last week of September, it's conceivable the Jayhawks could score a monster upset. Conceivable is a long, long way from probable. There's a chance, but it's a small one.

So many things would have to go right for Kansas to win four games, what would be the most since 2009, that it seems as if the under is just too good to be true.

So Beaty stays or gets fired for having another 1 win season?

Too good to be true.

What a laughingstock. Matt Rhule at Baylor just got there & in YEAR 2 is projected to win more games than Beaty who is in YEAR 4. Baylor & Matt Rhule with their 30 walk -ons & kids fleeing the program after the rape allegations can beat a Beaty-coached team 20 out of 20 times in any venue.

We are not Baylor, nor should anyone think we will ever be what Baylor is in football. Baylor is located in the one of the richest HS football recruiting states in the country. The ability to play for a D1 program and stay in state is more than Kansas can or is able to offer. We need to show improvement, but Baylor is a much easier job than Kansas has or ever will be.

Uhhhhh..Baylor has never been a consistent winning football program. Recency bias aside, they've been nothing special and, for a long while, an easy win for us.

Baylor has a winning record all time, has 9 conference titles, 17 top 25 seasons and is 11-4 vs Kansas. They met only twice before Big12 play, splitting. When was this period of "easy wins"?

Do you actually know anything about anything?

A very informative article So many things would have to go right for Kansas to win four games, what would be the most since 2009, that it seems as if the under is just too good to be true.

Strange things happen so should they win four or even five lots of tongues swallowed. Gotta be optimistic hope it happens.

I'm thinking "Wouldn't it be great to have an unending supply of Spanish Iberica jamon," but I don't think it will happen.

I would bet more money that KU goes 0-12 than them winning more than 3 games.

It's the total lack of improvement that is disheartening for us fans. Seriously are we making any progress? It sure doesn't appear like it.

Between FB, WBB and Softball, KU will have fewer Big 12 Victories than you can count on one hand. Pathetic.

So....3-0 should be the expectation of every player, coach and fan of the program. All three non-cons are absolutely winnable. 2-1 is a major disappointment. 1-2 or 0-3 is regime change.

Miracle on the Brazos. Baylor had finished in last place in 4 of the last 7 seasons including the year before and had not won the conference championship in 50 years. Also, prior to this season, they had never appeared in the Cotton Bowl-from Wikipedia

They’ve also won 8 straight against us, most coming since Zenger began his steady destruction of the program. And two of our recent wins were blowouts, also known as easy wins. Also from Wikipedia.

Also, four of their conference championships are before the Great Depression. So that makes 5 in 87 years. Football dominance redefined.

I may not know much but I do know how to “Do the Wikipedia”.

"Kansas opens with Nicholls State, which has made steady progress under fourth-year head coach Tim Rebowe, who inherited an 0-12 program. The Colonels have gone 3-8, 5-6 and 8-4 under Rebowe and have most of the players returning from last year's squad."

Oh, so that is what a turnaround looks like...been so long since i have seen one i forgot...appreciate the reminder.

Some easily suggest continue failure. Even though that is highly likely hey let us suggest improvement. Doesn't hurt to be positive.