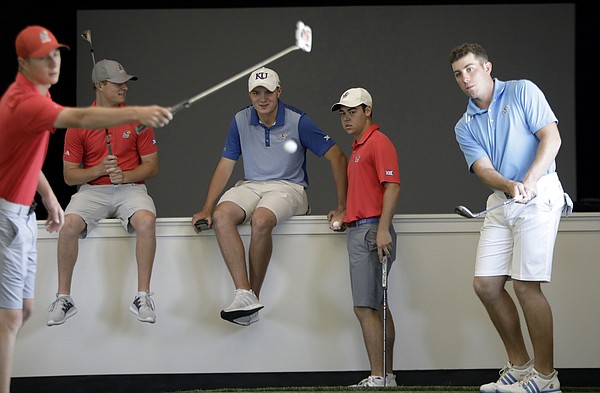 Stillwater, Okla. — Illustrations of the punitive nature of Karsten Creek, site of the NCAA championship, are easy to find.

First, consider that Northwestern, which led the first day after stroke play with a team score of 8-under 280, didn’t make the first cut, blowing up to 308 in the second round and finishing at 296 in Sunday’s third round.

The Wildcats tied for 16th with Stanford and only the top 15 advanced to today’s final round of stroke play. The top eight advance to match play.

Second, consider that Kansas which did not have anything higher than a double bogey on a card en route to winning the three-round Pacific Regional and had just four doubles, had 12 doubles and seven triples in three rounds at Karsten Creek.

Third, realize that the more Oklahoma State players compete on their home course, the more the point that conservative golf is the smart way to go.

“This course is so demanding you can’t really force anything out here,” said OSU’s Matthew Wolf, who shot 69 Sunday. “As soon as you force things and go after pins, that’s when you start making high numbers and mistakes that you wouldn’t normally make. I think we really had a good game plan sticking with being conservative.”

Karsten Creek has been OSU’s home course since 1994.

“That’s such an advantage we have knowing the course,” Wolf said.“Things might look pretty easy from the fairway, but if you miss it in one direction you’re probably making par or bogey. We stuck to our game plan well, aimed for the middle of the green and took advantage of the par 5s.” 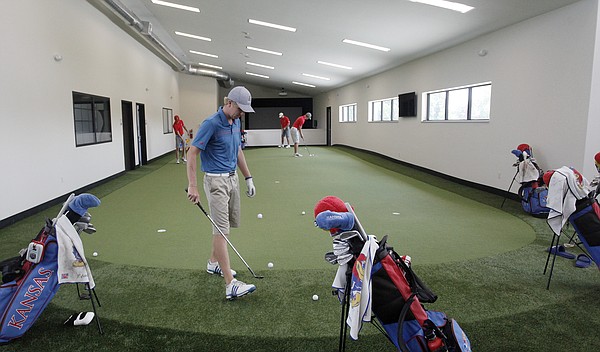 KU senior Daniel Sutton, foreground, and other members of the KU golf team practice putting inside the new KU golf facility at the Jayhawk Club, formerly the Alvamar Country Club. The team is the 15th seed in the NCAA Men’s Golf Championships, which begin Friday in Stillwater, Okla. by Mike Yoder

A look at each of KU's players' score breakdowns from the NCAA finals:

A week earlier, at The Reserve at Spanos Park in Stockton, Calif., crooked numbers were far more rare. The five Jayhawks combined for only four doubles and didn't have any doubles en route to the winning the Pacific Regional.

The players' combined breakdowns for both the regional and the finals: