KU pitching depth to be tested in Big 12 tourney 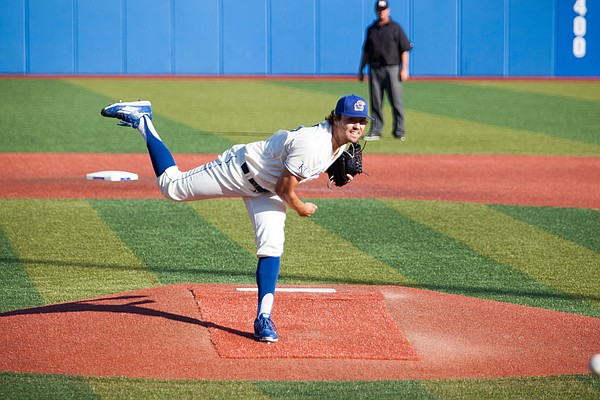 Junior right-hander Jackson Goddard will be on the mound for Kansas today against Texas in a 12:30 p.m. game that will feature a power pitcher against the top power hitter in the Big 12.

Kody Clemens was named Big 12 player of the year Tuesday and has hit a conference-best 19 home runs. Clemens is the son of former Longhorns right-hander and should-be Baseball Hall of Famer Roger Clemens, who along with Barry Bonds has received my HoF vote every year since becoming eligible.

The winner takes on the the winner of the Oklahoma-Baylor game Thursday at 4 p.m. and the losers of those two games face each other at 9 a.m. Thursday.

Even if the Jayhawks were to win every game on their way to the title game, they would have to play five games in five days, a tough challenge given their lack of pitching depth.

KU’s top two starting pitchers can hang with anybody in the nation, but beyond that the pitching depth thins quickly.

Goddard missed six weeks with a strained oblique muscle and proved in his final regular-season start, vs. Oklahoma last Thursday, that he is all the way back. Goddard struck out 11 in seven innings and No. 2 starter Ryan Zeferjahn, an even harder thrower, duplicated those numbers the next night.

“I missed six weeks, but when you go out there for the first time you feel like you haven’t pitched in a year because it just seems so long,” Goddard said. “I think I made some progressions week-to-week and it all kind of clicked (against Oklahoma) so hopefully I can ride the momentum.”

Goddard took a huge leap from his freshman to sophomore season and a year later, Zeferjahn did the same.

Closer Zack Leban can be on the streaky side, but throws hard as does setup man Ryan Cyr, who at times can struggle with his control.

Breaking-ball specialist Tyler Davis can do well for an inning or two at a time, but isn’t well suited for a second time through the lineup.

Now, more than ever, Blake Goldsberry’s season-ending injury puts KU in a tough spot. He could have come in handy with either a start, out of the bullpen or both during the Big 12 tournament.

boo yah! guessing winning this thing is our only path to the tourney?

Since the LJW won’t report timely, on the baseball team results, we have to do it for them.