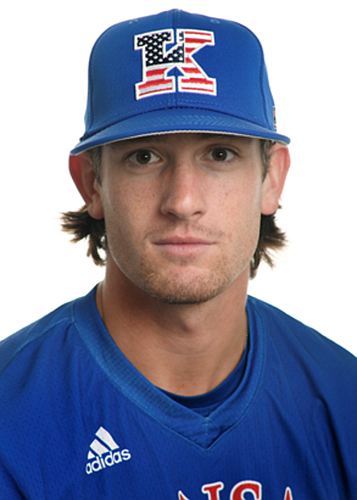 His desire to become a student at the University of Kansas outweighed his thirst for continuing his baseball career, so Luke Bakula gave up the game and enrolled at KU.

Not recruited by any school beyond the junior-college level, Bakula thought he was ready to give up the game. He quickly learned otherwise.

A shoulder injury wiped out most of his high school career, except his senior year.

“It was tough leaving the game,” Bakula said. “I missed it. I transferred to a junior college and I figured if I played well enough I’d be able to come back and play for KU. Luckily I did. It’s been awesome.”

Especially this past weekend.

In Thursday night’s game against Oklahoma, Bakula hit a two-run home run during a four-run rally in the ninth inning to tie a game James Cosentino won with a walk-off home run in the 10th. A senior reserve first baseman, Bakula went 3 for 5 in the first two games of the series and takes a .327 batting average into the postseason.

Bakula’s big hit Thursday night triggered a celebration in the Jayhawks’ dugout and in the stands. He received a big ovation, but he has a way to go to become the family’s most famous Bakula.

His uncle, Scott Bakula, made his name as an actor nearly 30 years ago in the TV series “Quantum Leap” from 1989-93. He now as a starring role in NCIS: New Orleans.

His nephew isn’t Scott Bakula’s only connection to baseball. In his first Broadway role, in 1976, he played Joe DiMaggio opposite Alyson Reed in “Marilyn: An American Fable.”

“He’s actually a Jayhawk himself,” Luke Bakula said of his uncle, a native of St. Louis. “He went here for about a year and a half, then went out to Hollywood to try his luck there and became really successful.”

Luke hasn’t taken any drama classes at KU, but if his uncle came calling, he’d answer.

“My brothers and I always joke about trying to get on a TV show with him, maybe some throw-back episodes where we can play him as a child or something,” he said. “He’s really good at what he does.”

Bakula and his teammates play Texas at 12:30 p.m. Wednesday in the opener of the double-elimination Big 12 tournament at Chickasaw Bricktown Ballpark in Oklahoma City.

Any chance we can get Uncle Scott to leap into Sweet Lew's body in 2009 and smooth over the relationship with Mark Mangino?

Maybe Bakula will get another shot at getting drafted but either way, a good read.