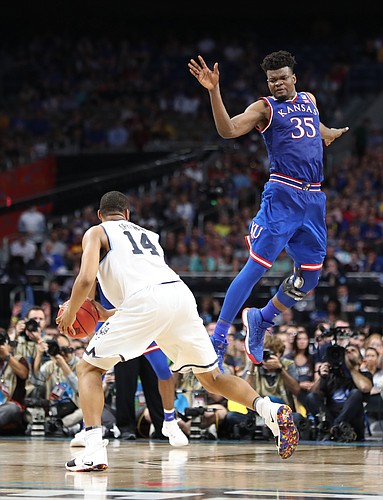 Villanova forward Omari Spellman (14) fakes out Kansas center Udoka Azubuike (35) during the second half, Saturday, March 31, 2018 at the Alamodome in San Antonio, Texas. by Nick Krug

This new-age philosophy that if you don't shoot a ton of 3-pointers you're doomed to fail rubs me so wrong that I decided to look at the past 16 Final Four teams in four different categories listed on Kenpom.com, the first two dealing with the volume of 3-pointers taken, another with 3-point accuracy and a fourth with the size of teams.

Size turned out to be the most common thread for Final Four squads, only slightly ahead of 3-point accuracy, and the two least important factors are 3-point frequency.

So the idea that teams that don't chuck 3-pointers don't cut it anymore is hogwash. A look at Final Four teams from the past four NCAA tournaments:

I'd be more interested in how those teams who do shoot a lot of 3's fared against those who do not shoot tons of 3's, in the Final Fours.

3 pointers are a bigger weapon and influence than before, but as Self has said, they can be fools gold. When the 3 pt shots fall and the offense is up and down, sure its fun to watch..but how do you compensate for when the shots dont fall? Id rather have a team that is able to enforce its will in the post and let the guards stay on the perimeter than a team that has to rely on hitting 3s at a high volume while asking guards to help rebound..as long as that Big team has enough guys who can hit 3's to keep the opponent honest, that IMO is way better than a team full of 3 pt marksmen

size without athleticism is nothing, imho. guys need to be able to dribble drive the ball at any time, can shoot jumpers and a lot of pick n rolling. quickness is really important here.