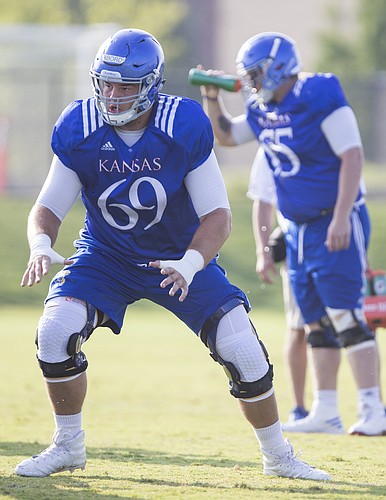 Kansas offensive lineman Mesa Ribordy moves to block a defender during practice on Friday, Aug. 11, 2017 at the practice fields west of Hoglund Ballpark. by Nick Krug

The Kansas football roster hasn’t been updated since season’s end, which maintains a certain degree of mystery to what 2018 will look like.

So many questions remain. An updated roster will answer some. The 15 spring football practices will clarify others.

The first area of interest involves the identity of the offensive player who will start each play with the football in his hands.

Question No. 1: Will center Mesa Ribordy’s concussion history allow him to continue his football career or will KU have to turn elsewhere for a center?

Either way, identifying an offensive lineman who can snap and handle all the duties that come with the position is a top spring priority for the Jayhawks.

Ribordy missed the Iowa State and TCU games, which KU lost by a combined score of 88-0 and followed a 106-yard performance with a 21-yard historically bad dud.

No obvious candidates jump to mind. Hakeem Adeniji could be tried, but the team is on the shy side at tackle in the first place, so that might not work. 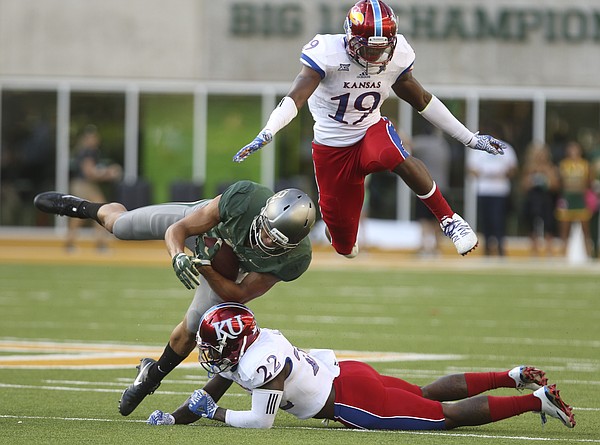 Kansas defensive end Isaiah Bean (19) gets airborne as he and safety Greg Allen (22) take out Baylor wide receiver Blake Lynch (2) during the fourth quarter on Saturday, Oct. 15, 2016 at McLane Stadium in Waco, Texas. by Nick Krug

Question No. 2: Will defensive end Isaiah Bean’s concussion history allow him to continue his career?

If not, KU will have plenty of candidates, thanks to recruiting the position aggressively in anticipation of losing Dorance Armstrong to the NFL draft.

Bean had trouble putting on weight, but had remained an intriguing prospect because of his explosiveness. 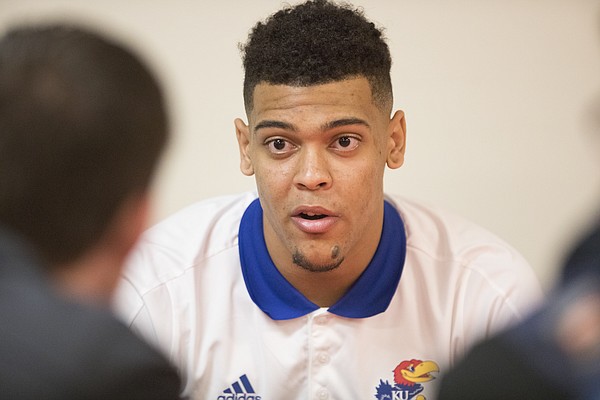 Question No. 3: Will head coach David Beaty take a different approach from seasons past and name a starting quarterback by the end of spring, giving the top choice more time to get teammates to rally behind him?

Let’s hope so. Beaty and offensive coordinator Doug Meacham will choose from three candidates. Peyton Bender, a senior, and Carter Stanley, a junior, split the job in 2017 and neither player won over the coaching staff.

Enter Miles Kendrick, an undersized born leader, hard worker and confident presence. He’ll be given a serious look after spending his first semester out of high school at a junior college in California before transferring to KU, the only school to offer him a scholarship. He’s considered a dual-threat QB, as is Stanley. 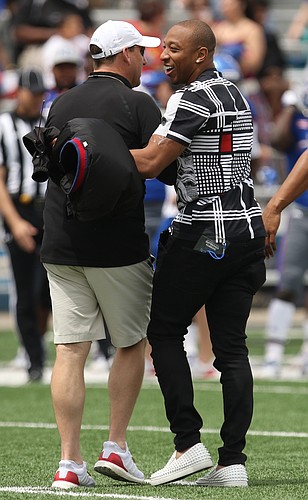 Denver Broncos cornerback Chris Harris greets David Beaty prior to the start of the 2017 Spring Game on Saturday, April 15 at Memorial Stadium. by Nick Krug

Question No. 4: Will graduating high school a semester early enable cornerback Corione Harris ample time to refine his game to the degree he can become a starter from Day 1 of his college career?

At 6-foot-1, 170 pounds as a high school senior in New Orleans, Harris gained a reputation as a physical corner and was recruited by Auburn, Florida, Georgia, LSU, Oklahoma and Texas, among other heavyweights and stayed loyal to KU assistant coach Tony Hull.

If Harris can lock down a starting job right away, he’ll generate a huge buzz. He wouldn't be the first cornerback named Harris to start as a freshman at KU. Chris Harris arrived on campus with decidedly less fanfare and developed into an All-Pro corner. 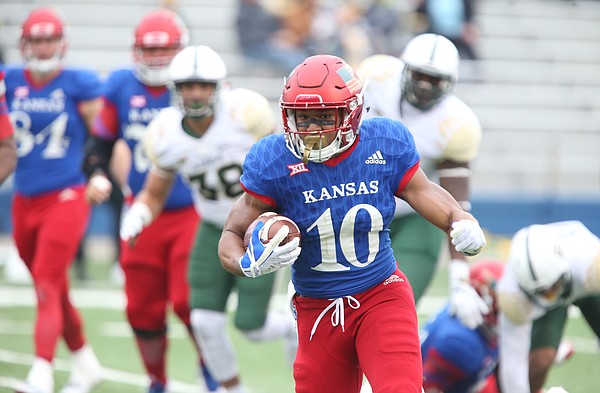 Kansas running back Khalil Herbert (10) takes off on a run during the third quarter on Saturday, Sept. 4, 2017 at Memorial Stadium. by Nick Krug

Question No. 5: Will solid depth at running back result in more running plays?

At previous coaching stops the personnel on hand dictated that Meacham’s offenses would be pass-oriented. But don’t forget, this is a man who spent his college career blocking for Hall of Fame backs Barry Sanders and Thurman Thomas. His coaching background is rich with Air Raid history, but don’t think for a second he doesn’t know the value of running the football.

1.) I think our OL will still be an issue with or without Ribordy. But obviously it'll be worse without him.

2.) Bean has the potential to be a stud. Hopefully he can put on some weight and take care of himself because we'll definitely need him.

3.) I'm fairly confident we won't know the starting QB for 2018 until the first snap. Beaty seems to think it holds an advantage for KU. It hasn't proved to be true yet. If I were to guess though it's going to be between Stanley and Kendrick.

4.) I have no doubt Coe Harris will be an immediate starter. This guy is a stud and will easily be our best DB. Yes, even ahead of Mike Lee.

5.) As long as our RB's stay healthy I think we'll see a healthy dose of runs. We don't have a lot of promise at QB and our OL is better at run blocking than pass blocking, even if it's by a thin margin (really bad versus pretty bad).

Mike's a safety technically. I'm with you on the naming the starter thing too. I think that's ridiculous and our record shows that withholding that info hasn't helped us at all.

Exactly, which is classified as a DB.

There is only one real question. Will the offensive line improve enough to allow the team to compete? Last year's line was horrible. Until the answer to that question is yes, all other questions are moot.

Please no more "guess the Quarterback" pick one and development them. Total waste otherwise. If there are questions about the O-line already oh boy. At least got another late O-line recruit from KS.

I agree with all the comments about the OL, but isn't Adeniji recovering from double labrum surgery? I simply can't imagine that he's being counted on for much of anything at this point, that's pretty nasty surgery.

;-) Geez Tom ANOTHER negative article. What's with all of the questions for the upcoming season? Can't you just be happy that they are back on the field willing to work their tails off? We have a top recruiter as our coach, you should be more supportive. The line will be fine and our qbs will be top notch. I don't know how you still have a job.

Sincerely Bryson :-) KU FOOTBALL most ardent supporter. Say something negative at your own risk.

Okay, here's something positive. I'm very positive and optimistic about the dual AD/Coaching search that should begin sometime around the evening of September 29. That's if the Big 12 hasn't already kicked us out of the conference. So, there, I said something nice about KU football (sorry for the plagiarism, Tom).

I read on another message board somewhere that Isaiah Bean was done playing football. I can't confirm that of course. Ultimately, I question whether or not he'll even have much of an impact on this team. We've got some pretty studly DEs coming in. As far as QBs go, all the San Mateo fans seem to think we got a steal in Miles Kendrick. That remains to be seen, but none of our QBs will have much success if our OL doesn't incrementally improve this year. We have 8 of 10 linemen returning who was either on the 2 deep or had significant playing time. Not sure how I feel about that.

Best thing we can do:

Nine pieces of solid advice. Bill Snyder ran no-huddle offenses when everyone else was run-oriented, retired a Hall of Famer, came back and installed a run-focused offense when everyone else was amassing 1,000 yards of offense a game. Bob and weave, zig and zag. Smart coaches know how to scheme an advantage when they don't necessarily have the best talent on the field.

And.....if Beaty starts any game with an onside kick this year....I say we bring out the torches and pitchforks.

Spring practices are to either develop and sort out talent or to try out new offensive and defensive schemes. We finally have 85 scholarship players and a roster full of upper class experienced players. The question is do we have good enough starters and good enough depth to compete in the Big 12?

Keegan or Benton, a football article in the making. Nebraska wants to expand its football roster to 150 players. That would be 85 scholarships and 65 walk-ons. All Big 10 teams have rosters of 120 to 130 players. Each walk-on costs Nebraska $25K. What is the roster size of Texas, OU and TCU compared to Kansas, K-State and Iowa State? Or how about the roster size of the entire Big 12? An article ripped off from Rivals.com.