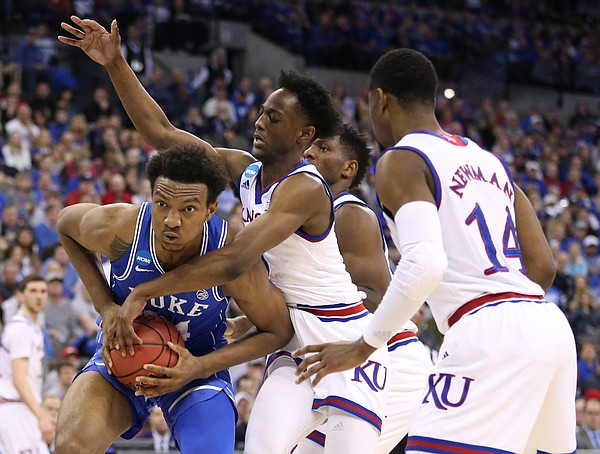 San Antonio — Kansas last played in the Alamodome in a regional in 2011, defeating Richmond and then losing to VCU.

But one key Kansas reserve played here as recently as last season.

“Marcus (Garrett) played in this building the state tournament, so he's the only one with any experience in the Dome, I guess, ever,” Kansas coach Bill Self said.

Garrett has weaknesses to work on in the offseason, most notably his jumper and free throws, but Self has appreciated his defensive sophistication.

“He's one of the few high school kids that knew how to make a college team better by not scoring,” Self said. “Most high school kids learn how to score and when they get to college they're going to be the fifth, sixth, seventh option. So what other things do they do to make somebody better? He fit in perfectly with us because he can do a little bit of everything. He's not a prolific scorer, but he can do a little bit of everything.”

Garrett played in a state semifinal and said he "almost had a triple-double" in a losing effort.

We don't need a triple double but if you can run them off the line and rebound that will help. You helped sustain us when Vick was struggling and made #14 more possible. We know you can hit shots and drive too.

We keep saying it and hearing it but Marcus' impact on D with deflections, busy hands and steals are invaluable and will be tomorrow and for the next three years.