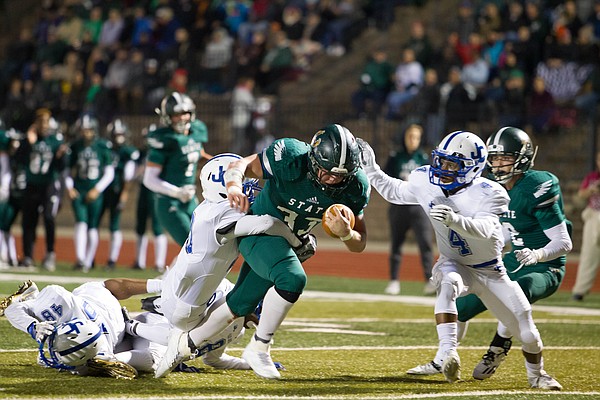 Free State junior running back Jax Dineen tries to break a few tackles against Junction City on Friday at FSHS.

Sheahon Zenger, David Beaty's last line of defense against a 3-33 record, is gone now, so coaches using negative recruiting against Kansas have even more credibility with their lame-duck portrayals of KU's fourth-year coach.

It's not going to be easy for the Kansas coaching staff to line up commitments when the recruits they're pitching, even without it being pointed out by coaches from other schools, can conclude on their own that the identity of the Kansas football coach for 2019 and beyond is a mystery.

Given that, it makes sense for Kansas coaches to zero in on recruits who have grown up in families loyal to KU, high school students who will give it all they have for mom and/or dad's alma mater, no matter the identity of the coach. Most who fit that profile are from the state of Kansas. Mix in some of Tony Hull's Louisiana magic and it's possible to salvage at least the semblance of a a halfway decent recruiting class.

So far, not so good.

Predictably, things are off to a slow start on the recruiting front for the Jayhawks. Lance Legendre, a four-star, dual-threat quarterback from New Orleans, is KU's lone commitment, which means none of the 33 recruits from Texas and three from Kansas who have committed to Big 12 schools are heading to Kansas.

Two of the state of Kansas' top five high school recruits, per Rivals, are undecided. Both — No. 3 Jayden Russell of Aquinas and No. 5 Jax Dineen of Lawrence Free State High — list Kansas among the schools they're considering. Top recruit, defensive end Marcus Hicks of Wichita, committed to Oklahoma. No. 2, quarterback Graham Mertz from Blue Valley North in Overland Park, is headed to Wisconsin. No. 4, quarterback Easton Dean from Altamont, committed to Iowa State.

A look at how Big 12 schools are progressing in football recruiting:

I imagine this number will be in the three-four range come fall, but nonetheless we are behind where we want to be at this point.

This recruiting class is going to be very dependent on the on-field results this year, but I think it will be top 50 regardless.

Either we bring in an established coach that will have a wonderful university and a promising future in their bag or David Beaty puts it together on the field and we can land the recruits we've been slightly missing on.

I'll put you down for you're completely bat sh*t crazy 4 wins or not. Jesus man start taking youre meds.

*Only Only way top 40 happens is if Tony Hull empties the state of LA. Nothing to do with Beaty. Let DB stick to the mediocre Jucos.

Your posts were starting to get more intelligent and then you blindly try to pretend you have any idea how recruiting rankings work lol.

Bro, do you just state what comes to your mind or something? Our 2019 prospecting class is looking just as good as it was last year. We just didn't get the waste of time commitments this year, much to the satisfaction and doing of our coaching staff.

It's not how the prospect list looks it's how many they can actually sign! At one time last year Kansas ranked above Alabama, but slowly the recruits dropped off and for a 2nd year Beaty had to plug holes with Jucos. Who cares what the prospects are, they could offer anyone, it's who actually signs and commits. You have a Dineen brother who exploring all his options not just coming because his brothers are here.

So, what is K-State's problem?

KSU is a perennial late-filler. Of course, there are also yearly rumors now about whether Snyder returns, so that may also have a dampening effect.

In the end, Snyder is always in the bottom-third of the conference in recruiting and in the top-third in games won. I can't imagine what KSU would accomplish if he put together 3 or 4 top-20 recruiting classes in a row.

Just another reason to pull the plug on Beaty before the season starts. We have one Hull commitment, who will probably keep us on the list pending the new hire.

To me, a really bad scenario for KU is if we are on a death-watch through the conference season. Best-case scenario: KU opens up with three wins in non-con. Then, the losing starts. At what point do you pull the plug? 3-7? Basically, the season is almost over anyway.

By making the move pre-season, we get a major jump on the coaching search. You could literally announce your coach within days of his team's last game. Instead of the season dragging along, you actually build interest. And, who knows, maybe you get lucky and the interim guy hits it out of the park?

You can keep saying it, but it's not going to happen. No way he gets fired before the season starts, but barring what I'm starting to think would be a miracle, you'll get your wish before Xmas

This season's recruiting will depend upon how many wins KU will achieve during 2018 schedule. Two or three early season wins will change opinions more than anything else. Unfortunately, it will probably take 6 wins and a bowl game to save Coach Beaty's job and his assistants. His firing will make the boo birds happy, but the reality is that KU football program will be starting over once again. We will simply be reverting to standards that the KU football program established decades ago and nothing has changed since regardless who the AD and HC were. KU will always be a national caliber basketball school and our football program will always be in second place.

Might agree. However, does”starting over” imply lack of talent & depth for the next coach? If the talent is there, at some reasonably decent level, then is it the coaching which is lacking and thus “starting over” is viewed differently?

Riveting analysis. Just Riveting. next time save us the key strokes.

Firing our AD is the most direct way of telling our head coach this is a make or break season but it doesn't help with recruiting.

Commitments in the Spring and Summer mean nothing to struggling football programs. Many times players commit to a D1 school to get others interested. Look at past history regarding how many early commits changed course when they got a better offer. This lack of "commits" in June means nothing at this point. Nevertheless, if you can't recruit players from Lawrence and much of the state, you got problems.

Kansas won't be able to generate money from boosters and donors with Zenger and Beaty in place, as was proven recently by the pitch from Matt Baty. Girod probably saw the writing on the wall and wanted to get rid of both Beaty AND Zenger, but understands that he only had control over the latter. With the hire of a new AD, which the alignment of stars suggests will come rather soon, Girod is certainly hopeful that Beaty will be replaced, citing the lack of progress and ultimately no fan support (read $$$).

Recruiting will suffer when the position of the head coach is in question.

I'm betting if KU is 1-3 and loses to Baylor Beaty will be gone after the Baylor game and Meachum will be named the interim HC for the remainder of the season.

So many quitters. So sad.

You're right, Dirk. Much better to stick with someone who's 3-33 (with virtually no hope of doing much better this year) than to "quit."

All predictable, given not only the dismal 3-33 (good tee shirt...) but also the negative press around it all (yes, there is responsibility on both the fan base and LJW side for perception of the program, although it far less than the 3-33).

I would be interested in everyone's opinion: How many wins would Beaty have to get this season to get a new contract? A. 4 B. 6 C. 8 D. go undefeated E. No amount of wins will get him a contract