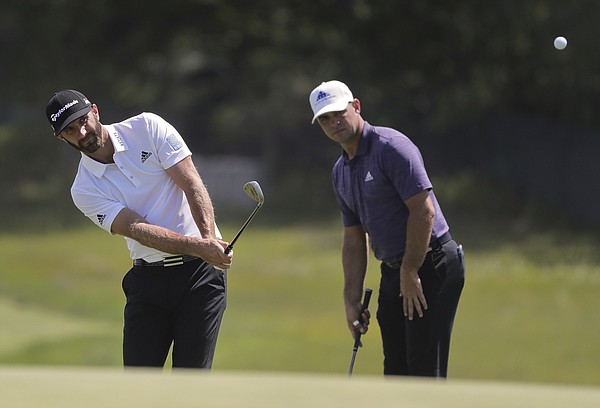 Dustin Johnson chips onto the second green as Gary Woodland looks on during a practice round for the U.S. Open Golf Championship, Monday, June 11, 2018, in Southampton, N.Y. (AP Photo/Julie Jacobson) by Julie Jacobson (AP photographer)

So it's never too tough to guess Gary Woodland's playing partners with a reasonable degree of accuracy. Think long ball.

Woodland, who on Super Bowl Sunday won the Phoenix Open for his third tour title, is coming off a slump-busting, tied-for-23rd finish in the Memorial two weeks ago. Knocked out of contention by a blow-up round on Saturday, Woodland shot 69-68-75-67 for the tournament.

This will be Woodland's eight U.S. Open. He missed the cut three times and his best finish, tied for 23rd, came at Congressional in 2011.

A look at how Woodland, 34, stacks up statistically against the leaders in various categories heading into the U.S. Open:

Four good rounds, that's what did the trick in Gary's most recent win. The Open would be a great tournament for putting it all together.