Kansas baseball recruit candidate to be drafted in first round 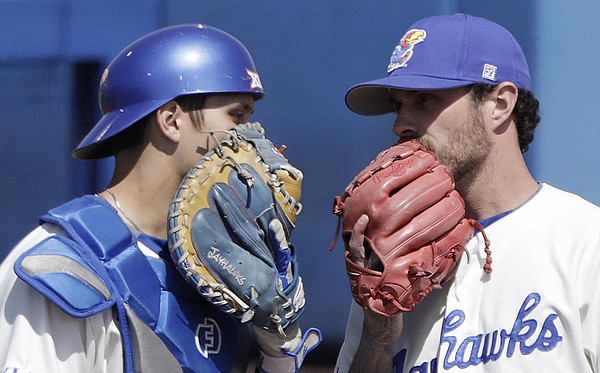 In most sports, a college coach receives a commitment from a high school prospect, tracks his or her progress, and is delighted to see he just keeps getting better and better and better. College baseball is not most sports in the area of recruiting, which brings us to the case of phenom shortstop Jordan Groshans from Magnolia, Texas.

Groshans made a verbal commitment to attend Kansas to join his brother Jaxx, KU’s starting catcher.

The younger Groshans stands 6-foot-4, weighs 190 pounds and is known for his power bat and power arm. As a pitcher, his fastball reportedly has been clocked at 91 mph. Various websites that project the baseball draft have him going anywhere from the middle of the first round to early in the third round. The draft takes place Monday through Wednesday.

So in all likelihood, in order to attend KU, Jordan Groshans would have to walk away from a seven-figure signing bonus. That would be quite a gamble, although since he projects as a shortstop, not as great a risk as if he were a pitcher because the chances of injury aren’t as great for a shortstop as a pitcher.