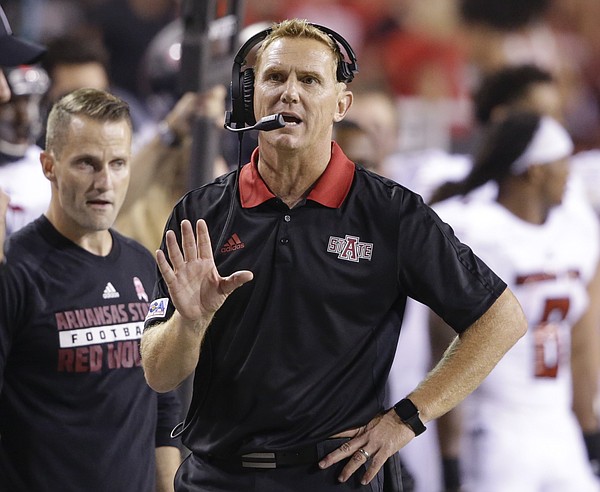 One advantage of hiring an existing head coach compared to an assistant coach ready to head a program for the first time involves the assembly of the staff of assistants.

A head coach can bring most of his staff with him, which eliminates concerns over how a staff will jell. The duties are defined, and the coaches don’t have to waste time figuring out how to stay out the way of each other.

Typically, though not always, coaches get their first head coaching position from outside the power five. Clemson’s Dabo Swinney is a notable exception. Mark Mangino was able to turn around Kansas in his first job on the top of a staff.

Usually, though, coaches get their starts at schools in conferences that now are lumped into what has become known as the “Group of Five.”

The MAC seems to be the most fertile coaching ground of all.

Woody Hayes, Ara Parseghian and Bo Schembechler all coached at Miami of Ohio.

Names of “Group of Five” head coaches are on small pieces of paper stored in the pockets of athletic directors from coast to coast.

With that in mind, I thought it would be interesting to take a look at what existing head coaches not at power five schools might work their way onto the lists of schools in the great plains region, should one happen to be in the market for a head coach after the 2018 season.

The next 10 Lunch Break blogs will feature coaches, listed in reverse order of how hot a prospect they project to be when the next coach-shopping season hits.

No point in listing coaches who would not be interested in taking on a monumental challenge in this region of the country.

Why he made the list: When Larry Fedora was hired away from Southern Miss to North Carolina, he took Anderson with him as his offensive coordinator. Carolina put up monster offensive seasons in Anderson’s two years there and Arkansas State hired him as head coach. North Carolina’s offense hasn’t been the same since Anderson left.

The Red Wolves opened last season at Nebraska and nearly pulled off the upset, losing 43-36.

Obviously, that wasn’t a very good Nebraska team, but that counts as a impressive performance for a Sun Belt school playing in front of 90,171 Cornhuskers fans amped about the start of a new season.

Anderson has coached Arkansas State into a bowl game in each of his four seasons and won Sun Belt titles in 2015 and 2016.

Winning a third title in four seasons in 2018 would help Anderson’s chances of breaking into the power-five coaching ranks.

A native of Hubbard, Texas, he played at Baylor and then Sam Houston State.

These are all guys I’d look at first. I’ll be curious which, if any of them, show up on your list. These are in no particular order by the way.

I had Dave Doeren on my list but NC State extended his contract and a buyout would be around $4.5 million. Correct me if I’m wrong on that though.

For the purposes of this list — existing head coaches not at Power Five — Clawson, Warinner and Venables would not be eligible. Most, but not all of the rest on your strong list, are on mine as well.

Makes sense. Cool article though. I look forward to seeing who the others are and how you rank them.

Mangino notwithstanding -- at this point moving forward with the coaching landscape out there there is ZERO reason KU needs to hire someone who isn't a head coach. Zengy did it with Beaty and thought he was doing the school a fiscal favor by bringing in a guy for only $800K -- then he doubles his salary after doing ZIP. That $ saving mentality is a joke. You get what you pay for. If the next head coach isn't a successful head coach someplace NOW - we deserve another decade of crap.

Just out of curiosity, would Turner Gill have made this list in 2010 (be as objective as you can)?

He wouldn't have been on my list, but I had a brother who lived in Buffalo and he was so high on him if I had run list past my brother I might have been talked into it.

I don't know everything, but I'm about 100% sure Dave Beaty isn't checking in on kusports.com every morning!!!

There should only be one on our "get' list and it is Les Miles. Are we serious about taking a real chance and turning the program around for the long term with a proven winner? He's looking for a place where both the AD and Chancellor are truly committed to winning.

Based on Long's 5 yr contract I would say Girod is committed, or needs to be committed one or the other.

He wants another chance at a league/national title. He has the best track record among unemployed former FBS coaches. He is 64 years old. Saban is 66 and shows no signs of slowing down. He wants to be an actor. We know actors who are HUGE KU fans who can help with that during the summer down-time months. He knows the Big XII and the recruiting region.

So in deference to Tom's next 9 days of what I am sure will be very interesting articles for teams like K-State who will be looking for a head coach at the end of the 2018/2019 season, lets get right to the 5yr contract and casting couch and get Les signed and start the rebuilding road to a bowl game..

If this is actually Les Miles, blink three times.

I agree with Les Miles. You want a Nat'l presence in recruiting and media coverage? GET HIM HERE!!

I would agree to Miles - if and only if -- he is hired and brings with him a hand-picked, impressive, recognizable head coach in waiting so that when Miles wants to leave in 5 years we hit the ground running and continue his success he's built. maybe that's Tony Hull - keep the Louisianimals pipeline in play....and make Bowen a position coach where he excels, not the DC.

If Long does decide we need a new Coach and hires Les Miles when he could have hired one of these young up and comers, he needs to be fired. Les Miles was fired for not winning sufficiently at a school with everything going for it including in state talent. The reason he failed is he could not mount an offense and develop a QB. I want no part of Les Miles.

Top 5 LSU v. Alabama games Miles v. Saban. Actual excitement at a football game would be something KU fans have missed for awhile.

Les Miles would be a terrible hire. If we're gonna do that we should have kept Charlie Tuna. We need a young guy like Glen Mason or Scott Frost or jim Leonhard. Recycling losers got us where we are. And yes, Miles did win a national title but he underacheived. Enough with Miles, or Pelini or some other horrible hire.

Am I the only one who finds it rather classless to run a series of articles about the best 10 replacements for a football coach before we even see the first game of the season? It looks to me like this whole thing has become a personal vendetta on Keegan’s part.

Les Miles may or may not be the best fit as the KU football coach, but he is hardly a loser. His career won/loss record as the coach at Oklahoma State and LSU was 141-55. His last full season was 2015 and he was 9-3.

You're not the only one...count me in, maybe not "classless" to me but certainly feels a little dirty

No, Michael, you are not the only one and it is classless, but, after all this is a Tom Keegan blog, what do you expect?

Yes, you are the only one. I am sure by all accounts he and his whole family are nice people but he got paid and then some. And if true used a potential OC offer at Texas while our head coach to squeeze more money out of our program based on zero performance results. If true, he is no better than Gill's or weiss' money grab. As Evita said, Don't cry for Beaty. He will be just fine.

You have sunk to an all-time low Tom.

Why because Tom is calling it like it is? We shouldn't be at this point anyway because Zengy failed to fire Beaty so this season is the most lame duckist lame duck season that ever lame ducked. Keep quacking Tom