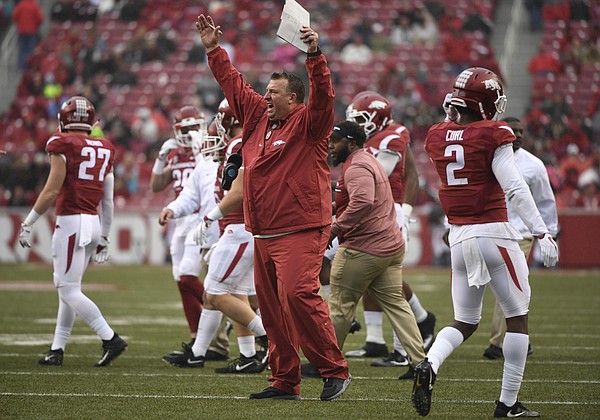 In this Nov. 18, 2017, file photo, Arkansas coach Bret Bielema talks with the officials during the first half of an NCAA college football game against Mississippi State in Fayetteville, Ark. The Razorbacks are dealing with their own dose of turmoil at the moment. Last week’s 28-21 loss to No. 16 Mississippi State guaranteed Arkansas’ third losing season in the last six years, and it came days after the school fired former athletic director Jeff Long. There’s likely more uncertainty ahead in the days following Friday’s game against Missouri for Arkansas--in particular for fifth-year coach Bielema. (AP Photo/Michael Woods, File) by Michael Woods (Associated Press)

The money frittered away by college athletic departments always has blown me away. So often athletic directors grant coaches contract extensions with no urgency to do so, no suitors trying to steal the coach, and in some cases the extensions come with monster buyouts.

Kansas football coach David Beaty had a 2-22 record when he was granted an extension that came with a doubling of his salary. Good thing he wasn’t 4-20 or KU might have had to sell naming rights for Allen Fieldhouse to pay for his salary.

I never have been able to confirm the theory that Beaty leveraged a supposed offer to become Tom Herman’s offensive coordinator at Texas to get the raise. If that’s the case, that makes it even worse. A 2-22 coach has no leverage. The $3 million buyout seemed excessive, too, even though Turner Gill was paid $6 million for games he never coached, Charlie Weis $6.67 million.

But there have been far worse buyouts written into contract extensions by athletic directors for coaches with losing records.

Where was the urgency for Arkansas AD Jeff Long to extend Bret Bielema when he had a 10-15 record two years into his tenure at Arkansas? Long was fired and then Bielema was shown the door with a 29-34 overall record and 11-29 mark in SEC play. Shed no tears for Bielema. His parachute, courtesy of Long, was $11.9 million.

Oh well, you say, that’s the cost of doing business in big-time college athletics. OK, then that’s what makes me think going outside the world of college athletics for its next AD just might be the way to go for Kansas. Or at the very least, hiring someone who has a clean record for not blowing other people's money and not making football hires that blow up.

I hear you Tom and with the money KU has spent lately it makes sense to hire outside and avoid any buy-outs. But if they hire someone outside of college athletics that person better know what the heck they're doing especially in regards to football.

I personally think Joe Parker should be the guy. He's solid and has a good resume.

I like Joe Parker's resume too. Resumes only tell you who's worth interviewing, not worth who's hiring.

And that’s why I’m glad I’m not doing the hiring.

Regardless of the "inside" vs. "outside" approach, what is critically important is the search committee's ability to pick one with a good "eye" for hiring head coaches capable of that same distinguished "eye" for talent (assistants as well as players).

Example: Brooklyn Dodger President & General Manager, Branch Rickey, noted for his ability to pick out a player from "a moving train 300 feet away". Too bad he's not around to help the search committee.

It's still obvious that a committee of the Chicken Littles is the answer. You know who they are. How else could KU get so much pure genius for so little $$?

These are experts who would win every game, sign every recruit and get every facilities project done to perfection. All this while firing every coach every year.

It's the best choice.

Tom, I appreciate the innovative thinking. Frankly I would never have really considered this approach.

The buyouts, though they may become commonplace, are an incredible drain on our ability to hire the right guy.

And that’s how you get the worst P5 football program in America. In fact, I don’t think we could have done worse if we literally tried to bottom out the program.

Maybe it is time for something new.

Now I'm not some insider or anything so l don't know if its true that Herman wanted Beaty at Texas. But how in the world could that have been true. He was a terrible offensive coordinator at Rice. After he fired his offensive coordinator here and became the OC he was worse, so I really don't see how that could have been remotely possible

So long as KU football and other programs are privately funded, I keep my disgust for their irresponsible financial practices somewhat quite...as well as my wallet. It's up to the donors to keep the program under control. If I were a major donor, no way would I have ever supported Perkins.

Unfortunately, the environment we're in, buyouts are just part of the cost of doing business. I'd be willing to bet that every head coaching contract has a buyout clause. It's not limited to coaching either. Most CEO's (right or wrong) have a buyout. Even in the medical field, most doctors have a buyout.

As much as it sucks that we're paying coaches not to coach here any longer, if KU refused to include a buyout in a new coaches or AD's contract, we'd never get anyone worth hiring.

so tom, are you applying for the job?

How can the AD grant these benefits without the consent of the Chancellor? Seems to me the buck stops there rather than in the AD's office. Why don't the CEO's of the campus' put some fiscal restraints in place if the AD's are spending money like a bunch of drunken sailors?

The athletic department is not funded by the university itself. KU Athletics is a private company that is financially dependent on TV contracts, apparel contracts, and donors for the vast majority of its funding. While Bill Self makes a lot of money as basketball coach and is considered an employee of the state, he only makes about $275k from the state, the rest of his annual salary comes from donors.

Great idea! We have a program which has arrived at the bottom of the barrel by the hiring of poor football coaches. So let's change things up a bit. Let's hire a guy to hire u s a coach who is an expert in the grocery business and would not know the first thing about hiring a football coach. That sure sounds like a winner. Why not try to hire a competent AD as the first step in serving under a competent Chancellor and then let him evaluate the football program and make decisions based on his knowledge and expertise acquired over years in the business of athletics. This sounds like a better idea. The fact we have failed in the past does not mean success cannot be had by way of conventional methods. It means we have to do a better job of evaluation and the first step is to hire someone who knows this business.

Not really any different than how KU is using an outside search firm to find the next AD currently.

The buyouts are meant as a disincentive to termination. They are not the problem. An inability or an unwillingness to give time to a coach is the problem. Neither Gill nor Weis were given enough time.