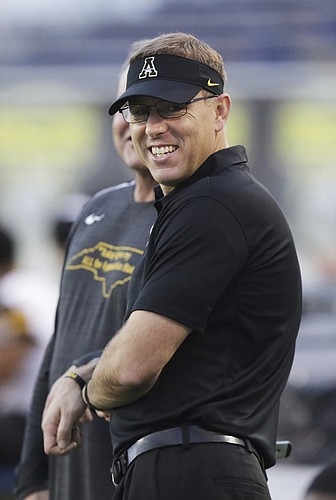 For today’s installment of a 10-part series looking at “Group of Five” coaches ready for “Power Five” jobs, we look at a leader who doesn’t have any ties to the region, but is doing mighty impressive things coaching at the school for which he once played quarterback.

Why he made the list: The first statistic that jumps out about Satterfield, a native of Hillsborough, N.C., is his bowl record: 3-0. All three came in games against MAC schools. Appalachian State defeated Ohio, 31-29, then Toledo in back-to-back years, 31-28 and 34-0.

Satterfield’s Mountaineers finished the 2017 season on a tear, drubbing Georgia Southern, Georgia State, Louisiana and Toledo by a combined score of 155-30. That finish improved Satterfield’s record the past three seasons to 30-9. He has spent 22 of the past 27 years on the campus in Boone, N.C., as a quarterback, assistant coach and head coach.

Satterfield, guided his alma mater to a seamless transition from the FCS to the FBS and now has another tough transition to make: Life without Tyler Lamb, a four-year starter at quarterback.

The well-coached Mountaineers last season ranked 11th in the nation in turnover margin (plus-12), 21st in scoring defense (20.2 points) and 30th in scoring offense (33.5). Satterfield isn’t someone with his head up looking for the next job. It’s obvious he means it when he says he likes the idea of his children living in Boone, but Appalachian State can’t compete with the kind of money that will be thrown his way.

Satterfield's warm, grounded personality makes him a natural for recruiting and he obviously knows how to judge talent. He's the whole package.

If an opening surfaces in Chapel Hill soon, that’s the school that might have the easiest time wooing Satterfield from his comfort zone.

Yesterday's coach impressed me more than this one.

A transition from FCS to FBS can't be easy. And he did it without missing a beat and getting even stronger. He's a really good coach and I'm 100% sure App State could beat Kansas. Although I'm certain most teams in the FBS can at this point.

There's one guy that's on my list. I agree with you though that he seems happy where he's at, and if he did leave App State it'll be for UNC. Either way, heck of a coach.

When does Keegan come clean about his grudge and report honestly?

Keegan has been way too kind.