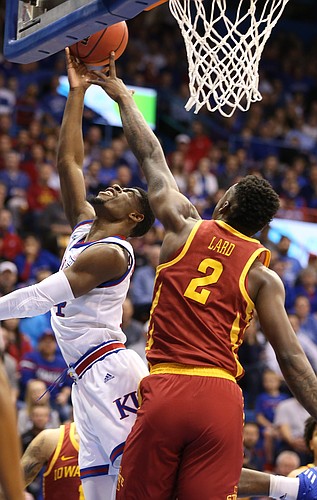 It's a terrific year for freshmen in the Big 12 and two very talented ones await Kansas tonight in Hilton Coliseum.

Point guard Lindell Wigginton and post player Cameron Lard combined for 41 points in leading Iowa State to an 88-80 victory Saturday against Oklahoma. Wigginton, the best Canadian prospect in his class, totaled 26 points, five rebounds and five assists, compared to 22 points, five rebounds and 11 assists for Sooners sensation Trae Young. Lard, a 6-9, 225-pound native of Louisiana, was every bit as instrumental in the victory, dropping 19 points and 17 rebounds on OU.

Wigginton, a strong, confident, 6-2, 188-pound athlete armed with a soft shooting touch, and Lard had big hands in ISU hanging tough against Kansas in an 83-78 loss in Allen Fieldhouse. Wigginton made 4 of 8 3-pointers and scored 27 points and Lard produced 15 points and 10 rebounds.

Nothing about the way Wigginton plays reveals his youth. Lard plays like a typical freshman big man in one respect. He has trouble staying out of foul trouble and has fouled out of three games.

It's a game Kansas should win. The oddsmakers favor the Jayhawks by 6.5 points, but thanks to two very talented freshmen, it won't be an easy stop on schedule that doesn't have any of those. Wigginton and Lard won't be the last tough freshmen Kansas faces. Oklahoma, Texas Tech and Texas also have talented freshman duos.

A look at the Big 12's best freshmen, listed in order of their scoring averages in conference games:

One of the keys to this game is to drive it inside and pick up fouls on Cameron Lard. Negate their foul prone big man before they do the same to us. If KU plays smart, we can win this at the foul line (or go a long way towards it) with Newman and Graham driving the ball and picking up some "and 1's".

It's sad not seeing a Jayhawk on this list.