This is not your older brother's Nicholls State team 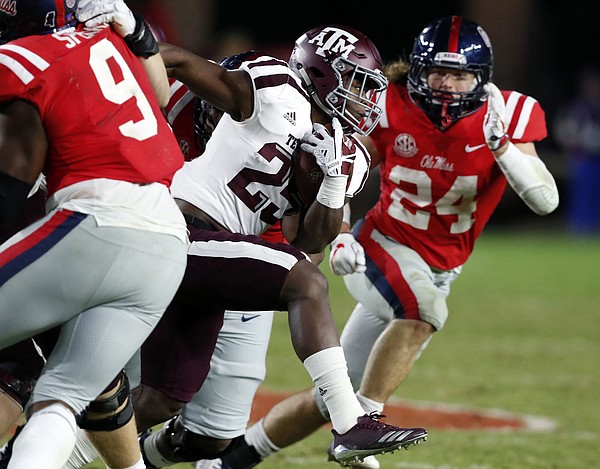 Nicholls State seemed like a safe tomato can for Kansas to pummel in the season-opener when the game was scheduled, but the Colonels are one of the more impressive turn-around stories in college football.

And Kansas isn’t the only school to add talent via the transfer route. Junior running back Kendall Bussey transferred in after rushing for 237 yards for Texas A&M last season.

All three of KU’s nonconference games have at least one thing in common: It wouldn’t come as a surprise if Kansas were to win or lose any one of them.

(I know they are fbs or some other wording, but everyone understands DI and DII).

Everyone understands DI and DII except maybe you? Nichols State, the Southland Conference, and FCS are Division !. That's why they can potentially play us in March Madness.

I'm not one of the crazies but if we lose to Nichols State, then I'll join the crazies and demand we fire everyone.

Wondering.....does KU accept all or most class credits from Nicholls State?

“.....stories in college basketball.” Huh? We are scheduled to play them on the football field, correct?

I saw that one of the big time "Last Chance U" players is on their roster at DL and last year he wasn't even starting. They have some guys who can play for sure.

Ronald Ollie. Should be fun to watch. And then we'll get to see Dakota Allen play when we go to Tech. Unfortunately that'll be an away game. But Allen is the real deal.

They are a good team and would give more teams than just Kansas a tough time. I honestly think if we do beat Nicholls, though, we can beat CMU. But if we lose to Nicholls, I'm not so sure we can handle CMU. Which will be a very sad note on a long and already depressing song.

It might not come as a surprise if we lose but it will definitely be a big disappointment if we lose any of the three. Fourth year coach on heavy Junior/Senior laden team in the Big12 should win all 3. Based on if and how they win those 3 we can then discuss expectations for the conference schedule. I believe we have to change the conversation to expectations set higher than previous performances. Fair expectation (IMHO) is win 3+1 and be competitive in at least 3 other games. That is the baseline for coach to have a conversation for another year at KU. I think that goal is achievable and will be rooting them on. RCJGKU

Last year Coach Beaty set the bar at 6 wins. Why are you lowering the standards? We shouldn't lower the standards because of past performance.

Think you have it nailed, Eric.

From the sounds of this team's coach....KU will be outcoached. Game. Over

Tim Rebowe was recently named Coach of the Year (for 2017) by the Louisiana Sports Writers Association.

Call me one of the crazies, when the first game of the year is against a DII school and we aren't picked to win by 30+ it's a problem. When the general consensus is that it is going to be a competitive game, it's a bigger problem. I realize there is an occasional upset of DII schools over DI, but they generally are far and few between, not every couple of years and usually when the DI school is expected to win by 30+.

When a coach is in a P5 conference, and has yet to beat anyone in DI non-conference it doesn't drive up expectations.

Finally, when a coach has played 27 games in conference and only won once it truly is amazing he is still coaching at the school.

KU deserves a better coach. Did you know that if Beaty goes 6-6 this year, he will still have the lowest winning percentage of any KU football coach in history?

I guess I would be happy if we beat Nicholls like Georgia and A&M did the last two years.

You need to research what D1 and D2 schools are before you get critical.

A&M beat them by 10 (24-14) last year, so they can definitely be competitive with and FBS team. Guessing they were overlooked on the schedule. Shouldn't be a problem for our team.

What is also amazing is that FBS program could field a team with fewer scholarship players than their FCS opponent. Coach Beaty has done a commendable job rebuilding the roster, and unfortunately doesn't get to compete in conference against Incarnate Word or Houston Baptist.

"Fourth-year coach Tim Rebowe inherited a program coming off an 0-12 record and has gone 3-8, 5-6 and 8-4."..this sentence right here is whats wrong with KU FB....this D2 level coach took on a winless team and in 3 years had them 8-4...many of the guys who were on the 0-12 team were also on the 5-6 team and 8-4 team..it isnt just about talent...a good coach makes his players better..KU hasnt shown an ounce of improvement under any coach since Mangino..that tells me the coaching hires have been horrid

People who ignore the comparison are the crazies...

....because beating small schools nobody has heard of from places nobody could find on a map is the same as playing in the Big12.....

Come on Jay. Abilene Christian, Incarnate Word and Houston Baptist is a gauntlet in any schedule. And getting blown out by Sam Houston really isn't any different than any B12 game.

Not that exemplary insights are to be expected from analyst that don't even know the difference between D1, D2, FBS, and FCS.

Funny. That's exactly how I feel when you attempt to join adult conversations.

You apparently missed the fact that Beaty inherited a team with zero players receiving recognition for their play, and developed a roster with 5 players receiving post-season awards and 1 being drafted. Dorance and the others obviously were all elite players when they showed up on campus. That's why they were all so highly ranked by recruiting services.

3-33 is not good, but that doesn't mean everything about the program has been bad. An ounce of insight into the program would reveal as much, or you can throw up your hands like so many screaming quitters.

Beaty has amassed what is essentially a juco all-star team, with a few exceptions.

Most of the players on KU's roster would have probably accepted an offer from Nicholls State rather than going the juco route had Nichols State seen enough potential in them to offer them a scholarship. To presume that KU is more talented than Nicholls State would be a false presumption.

There is no evidence that Beaty has any ability to consistently evaluate Big 12 talent, because very few KU players would even make the roster of most Big 12 teams.

Commenting that KU is better than Nicholls State because KU has had the pleasure of being embarrased by more talented, big 12 opponents is simply nonsense.