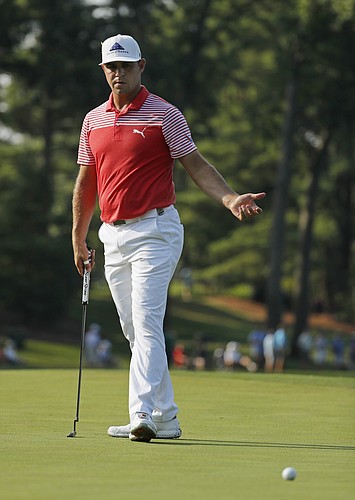 Gary Woodland reacts to a missed putt on the 12th green during the second round of the PGA Championship golf tournament at Bellerive Country Club, Friday, Aug. 10, 2018, in St. Louis. (AP Photo/Jeff Roberson) by Jeff Roberson (AP photo)

Gary Woodland was probably a little light in estimating that 75 to 100 spectators came from Kansas to watch him compete Thursday in the first day of the 100th PGA.

I ran into a grandmother, husband, wife and four young children who made the trip from Overland Park to watch Woodland. Former Lawrence High star and University of Kansas walk-on Stephen Vinson and his family followed Woodland, a former AAU basketball teammate of Wooldand’s.

“Gary was a shoot-first point guard, but to his credit he could shoot from his far away from the basket as anyone I ever played with,” Vinson said on a bus ride from a hotel to Bellerive Country Club before Woodland teed off Thursday. “He had great range from a young age. He would be a good three, four steps behind the NBA line and he still would shoot. That was the part of the game he enjoyed the most. He was a really good shooter.”

I bounced my theory that shooting a basketball and putting are similar skills and that I’ve always maintained that a good putter is somewhere inside Woodland just needs to be freed.

“I would agree,” Vinson said. “He was a very good baseball player too, a very good shortstop. I played against him in baseball. That wasn’t very fun either. Like a lot of kids, if you’re good at something, you’re good at everything.”

Vinson said Joey Devine, who went 8-3 with a 2.75 ERA in seven seasons in the major leagues as a reliever with the Atlanta Braves and Oakland A’s, was on the AAU team also.