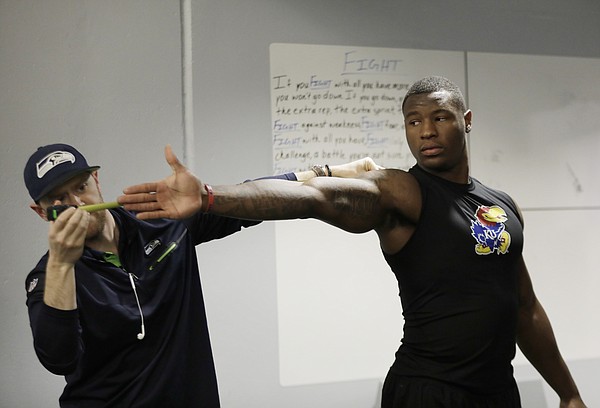 Dorance Armstrong has his wingspan measured during the Kansas football Pro Day Tuesday at the Anderson Family Football Complex. by Mike Yoder

Two factors weigh against Kansas defensive end Dorance Armstrong, an early entry into the NFL draft: His 40 time of 4.87 and 2017 sack total of 1.5.

Put it all in a blender and what does it spit out in terms of where Armstrong will be selected in this week's NFL draft?

I'll set the over/under at the 124th overall selection, which comes in the fourth round and belongs to the Kansas City Chiefs.

I'd like to hear feedback on whether Armstrong will go before pick No. 124 or after and why.

So what do yo say, will Armstrong go before or after selection No. 124 in the NFL draft? The first round takes place Thursday, the second and third rounds Friday, and the fourth, fifth and sixth rounds Saturday.

If Armstrong were to go to the Chiefs at No. 124, that would make him the highest Kansas draft pick since safety Darrell Stuckey went to the Chargers in the fourth round with the 110th overall selection in 2010.

I think Harris is the only Jayhawk with the Broncos. Talib signed with Rams. But given the success Broncos have had with KU players, that's probably a good call.

Kansas City doesn't ever seem to draft players from KU in recent years. When they first started out in the old AFL, they drafted a few Kansas players.

It's been 21 years since Chiefs drafted a Jayhawk (Isaac Byrd). They did sign Bradley McDougald as an undrafted free agent.