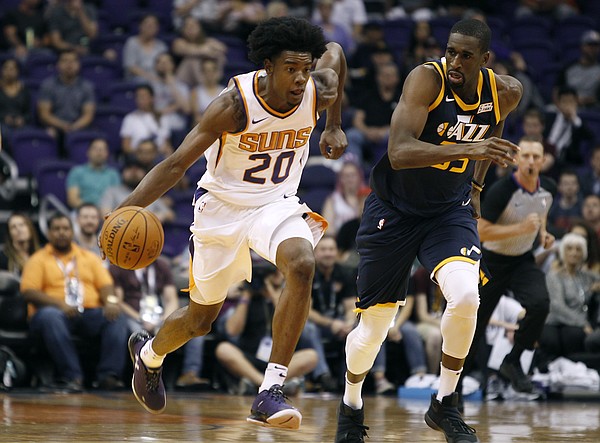 But if hardware existed for in-season improvement, Jackson would be leading the pack, which bodes well for his chances of passing those having better rookie seasons.

A look at Jackson's improvement since the All-Star break, compared to some other rookies from this past draft:

Unless you feel that he shouldn't qualify because he was drafted in 2016, then Ben Simmons should and will win the ROY hardware. I would love to see Josh Jackson on a team that isn't tanking.

Andrew Wiggins is one win away from his first postseason appearance in the NBA. Embiid should make his postseason debut before the end of the first round upon returning from facial surgery. Lots of Jayhawks will be on NBA rosters. The Morris Bros and Kelly Oubre will also play prominent roles for their teams this postseason. Also there is an outside shot that the Morris twins could match up against eachother in the first round of the playoffs which could be a very entertaining series between a Boston squad that lost Kyrie Irving but gets Marcus Smart back in time for the playoffs, and a Washington squad that appears to be much better than their record after John Wall's return from injury.

No surprise to me about Josh. We all witnessed first hand his competitiveness which generally leads to improvement. I think Josh is going to be a star in the NBA for quite a long time. In fact, I think he'll be an All-Star by year four, when he'll still be in his early 20's.

Josh's biggest weakness was his shooting, and that is the number one skill that seems to improve for a lot of players in the NBA. Easily my favorite O.A.D. Jayhawk. Loved the attitude, the hustle, the competitiveness, the energy.....He's on his way.

The things the chart did not show, competitiveness, rebounding, defense, willing to compete night in night out. Those are the things we all saw. I would even go so far as to say that Jackson in his second year just might have been enough to get by Villanova.