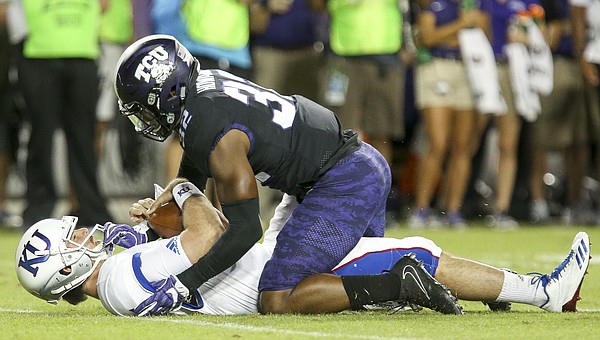 TCU linebacker Travin Howard (32) gets up off of Kansas quarterback Peyton Bender (7) after sacking him during the second quarter, Saturday, Oct. 21, 2017 at Amon G. Carter Stadium in Fort Worth. by Nick Krug

Wondering if Kansas just finished the most one-sided three-game losing streak among FBS schools, I did some calculating and found out that another school had an even greater margin of defeat during a losing streak.

But Kansas did have the second-worst, ranking behind (or is it ahead?) of only San Jose State.

A look at the worst three-game losing streaks in terms of combined margin of defeat for FBS schools in 2017:

So if we get shutout by K-State this week, we'll be number one on this list.

What an absolutely worthless 3 sentence "article" for the purpose of throwing out the same old gnawed-on-bone to fans?

Just watched Wilbon and Kornheiser on PTI agree that Kansas is the worst Power Five football program in the country. They highlighted our back-to-back shutouts.

And crickets from Girod.

21 yards of total offense. What else will it take for Girod to get off his fat butt and do something? Does he have any pride in this University? We’re a joke to ESPN, we’re legitimately worse than last year, and we’re losing recruits. It’s rock bottom and if action isn’t taken immediately we’ll be left with either Beaty and Zenger for another year or the leftover scraps from other football programs who will need coaches after this year.

I agree. I'm not usually a fan of firing coaches mid-season, but there's a lot of coaches at better programs that are currently on the hot-seat and if we wait too long to begin a coaching search, we'll be left behind when the coaching carousel starts.

What??? Why in the WORLD would we go after a coach on the hot seat elsewhere??? Bring in a coach who can't win elsewhere? This is the pathetic mentality that has gotten us into trouble in the past. Hiring 2nd tier coaches to get a cheap deal on their salary? How's that working for ya? We need to go after a coach on the climb who has turned over programs before. And pay them well what they are worth and more. If not, let's just go to the FCS level and let the fball program keep floundering.

I guess I wasn't clear in my comment. I wasn't suggesting we go after a coach on the hot seat. What I meant was, as soon as those coaches get fired at the better programs, they'll be looking for new coaches and the best candidates will likely choose those jobs over KU. I was suggesting we start our job search before those hot-seat coaches get fired so we have a better chance of landing a quality candidate.

See below - sorry for the misunderstanding.

I rest my case.

OH -- my bad Lewis. I think I see what you are saying now. That we get in line to get a coach who might go to other schools who are canning their coach too. Gotcha. Sorry man. We are of the same mind. But I still say NO to any second tier coaches.

Whoa! Lets not over react. We have not completely hit total rock bottom yet. We keep proving each week there is in fact more room to slide deeper down this endless hole. With that said, and having several more weeks of football left we could possibly still.... 1) Have way more purple show up to our home game. (KSU) likely 2) We still have a small handful of recruits left to lose. likely 3) We could have a game in which no fans show up (getting less and less each week) 4) We could have a game in which no players show up. *(Many of them have already mentally checked out. That is obscenely obvious.) So when you say hit rock bottom to get a reaction from the administration.... It makes me wonder which of these will be the final straw.

*Bring on Les Miles. He can fix this and was in Ft. Worth Saturday

I have no idea how Les Miles got a TV job. He was awful.

Miles was 21-13 in conference his last five years at LSU. Not bad, but certainly not special. At 63, the question would be whether or not he has the energy to attack a rebuild at a school where he has no real emotional tie.

To me, Fritz, Calhoun, Pellini, Bohl and Leavitt comprise your short list.

And if you move that back to 6 years, he went 29-13. Further, five of those losses were to national title contender Alabama.

Long story short, I'd kill for even half as good a record in the Big 12.

Leavitt and Pellini are dirtbags. No thanks!

Not all hot seats are equal. At some football power programs winning coaches get fired because they can't beat certain teams. Still...such coaches would be successful at KU...where we would just like to win against anyone. Hell I'd settle for .500 right now.

The best job going to be open is likely Tennessee, maybe Arkansas, Sumlin at A&M is not a fan fave. Les Miles, Chip Kelly would pick any of those before KU.

That's why I gave the list. I don't think Miles would even consider messing with KU when the Tennessee, Arkansas and Missouri jobs might all be up for grabs, even if you tried to make an argument that he was our first choice.

We'll be picking from a group of guys who need a way back or a way out. I'm not a Pellini expert, but Nebraska fired two coaches who averaged 9 wins a year. They think a little too much of themselves. So, Pellini is definitely in play for me.

We need a professional coach. Someone who has proven they can do it. Anyone on my list has done it, an all could be considered viable candidates.

If we can't get Doeren, which we won't at this point, Fritz is a great choice. Champion on many levels. Kansas connection, TX connections. Program turner. Affordable. Pay him $2.5. Keep Hull as RB/Recruiting Coord.

Tom, I hope you are proud of yourself for your trash the KU football team articles. Remember, Karma goes around and returns to the sender.

Maybe you're on to something. KU trashed Mangino, and now...

John, still waiting on your article highlighting all of the successes of this program. These articles should and will continue as long as KU embraces the idea that having the worst football program in America is acceptable.

The only positive thing in this article is that the Hawks aren't on the list twice. Why not nab an up and coming juco coach? Some of the guys in the Jayhawk Juco conference are doing great things, and some of the guys they coach are good enough to play for us. The guy at Garden City just won a national title.

KU has one goal in football: to outright own every single record of futility that can be thought up. And you know, we have an excellent chance of getting there. This program is a disgrace. Even the stadium rebuild looks pathetic.

Why can't we do like Minnesota or Colorado State? Why are we putting lipstick on that pig?