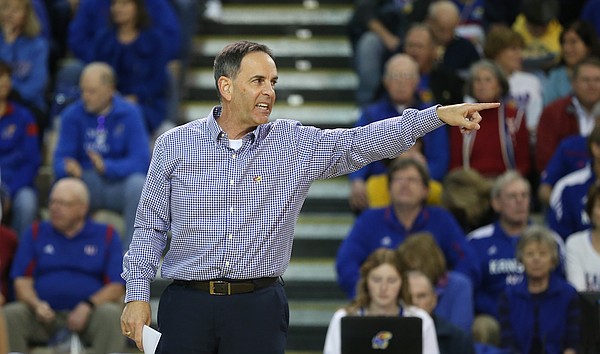 Kansas head coach Ray Bechard gives instruction to his players during the first set on Wednesday, Nov. 8, 2017. by Nick Krug

The magic for the Kansas volleyball program started when the Jayhawks made a thrilling run into the 2015 Final Four and continued through winning the 2016 Big 12 title, a pair of program firsts.

Kansas has a number of quality victories since then, but the magic is on hiatus.

Creighton bounced KU from the 2016 NCAA tournament in a second-round, five-set match in Horejsi that went to extra points. Kansas (22-7 overall, 11-5 in conference) finished this season’s Big 12 schedule tied with Iowa State for third, five games behind Texas and two games behind second-place Baylor.

One thing hasn’t changed from the 2015 Final Four team that advanced to Omaha with an extraordinary comeback from a 13-9 deficit in the fifth set of its match against No. 1 overall seed USC: All-Americans Ainise Havili and Kelsie Payne and fellow senior Madison Rigdon, an all-conference player, remain the key trio for the Jayhawks.

Can they rekindle the magic?

KU made the tournament field for the sixth consecutive season. In the previous five, the Jayhawks played the first two rounds at home. This time, they travel to Wichita State and have a first-round match at 6 p.m. Friday against Missouri. Wichita State faces Radford at 8 p.m. and the winners of those two matches meet at 7 p.m. Saturday.

“Last year, I just thought we were maybe a little emotionally gutted because we want to win the Big 12 so bad,” KU coach Ray Bechard said. “We played a lot of five-set matches at the end of the year, so we really backed off our training. I think it being the first time having gone through that process we could have handled that a bit better.”

The inevitable exhale after claiming the first conference title in school history put the Jayhawks at risk of not regaining their edge. It was a different feel from 2015.

“Two years ago we were on a pretty good run (heading into the tournament),” Bechard said. “We were disappointed we didn’t win the Big 12 and we had a lot to prove in the tournament. I think that would resemble this year, the fact that the regular season didn’t work out in some ways like we had hoped.”

Texas won the Big 12 in 2015. In the Final Four, Nebraska defeated Kansas in four sets and then swept Texas in the national-title match.

KU's refusal to play Wichita State doesn't sit well with Shockers fans, which could lead some in the crowd for Friday's Missouri-Kansas match to root against the Jayhawks.

“I would like to think they’d root for somebody from Kansas, but that’s up to them," Bechard said. "They’re good volleyball fans. We have a good relationship with Wichita State in volleyball, respect what they’ve done. We’ve met, butted heads a couple of times the last few years in the NCAA tournament. We’ve had mixed results, won one of those and lost one. Coach (Chris) Lamb has done a great job and I’m sure the city of Wichita is very excited about the opportunity to host.”

It might not take magic to survive two matches in Wichita to advance, but it will take better volleyball than Kansas played in its final regular-season match, a five-set loss to West Virginia in Horejsi.

A good time to rekindle it would have been during the season when the most casual fan knew there was an issue on the team. Naw let's do it before we play a team that will actually be fired up to play Kansas in the NCAA's!