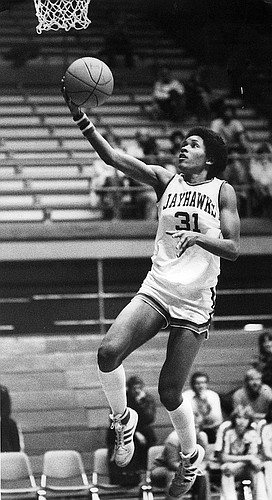 Without cheating, name the leading scorer in Kansas basketball history. If you said Danny Manning, you are wrong.

The correct answer, of course, is Lynette Woodard, who on Monday was promoted from interim head coach to head coach of the women’s basketball team at Winthrop University in Rock Hill, S.C.

Winthrop went 2-29 this season and 0-12 after Woodard took over for Kevin Cook, suspended in January for what the university described as a “personal matter.”

Woodard, inducted into the Basketball Hall of Fame in Springfield, Mass., in 2004, was introduced as head coach at Tuesday morning press conference.

“They’ve been through a lot, but I know that they’re winners in their heart and we’re going to work together to get this thing turned around,” Woodard said of her players at Tuesday's press conference. “I know the progress that they made this year. We’re going to continue that from the moment we step back on campus. I have a vision for this team. I’m going to share it with them. I want them to catch the vision, as we build the vision, so that we can work the vision.”

Woodard’s speech at her Hall of Fame induction was a memorable one, particularly when she thanked her “wonderful mother.”

Woodard said her mother, “just allowed me to play when I was growing up. She didn’t burden me down with a lot of chores. She just said, ‘Go baby, you do your thing.’ ”

Lynette Woodard was a terrific player. I remember watching her play.

Got a feeling Winthrop is going to start populating the 'W' column a bit more in the future.