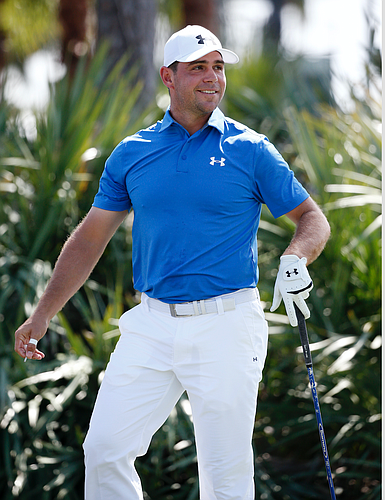 Not even a month after celebrating his 27th birthday, Gary Woodland, one of the world’s longest drivers of the golf ball, was nearing the end of the 2011 calendar year in which he won a PGA tour event, the Transitions in Tampa, Fla., finished in the top 30 in all four of golf’s majors, entered the FedEx playoffs ranked 10th, and had partnered with Matt Kuchar to win the World Cup, a prestigious, non-PGA tour event.

His resume´ and style of play lined up quite similarly to the one Brooks Koepka, 27, took into the U.S. Open he won at Erin Hills.

Injuries, changes in swing instructors, equipment and caddies were factors in Woodland not quite recapturing that magic in subsequent years, although he picked up his second PGA tour victory at the Reno-Tahoe Open in 2013.

Woodland had a strong bounce-back season in 2016, finished 38th on the PGA tour money list and gained exempt status for all four of this season’s majors.

Then the 2017 season, which actually started in Oct., 2016, opened and Woodland quickly caught fire, appearing to be back in full 2011 form, his putter not quite as reliable as back then but his wedge play noticeably better than ever.

He was set to face Rory McIlroy in a second-round match of the World Golf Championships Match Play tournament in late March when the only thing more important to him than his career put golf on hold. He withdrew from the McIlroy match for what he termed personal reasons and soon after revealed that one of he and wife Gabby’s twin babies, a girl, had died and that doctors would monitor closely the health of Gabby and their baby boy for the remainder of Gabby’s pregnancy.

Woodland appeared in just two tournaments (the Masters and Zurich Classic) the next six weeks and missed the cut in both. Since then, he has appeared in three tournaments, making the cut in all three, including the U.S. Open, in which he tied for 50th.

The highlight of Woodland’s golf season arrived Friday when Gabby gave birth to the couple’s first child, son Jaxon Lynn Woodland, at 11:56 p.m. The baby arrived 10 weeks premature and weighed just under three pounds, according to Woodland, who said Jaxon is expected to remain under the care of medical professionals at St. Luke’s for the next two months.

“Friday night was a huge deal, him coming out,” Woodland said at Twin Oaks in Eudora, where he came Monday to say hello to Linda Randall, wife of his late University of Kansas coach Ross Randall at a tournament in his honor. “Now we know he’s in great hands and he’s got great help. He’s monitored all day long. I think that was some of the unknown. My wife’s at home, she’s never been pregnant, is he OK, is he not OK? Now knowing that she’s OK and knowing that he’s in great hands is a huge mental relief for me.

“I’ve actually been able to sleep a little bit, been able to rest, and just feel like I’m a thousand pounds lighter, so hopefully, in a couple of months when he gets home it’ll feel even better, but I feel great and I’m excited to kind of get out and get playing again.”

Woodland was going to playing in the Quicken Loans National in Potomoc, Md., at which Tiger Woods serves as host, this week but withdrew to be with his wife and baby.

“Tiger’s event is a great tournament, but obviously there is no way I could have mentally played this week,” Woodland said. “I would have been there wanting to be here. I’m excited to get back out there ready to go at the Greenbrier (July 6-9 in West Virginia), then I’ll get ready for the British Open (July 20-23).”

Woodland reports that Gabby is doing well and sounded thrilled to be a parent.

"I got to hold him for the first time and you just felt like everything was OK," Woodland said, "and obviously you have a little bigger purpose in life."

This is very heartwarming news. Hopefully, Jaxon will continue to receive the wonderful care he has to date. God bless them all!