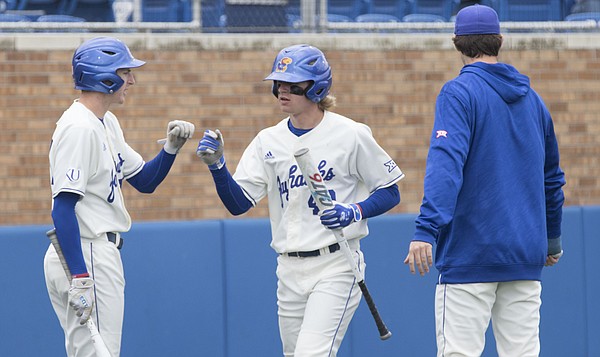 Kansas freshman Rudy Karre, center, is congratulated by teammates as he walks back to the dugout after scoring a first inning run during the Jayhawks' game against West Virginia on Saturday at Hoglund Ballpark by John Young

Sometimes youth is a bona fide excuse for a team falling short of its goal. Sometimes a young roster translates to a bright future. Sometimes it doesn’t because young doesn’t necessarily mean talented.

In the case of a Kansas baseball team that fell shy of NCAA tournament worthiness, the young talent on hand does appear to give the Jayhawks a shot at putting together back-to-back NCAA tournament appearances, starting in 2018.

Unless shortstop Matt McLaughlin is drafted high enough and offered enough money to bypass his senior year, KU will return its entire starting lineup, including all three weekend starting pitchers.

Leadoff man/center fielder Rudy Karre and second baseman James Cosentino make a nice one-two punch at the top of a lineup that could use a power hitter added to the middle of the lineup.

Kansas coach Ritch Price has drawn criticism at times for not recruiting enough players from Kansas, generally having fewer in-state players than the state’s other two Div. I baseball programs.

That argument would hold more water if Kansas State and Wichita State were outperforming KU, but neither program has done so in recent seasons.

In the past four years, Kansas has a 40-54 record in Big 12 play, Kansas State a 31-65 mark. Advantage KU. Over the same period, KU’s average RPI has been 26 spots higher than that of former powerhouse Wichita State . This past season, Kansas finished with an RPI of 61. Kansas State checked in at 95, Wichita State at 146.

The goal is not to be the best team in the state of Kansas, rather to gain an invitation to the NCAA tournament. Kansas has failed in that regard for three consecutive seasons. K-State and Wichita State each have missed the past four tournaments.

Some believe recruiting more Kansas players will put Price on the road to better success, but nobody is calling for the Wildcats or Shockers to take that path. If anything, both schools appear to be expanding their recruiting horizons.

Baseball recruiting isn’t tracked with the same fervor as football and basketball, but there is at least one website that does a nice job of keeping up on it.

The Jayhawks also picked up a power arm with the potential to close games or start them. Blue Valley High graduate Ryan Cyr, a 6-3 right-hander, was dismissed from Mississippi State for a violation of team rules and transferred to Kansas. As a freshman for Mississippi State in 2016, Cyr went 1-1 with a 1.04 ERA in 17-1/3 innings. He made one start and 11 relief appearances.

Kansas has 12 commitments from junior college and high school players. Undersized Eli Davis from Shawnee High in Oklahoma is a left-handed power pitcher and left fielder who plays baseball with an in-your-face style sure to make him a fan favorite at Hoglund Ballpark. As will VanCleave, Davis will be given a shot at pitching and playing in the field.

It's time for Price to go before his grandkids get old enough to take spots on the team.

Four teams with losing records are in the NCAA baseball tournament. One team is 20-32. So apparently having a winning record is not a requirement. KU, K-State and/or Wichita State should have gotten an invite. They are probably just as good or better than some of the teams who were selected.