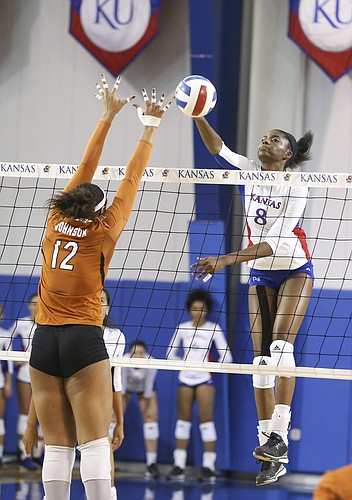 Kansas right side hitter Kelsie Payne (8) gets up for a hit against Texas middle blocker Morgan Johnson (12) during the second set on Saturday, Oct. 29, 2016 at the Horejsi Center. by Nick Krug

The NCAA women’s volleyball Final Four is in Sprint Center, Dec. 14 and 16, so it’s a good year for Kansas to have a roster that has a legitimate shot to make a second run to the sport’s ultimate stage in three years.

A look at key dates on the Horejsi Center schedule:

Sept. 4: Kentucky visits for KU’s home opener. The Wildcats, coming off back-to-back strong recruiting classes, are young but extremley talented and are likely to appear in the preseason top 25.

Sept. 9: Revenge weekend continues with Creighton, the school that bounced KU from the 2016 NCAA tournament in a thrilling match in Horejsi, in for a rematch. Might scalpers holding tickets in the air before this one?

Oct. 11: Texas very well could bring a No. 1 national ranking into this one and will want to pay back Kansas for winning the Big 12 title last season.

Nov. 8: Kansas State visits Horejsi and the rivalry match always brings out the best in the lively crowd.

Dec. 8-9: NCAA Championship Regionals. If Kansas has a strong enough season to merit being one of the host schools for the regionals, Allen Fieldhouse will be availble with basketball games taking place Dec. 6 and 10.

“We have the most competitive home nonconference schedule that we have ever had, paired with challenging lineup of matches away from home,” KU volleyball coach Ray Bechard said. “That jumps out at me initially - the opportunity we have to entertain some really good teams and to make a large footprint on the national stage.”

Tom, have you ever heard rumblings of an expansion of Horesji? I'm just curious, with all the money KU seems to be pouring into various sports and facilities.

I know the small seating capacity is advantageous for the team, but they could increase that by a thousand and still sell out every match. Horesji is a glorified high school gymnasium.

They do have plans for expansion that will bring Horejsi up to 3,000 capacity, which is the minimum required to be host of an NCAA regional. As soon as the money, an estimated $10 million, is raised and it goes through the necessary red tape (approval of Regents, etc.) they'll move forward. I would not be surprised to see it built in time for the 2018 volleyball season.

It's great to hear the expansion is prepped and also good to know that Allen is available this year. It would be really cool to see a Phog filled regional. Do the expansion plans include any option for additional expansion? 3,000 still doesn't seem like a lot.