Anderson, Soucie, Wait will be missed 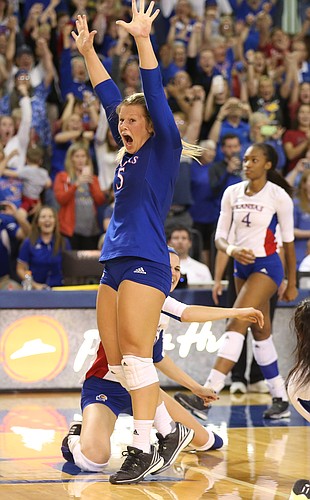 Kansas libero Cassie Wait (5) reacts after the Jayhawks beat the Longhorns in five sets on Saturday, Oct. 29, 2016 at the Horejsi Center. by Nick Krug

Kansas volleyball has what could be remembered as the school’s most talented and accomplished senior class in school history this coming season, but that doesn’t mean the Jayhawks won’t miss last year’s senior class.

Libero Cassie Wait and middle blocker Tayler Soucie were All-Big 12 players and reserve Maggie Anderson was known as one of the team’s better servers.

“We lost three big-time culture kids who were unbelievable teammates,” KU coach Ray Bechard said. “Maggie didn’t play as much, but she was big-time in the gym and the locker room, as were Cassie and Tayler.”

Winning programs have a way of sustaining themselves in part through winning traits being passed down from older to younger players, traits such as those that made Anderson, Soucie and Wait — recently nominated by the Kansas athletic department for the NCAA Woman of the Year award — “unbelievable teammates.”

Anderson, Soucie and Wait experienced a pair of firsts in KU volleyball history, making it to the Final Four in Omaha in 2015 and winning the Big 12 title in 2016.