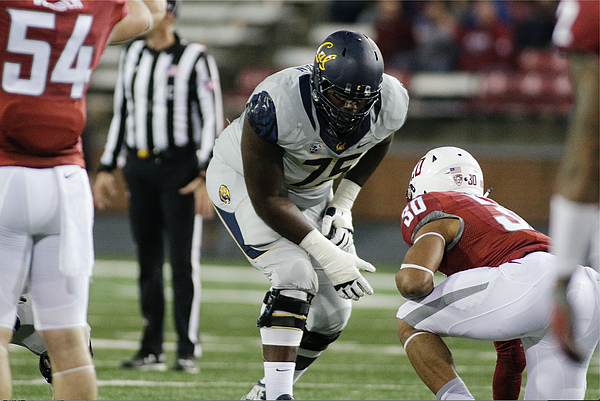 California left tackle Aaron Cochran plans to graduate in May and play final season for another school. Photo by Associated Press. by Tom Keegan

One of the biggest remaining college football recruits, both in terms of size and potential 2017 impact, announced last week that he intends to graduate from California in May and transfer to another school for his final year of eligibility.

Aaron Cochran, a 6-foot-8, 350-pound left tackle who started 16 games in the past two seasons for the Golden Bears, will make some school's offensive line bigger, more experienced and better.

A native of Atwater, Calif., Cochran reportedly was considering declaring for the NFL Draft, but instead opted to play one more year of college football. If Cochran has decided where he wants to play his final season, he hasn't announced as much, but the way things have picked up for Kansas lately on the recruiting front, it's not a reach to think Kansas could make a strong pitch.

There is a link in the KU program to Cochran. His first offensive line coach at Cal was Zach Yenser, who left Sonny Dykes to become a part of David Beaty's first KU staff. Dykes was fired after this season and replaced by Justin Wilcox. Cochran reportedly was close with Dykes' offensive line coach, Brandon Jones, who recently was hired by Texas Tech head coach Kliff Kingsbury to become the Red Raiders' O-line coach at his alma mater.

Oklahoma State also has a connection that could come in handy in its pursuit of Cochran. Cowboys running backs coach Marcus Arroyo reportedly knows the Cochran family from recruiting his older brother, Matt Cochran, to Cal and was the Golden Bears' quarterbacks coach when Aaron signed.

Even without landing Cochran, Kansas has a legitimate shot to field the most improved offense in the nation with key additions at running back (Dominic Williams and Octavius Matthews), quarterback (Peyton Bender), wide receiver (Daylon Charlot) and right tackle (Charles Baldwin).

Landing Cochran would enable Kansas to move Hakeem Adeniji inside for a season, playing guard next to returning starting center Mesa Ribordy, with Jayson Rhodes, Larry Hughes and others competing for the other guard spot.

Cochran has one remaining year of eligibility and according to at least one report shapes up as a good fit for a Michigan need.

Go get him! Enjoy following our recruiting this year.

Not really sure Adeniji projects to a guard, unless he's put on quite a bit of bulk. He's a fine tackle--long, wide, athletic, all that stuff. Guard is about getting low and moving people out of the way. He'd give up 30 pounds or more to just about any interior lineman he bumps heads with.

But you don't worry about that kind of thing when you get a chance to add an NFL-caliber left tackle. You make it work.

Adeniji has gotten a lot bigger since the season ended. He was interviewed on Signing day and I believe he said he was 20lbs heavier. He will continue to grow and add strength throughout the spring and summer as well.

He's at 290 lbs now. With Baldwin at RT and Adeniji at LT where would we use Cochran? He'd have to play his way onto the OL.

Are you kidding? This guy's an NFL prospect. He'd play LT. Adeniji can play guard for a year and move to tackle for final two seasons.

This may be one of the better responses of all time. :-)

Talk to Adeniji the other day. He's at 295 and wants to play this season at 300. That's plenty big. And he can move back to tackle for junior and senior seasons.

I believe he played inside in HS, so it's not a complete unknown even if it is at a different level.

The best part is that it really just creates depth, which is absolutely crucial to be competitive. The 1's will not play all game, so the key to not being exploited is to quality backups when the 1's need rest or replacement due to injury or otherwise.

Normally I'd not even get my hopes up for landing a guy like this but....these past couple days make me believe anything could happen! Rock Chalk!

He is also considering OSU.

Thanks, Jack. Normally, I'd say no shot for Kansas but when you look at the schools KU beat out to get commitments from the six Louisiana prospects, that thinking no longer applies. I know verbals are non-binding, but just the fact that Kansas is getting commitments when other heavyweights is significant. Plus, the timing for a graduate-transfer O-linemen twins up perfectly. He would be the final piece on what very well could be the nations most improved offense.

Tony was the link to the Boot Boyz, and Zach would be the link to Aaron. While a huge addition, grad transfers seem to head to where they can be final piece of championship campaigns.

Mr. Cochran belongs at Kansas, in a state known for its prime beef steaks fresh off the ranch, not to mention Jambalaya!

Introduce him to Mr. Tarik Black, a cool dude who brought new meaning to One-And-Done, who isn't done yet. Once a Jayhawk, always a Jayhawk!!!!

Any word on how OL Cam Durley is matriculating towards playing time? He hasn't been in on a snap in two years. I hope he's hungry too!

edit: Pardon me......I believe he did make it in for some snaps in one of our games this past season.

Actually, Durley at first was going to be part of the Class of 2015, but that didn't happen and he actually became part of Class of 2016, so he's only been here one year. They like his potential but he still needs at least one more year of catching up in weight room before you see him playing a lot of snaps. Antoine Frazier, with more year in the weight room, is another one to look at in 2018. Great feet. Malik Clark, sophomore from Louisiana, could work his way onto depth chart in 2017. The numbers are there for the O-line. They're landing better prospects. It just takes time. Cochran would be the absolute perfect one-year fit. Haven't felt this good about direction of Kansas football program since Mangino and Reesing left town.

Color me disinterested. Why would Adeniji benefit from playing guard for a year instead of con continuing to play the position he is suited to?

Because he would be playing next to a future pro.

Because it makes his team more likely to win.

Because he would develop his versatility which is a tremendous benefit in moving forward.

Because he would have a year of not playing the most difficult position on the OL to continue growing into a full sized D1 OL.

That's 4 off the top of my head. There are lots of benefits for Hakeem.