Frank Duncan a strong spring away from big-leauge roster spot 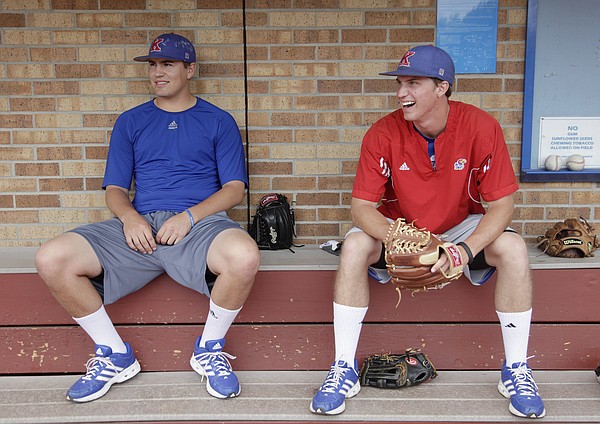 Senior pitchers Frank Duncan, left, and Jordan Piché relax before practice shortly after the Jayhawks found out they made it into the NCAA Tournament and will play University of Kentucky in Louisville, Kentucky, on Friday, May 30, 2014. by Mike Yoder

This could be a big spring for former University of Kansas right-hander Frank Duncan, traded last week from the Pittsburgh Pirates to the Arizona Diamondbacks for infielder Phil Gosselin, who has spent parts of five seasons in the big leagues.

Duncan, 25, is not on Arizona’s 40-man roster, but was invited to the big-league camp, where he’ll have a chance to show his stuff against major-league hitters while the Diamondbacks evaluate him for a potential bullpen spot.

Duncan has progressed rapidly through the minors since the Pirates chose him in the 13th round of the 2014 draft.

His spent his first season in short-season Class A ball in the fabled NY-Penn League, pitched in advanced A ball in 2015 and after starting last season in Double A quickly earned a promotion to Triple A, where in two stints with the Indianapolis Indians he went 9-6 with a 2.33 ERA in 20 starts and pitched for the International League in the Triple-A All-Star Game.

“He’s got a chance to make the roster this spring,” Kansas coach Ritch Price said. “We’re really excited for him.”

Duncan is slated for a spot in the Triple-A Reno Aces rotation, but with an impressive spring could eke out a long-relief spot on the Diamondbacks’ roster.

Price said that the Pirates made adjustments to Duncan’s delivery, including changing his arm slot, with the goal of him inducing more ground balls.

MLBpipline.com ranks the 6-foot-4, 215-pound Duncan, a native of San Francisco, as the Diamondbacks 22nd-best prospect.

Great for Frank! But how many Dback prospects are there? How is he ranked among pitching prospects with the club?

Good article Tom, but you wouldn't have passed in the William Allen White School of Journalism. But then again, big-leauge writers are few and far between. :-)