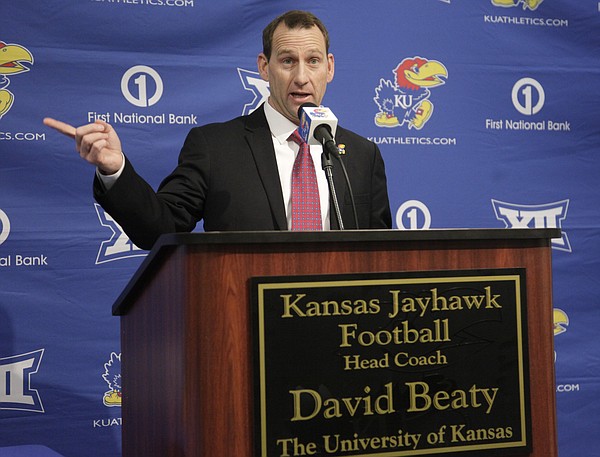 Twelve days removed from college football’s first December signing period, Kansas ranks next-to-last in the Big 12 with 12 verbal commitments. Only Kansas State, which never does as well in recruiting on paper as on the football field, has fewer (11) verbals.

Eight of KU’s 12 commitments are high school players and four are prospects from junior colleges.

KU head coach David Beaty shared his thoughts during Big 12 Media Days in July on the addition of the early signing period.

“One of the most interesting things for me is when kids are committed and that first period comes around how many of them actually sign and how many don’t, because if they don’t sign then, they’re not committed,” Beaty said.

Tough to argue that point, so it's now or never for KU's most celebrated recruits.

Kansas lost another commitment Wednesday when three-star defensive end Josh Smith of Landry-Walker High in New Orleans, announcement on Twitter that he will “explore other options.”

KU has four remaining commitments who have been pursued by big programs and will be recruited aggressively by schools trying to pry them from their Kansas commitments before early signing day.

Harris announced on Twitter he would choose between Kansas and Mississippi State. Jason tweeted that former Mississippi State head coach Dan Mullens’ still is recruiting him at his new job at Florida. This might mean nothing, but it’s somewhat interesting that Harris just started following new Tennessee head coach Jeremy Pruitt on Twitter.

LSU, Mississippi State, TCU and UCLA have offered Williams at various stages of his recruitment, per Rivals.

These are nervous times for college football coaches. The early signing period cranks up the pressure because the guess by most is that the majority of prospects will sign now, rather than wait until February.

Well... this is embarrassing... https://www.cbssports.com/college-football/news/the-bottom-25-college-football-rankings-playoff-determines-nations-worst-team/

If this class does fall apart, the most frustrating issue will be the clamor on this site by people who have, in error, constantly stated that a coaching change would harm recruiting. In fact, it would have helped. Had you hired Willie Fritz, or Jim Leavitt or Craig Bohl, they would have had a far, far greater chance of keeping these kids committed than Mr. 3-33.

And the far-reaching consequences of the shortsightedness shown by Girod is this: this recruiting class is your senior class in 4 years. And Bill Snyder isn't walking through the door to come turn them into winners (apologies to Rick Pitino for stealing his line).

The sheer idiocy of keeping one of the 10 worst coaches in the country is exceeded only by the arrogance the administration showed when they said that the people with the money somehow miraculously know how to build a football program. If that's true, where have they been the last eight years?

This team will be bad next year because the vast majority of the experienced players simply aren't as good as the guys on the other sideline. An actual, proven, quality coach would absolutely coax more out of this roster, but we'll get more of the same next year.

These high-ranked kids should absolutely sign somewhere else. Beaty can't teach them how to play, he can't teach them how to win and he can't move them forward to bigger things. All three of these Louisiana kids would be better off going to Tulane, playing for a real coach, becoming hometown heroes and elevating a program that actually is serious about the sport.

While I want KU to succeed, I don't want to see us ruin a kids college career because we have a snake-oil salesman as our head coach. He talks the talk. He absolutely can't walk the walk.

If Signing Day goes South, Girod will have been given yet another mulligan. There's still time, Chancellor, to save this program from itself.

I HAVEN'T EVEN READ THE ARTICLE YET BUT I WANT TO SAY I LOVE THIS TOM KEEGAN. THANKS.

Yes we need better players but the problem is getting them to sign is difficult. Probably will remain that way until KU has better success. We hear from those that criticize our program wouldn't hurt if some speak out about positive factors. I'm thinking Beaty will work hard to get better players and coach them to success. (I hope)

Literally stood by Beaty at the meat counter at Dillon's two years ago and listened to him complain about how much work the job was to some patron. True story. The guy literally has zero chance of succeeding as our coach. He's been paid millions, no need to feel sorry for him.

You're a liar! You bum. Defaming a good man to pump up your ego. Kick rocks.

The truth hurts. I just shook my head because I had also heard the "condolences" comment at the press conference and the Joan of Arc act from Weis. I knew then we had a loser but tried my best to stay positive. Don't believe it? Look up the old comments. I tried to support this guy for the longest time but knew, deep in my heart, from the get-go, that it was a mistake. And just so you know, there is no defamation when repeating the truth.

Brett, you and Tom Keegan need to marry each other. Then you guys can sit in your trailer in North Lawrence drinking beer, smoking weed and trashing Zenger and Beaty until the cows come home. UTEP just hired Dimel as HC. If UTEP wins a bunch of games next year and KU doesn't, then maybe you and Keegan will have proved your point. If KU starts winning, then those of us who kept the faith will be rewarded.

There are several issues with this scenario. First, I'd have to divorce my wife - and that could be really expensive. Second, Tom loves golf and I just have a hard time respecting someone who loves golf. Third, I don't want to move my trailer from it's current park because I got a good deal by agreeing to pay two months lot rent in advance.

Now, back to football, you understand that you just compared us to UTEP? That's the bar? Is it irony that El Paso is literally on the extreme southern border of the U.S.? It's as low as you can go...

As long as we have people willing to accept incompetence on a massive scale, then we'll keep getting what we are expecting. It's hard to imagine anyone wasting a single keystroke defending Zenger or Beaty. And that includes the Major Milktoast's statement of endorsement.

As another sign of the Zenger incompetence, remember that massive pay raise he gave to Hull? Back when we had a top-ten recruiting class? Add over-reaction to the list of fireable offenses.

I actually, truly, literally question whether you could pull two names out of a hat, put them in charge of KU football, and have a worse result. Why do people waste time making excuses for this level of incompetence?

Jesus Brett, please Shut up. We know you love to hear yourself talk but for goodness sakes just stop. They aren't going to fire Beaty, Zenger or Girod for the next year so give it a rest. You are literally rooted for Kansas to fail in recruiting so you can prove a point. You're a disgrace to KU Fans. Go cheer for Kstate you bum.

Jack , don't you realize your just feeding into this idiot? - This is what he thrives on, he is just like a bad dream he never goes away. - Heard he tried going to be a bandwagon K-State fan only problem is - - Daddy Bill wouldn't take him - so now he is a homeless soul - -feels miserable and just wants so badly to be acknowledged. - -Just leave him a little treat on your step and maybe he will waddle off into the sunset roflmao - -I understand where your coming from Jack - but it's best not to try and feed into his game. - -ROCK CHALK ALL DAY LONG BABY

My name's not Jesus, but Peace be With You Jay.

Actually I would say allowing mediocracy would be disgracing KU fans.

Holding people accountable for success and failure is key.

unfortunately for ku football ONLY tom & brett are in touch w reality. i do agree w the names out of a hat, as ridiculous as that is, its Almost true.

but, for god’s sake, does noone else notice the one thing wrong in that picture?! (besides a football coach who Cant Win) WE ARE NOT THE KANSAS (singular) JAYHAWK! we r the GD JAYHAWKS!! plural. the only thing that could make that picture worse is to get the gd JAYHAWKS facing different directions on the Same Wall like they do on different hats & shirts!! DOES NOONE ELSE NOTICE THIS?! the only other team in ghe history of sports to have as bad a mktg dept as ku is the AZ Cardinals who do the same thing & look foolish as he!!. honestly, can we do nothing right anymore? tell me im crazy, but Come On!