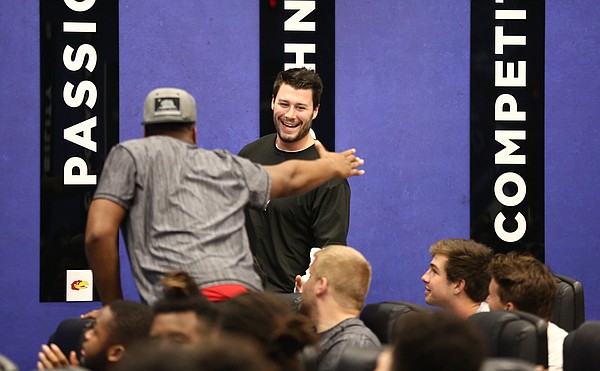 Kansas tight end Ben Johnson is congratulated after being selected during a spring game player draft on Wednesday, April 12, 2017 at the Anderson Family Football Complex. by Nick Krug

Nobody ever called first-year Kansas offensive coordinator Doug Meacham a low-energy personality. He's always up, forever looking for the next task to tackle. He's unconventional in many ways — he rides a Vespa to work from his downtown residence — but he has a lot in common with many football coaches in that he clearly loves his job.

To drive Meacham to a new level of enthusiasm merely mention two words, one name: Ben Johnson. Not the Canadian sprinter, the Kansas senior tight end.

"Ben Johnson's a really good player, man," Meacham said. "I had a kid at Oklahoma State named Brandon Pettigrew, who was a first-rounder. I’m not saying Ben’s a first-rounder, but Ben is kind of what those guys (NFL scouts) look for, I think."

Pettigrew played seven seasons for the Detroit Lions. The way Meacham sees it, Johnson's versatility will be his ticket to a spot on an NFL roster.

"He can do all the special teams," Meacham said. "He can set the edge, block, and he’s a really athletic, route-running guy; great set of hands and ball skills."

For now, Meacham is excited about how Johnson can be used in his final season at Kansas.

"I don’t think you could design a better guy for what we do because he plays fullback, he plays tight end and he plays receiver," Meacham said. "Man, he’s just so versatile, and all the special-teams stuff, so he’s going to get a lot of plays. I’m really excited about him. He makes you want to play that position, have that in the game plan, because he’s such a good player.”

Get him the nugget!

They totally made him invisible last year. Glad to see there are plans to get him back involved.

He wasn't the OC at OK-State. His TE usage so far in his career is almost identical to Beaty's TE usage, which is less than 10 TE receptions a year. My estimate is Ben Johnson will go 15 for 150 in a disappointing SR year.

Meacham doesn't say that he's going to throw lots of passes to him. He says that he will get in on a lot of plays because of all the things he does besides catch passes, including FB & special teams. Generally not catching passes from those spots, which you seem to think is the metric for usage.

Odds that we run a fake and pass to him for a long first down?

I've always thought Ben has been under-utilized. He is huge, athletic, and a play maker. They have got to get him more involved. Put him in the slot a la Kerry Meier. I think we'll see lots of production from him.