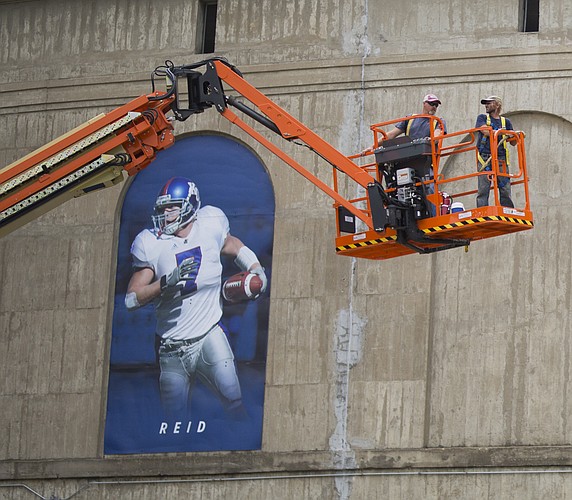 Workers in a cherry picker come down next to a banner of former Kansas linebacker Nick Reid, while doing some exterior work on Memorial Stadium, Monday, Aug. 7, 2017. by Nick Krug

A sharp new feature of the outside wall of the north end of Memorial Stadium almost is been completed. The wall is decorated with banners made from action photos of a dozen Kansas football greats.

As of Monday afternoon, only the Reesing banner had not gone up on the wall.

Hard to believe that the Orange Bowl season was 10 years ago this year.

I'd have hated to be the one to choose who gets put on the wall and who doesn't.

I would like to recognize a few other Hawks from the Mangino era: James McClinton, Joe Mortensen, Jon Cornish.

There were guys who maybe didn't rewrite the record books, but their hard work was crucial to putting KU football back on the map. Cornish had a heck of a year in 2006 and KU sadly was spurned by the bowls. McClinton was a force up front in 2007 and demanded double teams. He didn't rewrite the record books, but he anchored some of the best defenses in KU history. Joe Mortensen was a beast of a man and tougher than nails. He, Mike Rivera, and James Holt formed one of the most underrated linebacker units ever, the year after losing Big XII DPOY Nick Reed.

James McClinton...most underrated player in KU football history. Go back and watch the tape of that guy. Unstoppable.

Great point, Marcus. He was phenomenal, a defensive version of what Reesing was for the offense.

Saw some pictures of them as they were being placed last week. The only problem is they are so sparse against the outer wall of the bowl you barely notice them. They need to add the KU logo and the Jayhawk logo to the arches in between each action photo to draw your attention to them more.

A good idea, like many KU Athletics ideas, but lacking in execution. Kinda looks like an afterthought. Reminds me of this summer's rally event in KC. No working microphone makes for a poor buzz creator.