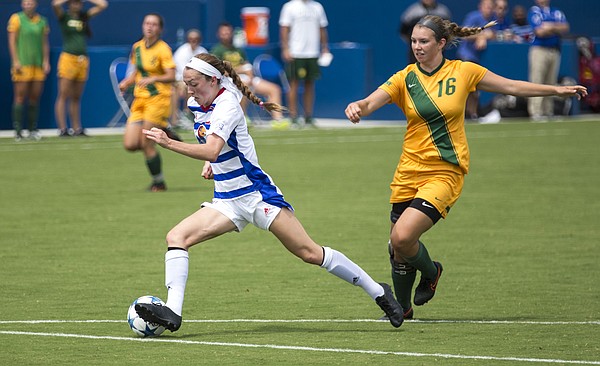 Kansas freshman midfielder Grace Hagan makes a move in the open field to shake North Dakota State junior midfielder Natalie Fenske (16) during their exhibition soccer match Sunday at Rock Chalk Park. The Jayhawks and the Bison played to a 2-2 tie. The Jayhawks start the season on the road with four straight away games beginning in Lincoln, Neb. against Nebraska on Friday, Aug. 21. Kansas then returns to Rock Chalk Park to host Santa Clara in its home opener on Friday, Sept. 4, at 5 p.m. by John Young

My initial reaction when informed that women’s athletics at the University of Kansas turn 50 this school year was, “Only 50?”

Marlene Mawson started the women’s program with an annual budget of $2,000 to cover equipment and travel, according to a release put out by the athletic department.

KU has no shortage of superstar athletes to call attention to the anniversary this fall.

No Kansas player made the 11-deep preseason All-Big 12 team, which included a record six players from West Virginia.

KU opens its soccer season Friday night against Nebraska at Rock Chalk Park, first touch 7 p.m. The KU players will wear during pregame warmup a commemorative T-shirt to honor 50 years of women’s sports. All KU female athletes will wear the T-shirts during warmups this season.