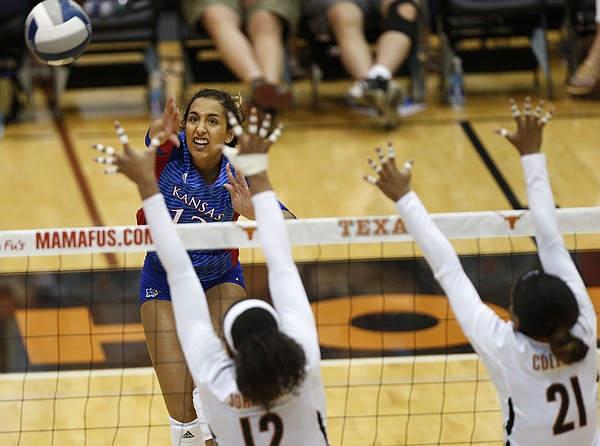 Kansas' Patricia Montero (13) hits a kill past Texas' Morgan Johnson (12) and Chloe Collins (21) during a match at Gregory Gym in Austin, Saturday, Sept. 24, 2016. by Stephen Spillman/Special to the Journal-World

The Kansas volleyball team, ranked eighth in the nation in the preseason poll, coming off its first conference title in school history and armed with key seniors who as sophomores played in the Final Four, caught a tough break this week.

Sophomore outside hitter Patricia Montero from Ponce, Puerto Rico, suffered an ACL injury and will be lost for the season, coach Ray Bechard revealed Wednesday. Bechard said the versatile Montero had been performing as well as anyone on the roster during preseason practices. Montero was one of five players who played in all 30 matches for the Jayhawks last season and started in half of them.

“She’s somebody who can do a little bit of everything,” Bechard said. “She has a nice jump serve, she plays the back row well, she could attack, passes well, blocks well. She’s a six-rotation player and those are very difficult to find in volleyball.”

Despite the loss of Montero, the Jayhawks, led by All-Americans Kelsie Payne and Ainise Havili, will remain a fashionable pick to reach the Final Four, which will be in Sprint Center in Kansas City this Dec. 14-16.

"There are 25 teams in the country who think they can get there," Bechard said. "Now we have to (focus on) 'What is it about us that we can do on a daily basis to be one of the teams that gets there?'"