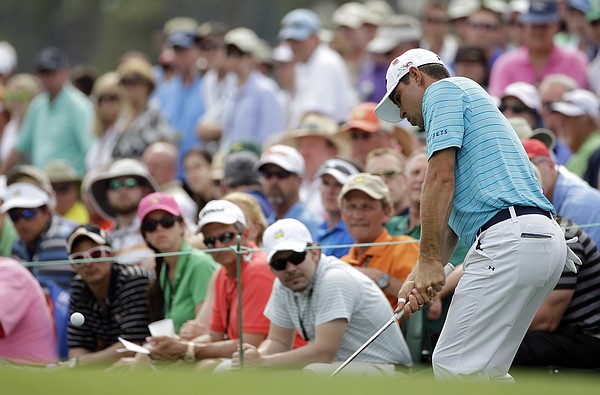 Gary Woodland chips to the 18th hole during the second round of the Masters golf tournament Friday, April 10, 2015, in Augusta, Ga. (AP Photo/Matt Slocum) by Matt Slocum

Woodland, 32, is playing in his fifth Masters and first since 2015, when for the only time at Augusta he missed the cut. He did not qualify for the tournament last year.

Woodland will play with Tommy Fleetwood of England and J.B. Holmes.

Woodland is competing for the first time since withdrawing from a scheduled match with Rory McIroy two weeks ago to be with wife Gabby, who 18 weeks into her pregnancy with twins, a boy and a girl, had lost the girl.

Woodland revealed the news the following week on Twitter with a message that in part said, “We appreciate all of the love and support during this difficult time as we regroup as a family.”

There no doubt will be plenty of it for Woodland at the Masters this week. The heart icon on that tweet has been clicked more than 2,000 times.

Woodland told ESPN.com this week that Gabby convinced him to play in the Masters.

“It’s probably the first time in my life where I’ve had something thrown in my face and sports weren’t the top thing,” Woodland said.

Augusta is a relentless test of a golfer’s concentration abilities under the best of circumstances and Woodland has stood up pretty well to the challenge in the past.

He finished tied for 24th in his first Masters in 2011, and the following year was four strokes off the lead through the first two rounds before his wrist blew up and his score went with it. Woodland withdrew after shooting a third-round 85. In 2014, Woodland finished in a tie for 26th.

He shares the record for the lowest front-nine score of 30, which he recorded in 2014, on his way to matching his Augusta-best with a 69. He shares that record with Johnny Miller, Greg Norman, K.J. Choi and Phil Mickelson.

Woodland’s best back nine, a 31, came when he shot a 69 in 2011. At the time, he sent part of the credit for the 31 to having played those nine holes with Tom Watson in a practice round the previous day.

If Woodland were to pair his record front nine with his best back side, he would set the record for the low round. Nick Price (1986) and Norman (1996) share that record, both carding a 63.

Woodland had been with Norman’s former caddie, but switched this year to Brennan Little, who was on Mike Wier’s bag in 2003 when he won the Masters.

Woodland is back working with Butch Harmon for the second time in is career and his short game has responded well to the world-famous instructor's tutelage. Woodland’s most striking improvement this season has come out of green-side bunkers. He ranks fifth on the tour in sand-save percentage (69.57). His highest previous rank was 105th, last season (48.85). Woodland’s career sand-save percentages (rank):

I like the coverage of Gary Woodland, and wish him well.

Also, I am using this space to complain about the constant bombardment of Internet sites that, somehow, attach themselves to your webpage in effort to reach your readers. To illustrate, when I opened this article I was first greeted by the message "21 messages being blocked."

I am a daily reader, and have been for years. This internet assault started just a few weeks ago. But it now happens every time I open kusports.com. I do not have this problem with any other site.

I do hope you will take this message seriously and look into the problem. It is not only annoying, but slows my system down, and occasionally, actually opens sites on another page in my browser (set to block junk sites). I repeat, your's is the only site where this is happening to me.

Thanks for what you can do.