The worse the conditions the better for KU's gritty golfers 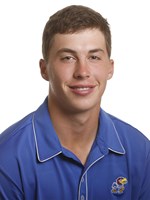 Many who never took up golf cling to the false notion that it takes no toughness to play it. Some even maintain it’s not a sport because it doesn’t feature contact with other humans.

Anyone who thinks that should watch the best Kansas golf team since 2000 compete. These guys aren’t just golfers, they’re grinders. If they had their druthers, they would play the NCAA regionals in Siberia. Unfortunately, there isn’t a regional there so they’ll prepare to go where the NCAA sends them when the field is announced next Thursday.

Wind and cold made Prairie Dunes, a tough golf course under the best of conditions, a severe test of mental toughness during the Big 12 Championships played Monday through Wednesday in Hutchinson.

Kansas coach Jamie Bermel loved hearing what senior Chase Hanna, who by the way would not be intimidated by putting on Siberian ice, said as he walked off the course after the third round on his way to dinner: “I hope it’s blowing 40 tomorrow.” Half of Hanna’s wish was granted. Winds reached 20 mph and the senior from Shawnee Mission East High birdied four of five holes from 13 through 17 to become the school’s first conference champion since 1995.

Slade Adams, who died last October, was Big Eight tri-champion in 1995. Adams made the cut at the 1997 U.S. Open at Congressional. Matt Gogel, retired from the PGA tour, on which he won an event and now is an announcer, won the outright Big Eight title in 1991.

Hanna has an impressive trophy case. He won three Sunflower League titles, the Kansas Junior Amateur and the Missouri Junior Amateur. He became the first amateur to win the Tom Watson Challenge, defeating Watson in the summer of 2015, and won the prestigious Kansas Amateur.

“I’d put this at the top,” Hanna said, “because I was competing for Kansas.” Spoken like a true third-generation Jayhawk.

“These guys are all used to playing in the wind and cold,” Bermel said. “Those were good conditions for us.”