Svi and Vick keys to moving on without Udoka Azubuike 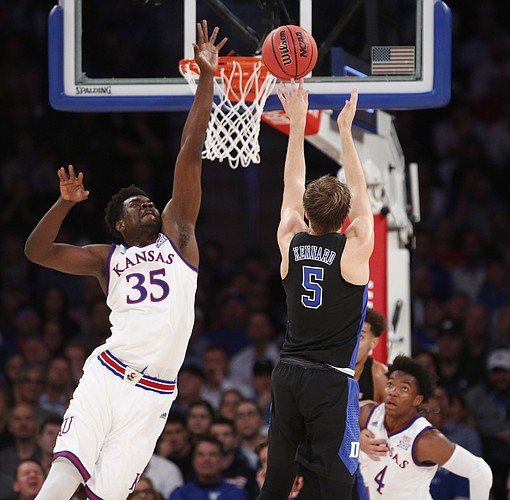 Kansas center Udoka Azubuike (35) defends against a shot from Duke guard Luke Kennard (5) during the first half of the Champions Classic on Tuesday, Nov. 15, 2016 at Madison Square Garden in New York. by Nick Krug

The easy answer has Landen Lucas staying out of foul trouble, Carlton Bragg playing a more physical brand of basketball, Dwight Coleby and/or Mitch Lightfoot stepping up their contributions.

The truth is there are no easy answers as to how Kansas can go forward without missing the presence of raw, talented, really big freshman Udoka Azubuike. Losing the likable, easy-to-please 7-footer for the season is a tough break.

Coleby’s knee, still not at full strength after ACL surgery that prevented from practicing with the team during his red-shirt season after transferring from Mississippi State, won’t suddenly return to full strength because Azubuike’s out for the season.

Lightfoot won’t pack on 20 pounds overnight and gain two years of experience because he might play more now that the team’s lone 7-footer is gone.

Losing Azubuike, who figured to steadily improve throughout the season, makes it tougher to earn a 13th-consecutive Big 12 title, tougher to make it to the Final Four, tougher to win the national title.

Even so, KU remains the favorite to win the Big 12, the Midwest Regional still will be played in Sprint Center and Frank Mason, Devonte Graham and Josh Jackson remain the nation’s best one-two-three punch, brimming with so much talent and passion that they are capable of carrying the Jayhawks all the way up the ladder under the net in Phoenix.

Even before Azubuike’s season-ending wrist injury, Self was resigned to using a four-guard lineup up to 30 minutes a game.

Given that, the truth is that the two players who hold the biggest keys to compensating for the loss of Azubuike just might be Sviatoslav Mykhailiuk and Lagerald Vick. They have higher ceilings than anybody, other than the three perimeter starters. The better Svi and Vick play, the faster KU can play, forcing teams to react to their smaller lineup.

Losing Azubuike, who led the team in blocked shots despite ranking eighth in minutes, also could lead to coach Bill Self more frequently turning to tactics he typically employs in very small doses.

It’s possible Kansas could play more zone here and there to keep Lucas and Bragg out of foul trouble.

At other times, the Jayhawks might apply more defensive pressure to increase turnovers, especially against teams armed with talented inside scorers.

That approach has its limitations as well, considering that for all but the 10 minutes or so that two bigs are on the floor, five players will be filling four positions. Graham and Mason can’t be expected to play 35 minutes and constantly pressure the ball. Again, that enhances the importance of Svi and Vick playing at a high level so that Self will feel comfortable resting Mason and Graham, although never at the same time.

Azubuike gave Kansas 12 rebounds in 15 minutes vs. Duke and had the ability to reach wayward lobs and flush them with authority. He could compensate for being out of position defensively by using his long arms to block a shot.

Kansas doesn’t have an answer for specific strengths Azubuike brought to the team, but there are ways to become a nearly as good but different type of team, provided Svi and Vick lock in and load up with intensity.

Mason, Graham, Jackson, Svi, Bragg and Lucas are the main show from here on. Vick is in the next group with Coleby and Lightfoot. Just nine. Gonna be interesting.

Coleby’s knee, still not at full strength after ACL surgery that prevented from practicing with the team during his red-shirt season after transferring from Mississippi State, won’t suddenly return to full strength because Azubuike’s out for the season -- Keegan

Coach Self has stated that Coleby's knee is completely healed...and he transferred from Ole Miss not Miss. State.

I think healed and full strength can be different things. I am thinking Coleby and Lucas can be good enough on defense by crunch time. We can count on Frank, Josh, DeVonte and Svi for 60 points night in and night out. If Josh gets AA scoring going then 65 is attainable. Carlton and Vick can drop 20 then we are at 80-85. Thin margin against the likes of Baylor, ISU, OSU, KSU and WVU.

Like they say you dance with the one that brung ya. Well in basketball you play with the ones available. That might mean some changes. It also might mean be an advantage with some changes. How can you say a 6'8" guy is a small. How about this team. Jackson center Svi and Vick at the forward posts and Mason and Graham guards. Need a sub how about Bragg. Seems like only Lightfoot and Coleby are scholarship left. Unless someone suddenly shows up 2nd semester those non scholie guys might get more than a few minutes. Yes you might have to prevent fouling and even play that crappy zone. Leave the center open and encourage driving to the goal. Hey worth a try.

Svi, Is becoming the player we all thought he would be. He is turning it on.