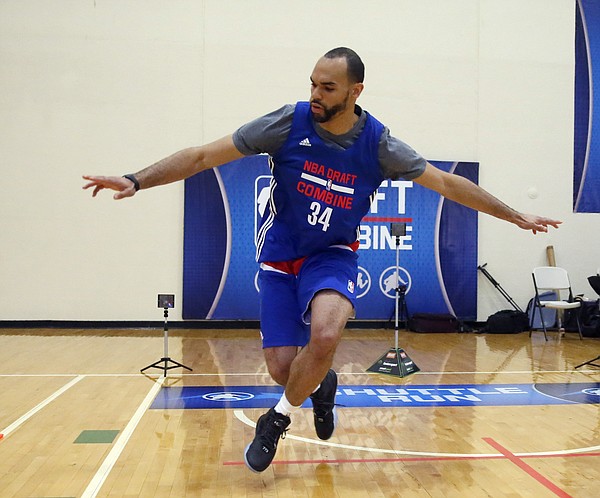 The only thing more predictable than Perry Ellis getting off to a slow start in the NBA Development League was him coming out of with strong performances.

That's how it generally goes with Ellis, a perfectionist whose confidence tends to arrive later than his intelligence. Ellis needs to figure things out, get them down pat, before he feels comfortable doing them and develops confidence that allows his aggressiveness to bubble to the surface.

Fifteen games into his professional basketball career, Ellis averages 8.5 points and 4.3 rebounds and 20.2 minutes for the Greensboro Swarm. Listed at 6-foot-7 and 218 pounds, Ellis totaled 37 points in 47 minutes in his past two games combined.

Playing in the D League must have come as a shock to Ellis' system because ballhogs rule the league and Kansas puts a premium on unselfish play. At Kansas, playing unselfishly for Ellis meant putting up a lot of shots because he was the team's top scorer in his final two seasons. He constantly was urged to play more aggressively.

Statistics don’t necessarily mean much, but the ones that pop off the page can make for interesting discussion.

Some noteworthy ones compiled by Kansas basketball players 11 games into the season: Frank Mason, at 5-foot-11 three inches shorter than the next-shortest scholarship teammate, Devonte’ Graham, is tied (with Josh Jackson) for the team lead in defensive rebounds with 43.

Udoka Azubuike is eighth on the team with 142 minutes and first with 18 blocked shots. Graham has 50 assists and 17 turnovers. Azubuike has two assists and 15 turnovers.

No need to pack heated benches

Noted conspiracy theorist Tim Fitzgerald of gopowercat.com, my co-host on The Drive (Sunday nights at 10:30 on WIBW-TV), finds it a little suspicious that the Texas schools play each other in the final week of the 2017 regular season. He wonders if the motive behind that is keeping them out of the cold. For what it's worth, when Fitzgerald voiced his suspicion Buffalo Springfield’s “For What It’s Worth,” written by Steven Stills, started playing in my head and hasn’t stopped since.

It could be the line, “Paranoia strikes deep, into your life it will creep.”

Neil Young, by the way, wasn’t allowed to sing many of the songs he wrote because some behind-the-scenes genius thought his voice was too different. Different, what a horrible thing for an artist in any field to be, right?

The Kansas-Kansas State game won't be played on the final week of the regular season, rather on Oct. 28 in Memorial Stadium.

The term "manager" should not exist in music or any other art form. "Show booker," yes, but "manager," no.

thanks Tom...now I'm going to have that song in my head during my entire round of golf this afternoon.

That's not a spike mark in the path of your putt. It's just paranoia, striking deep, into your life it's already creeping.

Yeah, what's up with the K-State / KU game being removed from the last week of the regular season.

And, playing Oklahoma and Oklahoma State the last 2 weeks of the regular season. While, K-State finishes up against Oklahoma State and Iowa State. I find this interesting.

Oh well, play them as they're scheduled.

I can't swear to it, but I believe the changes to the schedule have to do with what we saw this year and the Conference's attempt to avoid it when the Championship game is added. If you'll recall, OU and OSU played for a defacto championship, but if it had been the following year with the same stakes, then we'd have seen them play their regular season game, followed by the championship game the next week. All the regular season would have decided is which team was the home team.

Could Stills be more of ham? It's like watching Charles Grodin act. There was a lot of talent in B.S. and CSN&Y, but they eventually all came to terms with the fact that there was one powerhouse in the group.

Anywhoo.....thrilled to see Perry coming on strong as the season progresses. Keep it up old man!

They all marveled at how prolific a song writer Young was when they worked with him. I think his voice and guitar are as good as ever. His song-writing has faded.

Everybody's song writing fades it seems. Most groups have one good record and then many more that are not so good. Keeping it real is easy when you are living it but not so much when you have made it. The acts that weren't song writers were good until they didn't get the good songs anymore.

Merle Haggard said he only wrote anything worthy was when his life was f'd up.

The Candyskins do a great remake of the song as well..for what that's worth. Rock Chalk Ellis.

You have eight November games followed by seven November contests for Perry. I think the first should be October, right? Or should the second be December?

Stephen Stills in a suit...classic! I grew sideburns like that at KU. My friends started call me gerbil, they said it looked like I had a couple of gerbils slapped on each side of my face...