Eating on the run in South Korea or, “Do you have anything with protein?”

When you’re a member of the media covering large events, spread out over many days, you can never depend on getting 3 square meals a day. The game times, deadlines and the transportation to and from events all work against having a leisurely sit-down dinner.

Sports reporter Bobby Nightengale and I have had this problem since day one in Gwangju. July 3, the day of the opening ceremony, is good example of the ups and down of food access. Bobby and I start each day with a complimentary breakfast at our hotel, which includes a fairly large traditional American breakfast as well as a Korean breakfast featuring a beef rib soup option.

On July 3rd, after breakfast, I walked 20-minutes to the World University Games main media center to pick up my ticket for the nights Opening Ceremony. I also rented a locker to store my computer and inquired about some other transportation issues. After doing all that it was nearing lunch time and since Bobby and I needed to catch a shuttle bus at 1pm to make a Team USA basketball practice, I went in search of something to eat in the media lounge where they had drinks and a variety of snacks.

It appears Koreans love their sweet snacks as much as Americans. They were plentiful, but the snacks were all heavy on sugar content. I did spot one item described as a “soft mositured cake’ and I recall the label may have mentioned cheese, so I grabbed one hoping it might provide me some protein. I unwrapped and began eating the cake but it tasted like paper. It was paper actually. The sweet cake was so perfectly wrapped in tissue that it had formed an invisible bond around the cake. Removing the paper improved the taste but it was still basically a sponge cake full of sugar. 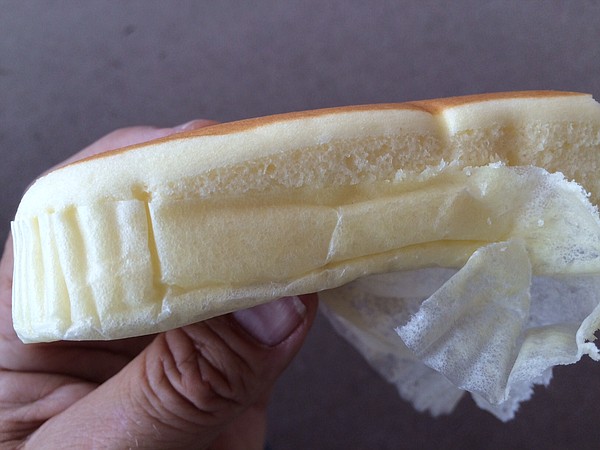 Next I picked up a slim wrapped package that looked like cheese and I pulled back the wrapper to reveal a firm yellow food. I inquired of a volunteer, “This is cheese right?” “No, it’s sausage.” “Really?” “Yes, but not real sausage. Try it.”

I’m pretty picky about sausage, even when it’s real. Maybe that begs the question, “What is real sausage?” I decided to pass on the “not real” sausage. 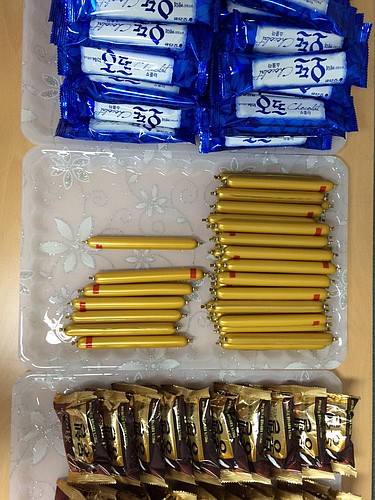 I was told this this wrapped package was sausage, not cheese. "But not real sausage." by Mike Yoder

They also had a wonderful selection of hot and cold drinks, teas and coffee etc. Thinking I may have to rely on a nutritious drink to tide me over I grabbed a fancy looking bootle of tea. Everything on the label was in Korean except for three words “Barley Bud Tea”. I don’t know what nutrients the drink contained but it had a rather pleasant taste of….barley. I can’t really describe it. But I did like it’s unsweetened and natural flavor. If Kansas was a drink it might be barley bud tea. Kind of rural, earthy, pleasant and it grows on you. 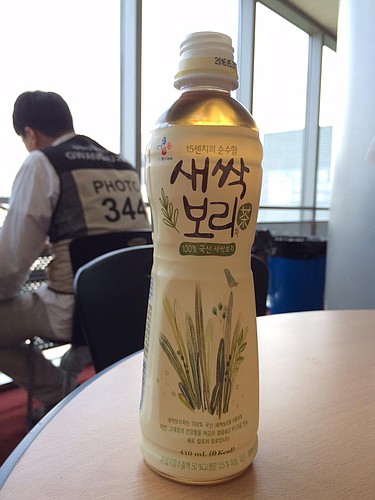 I grabbed another drink to take with me. It was a refreshing mix of vinegar and cider. It was sort of like hard cider but it really had a stronger vinegar flavor. Unusual, but again, tasty and refreshing. 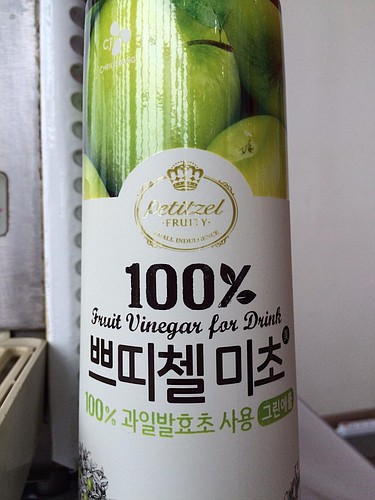 Soon a woman came over - she must have noticed my early signs of protein crash - and pointed me toward another door. I had hit the food jackpot. In the adjacent room was the equivalent of a bomb shelter food pantry. Racks and stacks of pre-packaged noodles, rices and soups alongside two large stainless steel canisters of hot water. Pictures on the packages helped tell me what was inside but volunteers helped translate the contents. I went with a box of rice with concentrated, powdered fish broth. I microwaved the rice for 2-minutes, dumped the fish and spices into the bowl, added hot water and had a really nice meal. 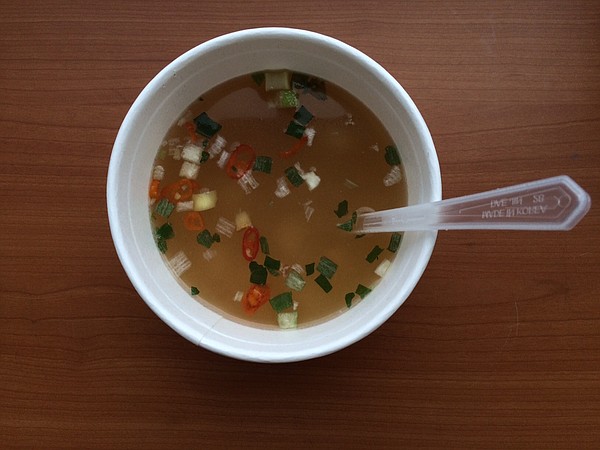 Between 1-2:30 p.m. Bobby and I covered an outdoor Team USA team practice and then I left to catch a taxi to make a 3 p.m. photographer’s meeting at Gwangju’s Main Stadium, the site of the World University Games Opening Ceremony. At the meeting we were given instructions on the evenings event and provided our photography positions for the night. After being escorted to our 2nd-level seats, I realized I still had 3 1/2 hours before showtime. 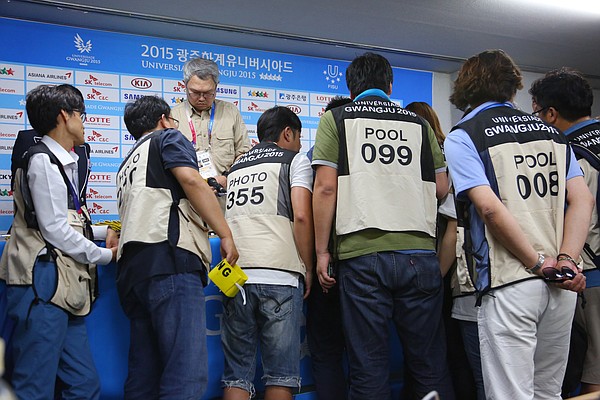 Photographers gather to get their photo vests and find out their shooting position in the stadium for the opening ceremony. by Mike Yoder

The press media lounge at the stadium also had snacks, but most were of the sweet variety. I did score a plastic bag that contained 2 bananas - a real steal. Elsewhere in the stadium, no concession stands were open except one small food court offering chips, including the popular Pringles brand, more sweet cakes and chocolates, teas and soft drinks. I took out my iPhone, opened my iTranslate app and typed in 'protein' and showed it do the vendor hoping she might understand what I wanted. 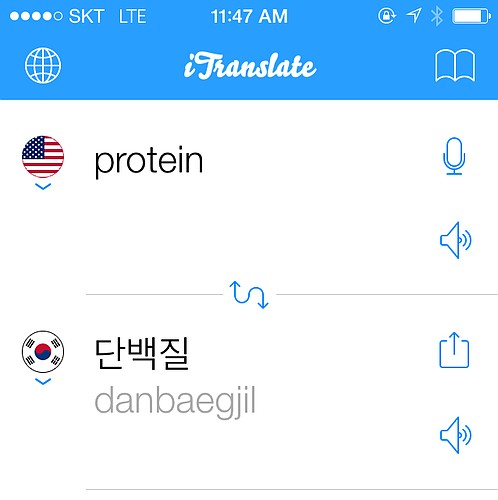 As I held my phone for her to read, I spotted a small container on a high shelf that would be my salvation for the night. It was a can of honey coated almonds that would have to last me until midnight. Actually, they didn't last me until the start of the opening of the ceremonies. I was sitting between a U.S. press photographer from Michigan and two reporters from Venezuela. They were all in the same situation. So the small can of almonds passed back and forth between countries until the were all gone. 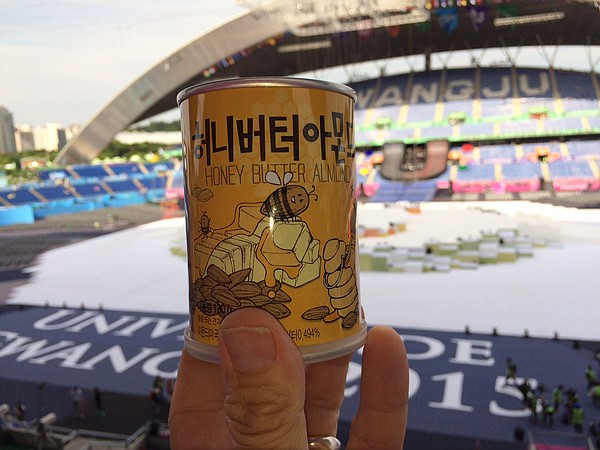 Can of almonds against backdrop of Gwangju Main Stadium, site of the opening ceremonies of the 2015 World University Games. by Mike Yoder

After that it was all fireworks and singing. 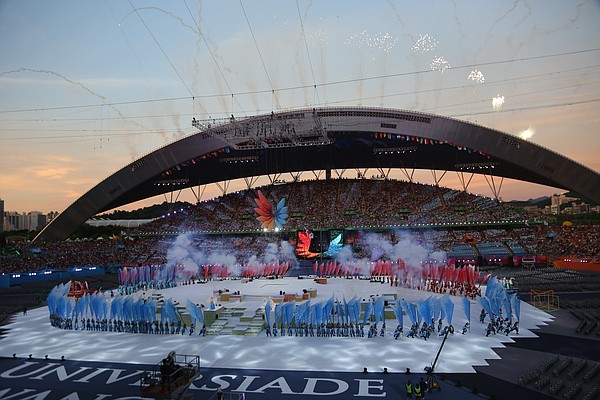 I assure you that there are also good days. Just last night Bobby and I had a break of about an hour between some work and we were directed into a local neighborhood on a side street with several small food shops. We were pointed into one place where we took off our shoes, sat down on the floor of a medium-sized living room space and ordered selection of Korean dishes with rice and a large pot of stew. We're pretty sure the cafe was also the family house. The meal was great and between the hot spices of the soup and the diverse flavors of the many side dishes - banchan, our sinuses were cleared out and our stomachs were filled. 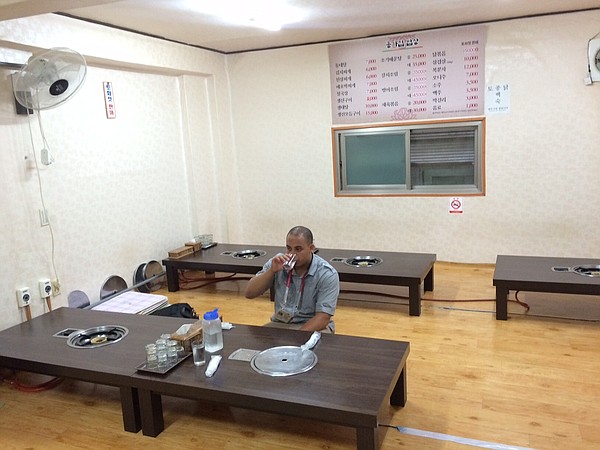 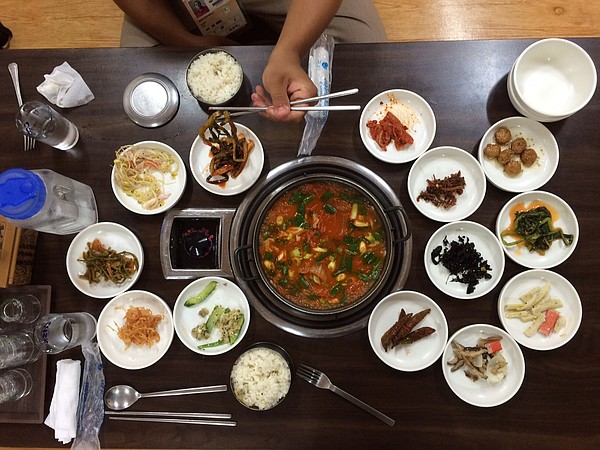