The Day After: USA wins big in scrimmage against China

Team USA and China take a group photograph together after a Team USA 93-56 scrimmage game win over China Thursday, July 2. by Mike Yoder

Team USA shined in its final tune-up before the World University Games opener, out-running and out-hustling China for a 93-56 victory in a scrimmage on Thursday at Seolwol Girls' High.

I'm stealing a page out of fellow KUsports.com writer Matt Tait's playbook with "The Day After" blog. Just a quick way to digest some positives and negatives from each game in Korea.

China had a size advantage over the Jayhawks but it wasn't a factor because of KU's speed. By the time the second half rolled around, China would turn the ball over at mid-court or behind its three-point line, leading to easy buckets for the Jayhawks.

KU had eight players finish with at least nine points. Freshman Lagerald Vick led with 13 points (6-of-13). He played in the final minutes of the fourth quarter with the score getting out of hand and made his last four shots.

Hunter Mickelson (12), Jamari Traylor (12), Perry Ellis (11), Wayne Selden (11), Landen Lucas (10) and Nic Moore (9) were the other players with at least nine points. Frank Mason was the only starter who didn't pile on the points (Tyler Self had 2 points and Evan Manning didn't score). Mason had five assists, but just two points on 1-of-6 shooting. KU coach Bill Self said Mason told him beforehand "he still doesn’t have his legs under him yet." Most of the team is still dealing a little bit with jet lag, but everyone says they'll be ready to go by Saturday.

The Jayhawks open their tournament against Turkey at noon Saturday (10 p.m. Friday CDT). Not much is known about Turkey, but Lucas did mention that he heard it was a physical team.

The Jayhawks are still working to get their bodies back to normal after the big time change, but they used their speed to get easy baskets in transition against China. The first quarter was back and forth with the Jayhawks missing some shots in half court sets and some shots around the rim, but it was all KU afterward. The big thing was everyone contributed and each player had some positive moments. Will this momentum carry over to Turkey in the tournament opener? That remains to be seen.

1 – The Jayhawks want to get out and run in the open floor, and they took full advantage of that on Thursday. No official stats were kept but the Jayhawks scored a ton of fast-break points. Mason, Selden and Moore are strong at leading the break and setting up their teammates for easy scores.

2 – Despite no referees and a little extra contact inside the paint, KU's forwards didn't have many problems finishing at the rim. All of the forwards (Lucas, Ellis, Mickelson and Traylor) ran the floor well on Thursday and converted a number of dunks. But they also had some strong post-ups in the paint and adjusted to the contact after the first quarter to finish inside. On defense, they played well in the second half after China's forwards began to tire and didn't have the legs to score in the paint. 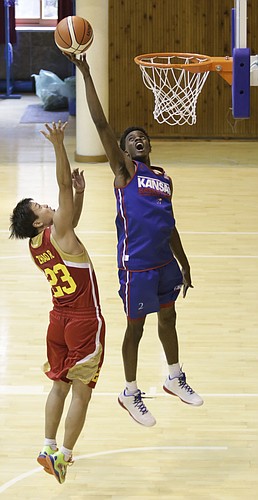 3 – The Jayhawks shared the ball well, leading to eight players finishing with nine or more points KU did a good job of finding the hot hand when necessary and found the extra man in transition. I had the Jayhawks down for 20 assists on their 43 made baskets, with at least two from Mason, Selden, Moore, Ellis, Vick and Traylor.

1 – The on-ball defense by KU guards still isn't where it needs to be. There's still a few moments where opposing guards are able to drive into the middle of the defense and make plays. With Mason and Selden playing 32+ minutes in the final exhibition game against Canada, and 28 minutes from Moore, the Jayhawks are going to need to rely on Vick and DeBose for some quality minutes.

"Against really good guards, you can’t go out and attack the ball like that, they’ll go right around you," Self said. "They did fine. At times, we can be pretty good defensively. But we don’t really have a low-post presence in there to block shots or alter so we need to do a better job of keeping the ball in front of them on the perimeter so we don’t break down as much."

"Julian is going to be fine," Self added. "He’s a good athlete, but he needs to be a good defensive player for us and a good rebounder. Just give us good minutes. We’re not very deep at guard at all so we need him and Legerald to give us some good minutes. We can’t play those three guys 35 minutes every game. So they need to step up and play better." 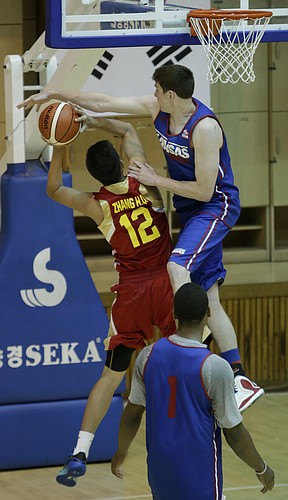 2 – Not sure if the ball feels different, but the Jayhawks haven't shot well from behind the three-point line in their exhibition games. Against Canada in two games last week at Sprint Center, KU shot a combined 10-for-38 (26 percent). It was a little better against China, 7-for-20 (35 percent), but the three-ball hasn't been a reliable weapon. That's also a product of not having Brannen Greene or Sviatoslav Mykhailiuk on the court. 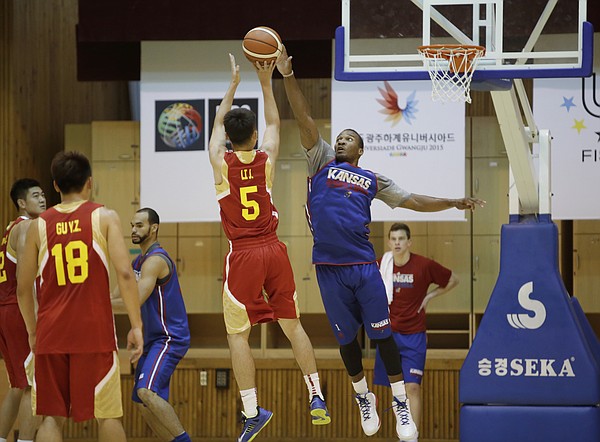 3 – China didn't give KU the best look before the games begin. Self said the Jayhawks are still working on getting their conditioning up, but they ran past China throughout the scrimmage. There were a few plays where China didn't really rush back on defense. At the 2013 World University Games, China went 1-4 in pool-play and finished in 22nd place.

The Jayhawks will open pool-play against Turkey at noon on Saturday at DongKang College Gymnasium (10 p.m. Friday CDT). It's a nice place, built in 1998, holding 2,924 seats. It will be broadcasted on ESPNU with Danny Lee (play-by-play) and Kevin Lehman (color analyst). We will have a live blog, just like any regular season game, right here on KUsports.com.

It was quite the scene on Tuesday night when Kansas University men's basketball players took the court for their first practice in Korea and were surrounded by hundreds of students from Gwangju High School.

The Jayhawks practiced on the local court and the students watched from the stands, cheering on nearly every made basket, going wild on dunks, and even applauding Frank Mason III's ball handling.

Before the Jayhawks took the court for the beginning of practice, coach Bill Self shot around and after missing his first few shots, he went on a little run of made baskets, much to the delight of the hometown crowd.

Most students left about 20 minutes into the practice, which started at 7 p.m. local time, but the ones that stayed were rewarded with selfies with any of the Team USA player they could stop.

Students weren't the only ones who wanted to catch a glimpse of the Jayhawks. The shuttle driver for photographer Mike Yoder and myself asked me who the best players were so he could take pictures with his camera. A local Korean TV station also showed up, interviewing some of the students and capturing video of the practice.

Near the end of practice, security guards went into the upper deck to watch Team USA, giving hearty applauses when Wayne Selden Jr. and Mason drove past defenders for reverse layups.

The next practice is at 10 a.m. tomorrow, but alas, students will be in school and likely unable to attend.

I flew to Europe 30 years ago, so I had forgotten what you have to endure on a long-distance flight. Kansas City to San Francisco is a cinch, but the 12 hours to Seoul is a struggle to remain sane. For starters, the headphone jack at my seat didn't work so I was forced to watch 5 movies with no audio content. That wasn't so bad for Avengers: Age of Ultron, since its mostly crash, bam and boom, but missing out on the dialog to the SpongeBob movie: Sponge Out of Water really hurt.

When a film wasn't showing on our cabin monitor, a small image of our plane was tracked by GPS as it slowly moved across the route. For most of our flight over the Pacific the plane looked stalled. Even without audio I could tell that movie was going nowhere.

As for the plane itself it's big and long with rows of 10 people across. It's cramped in economy. My ticket says it's an hour shorter flight on my return. That must mean I'm sitting in the front of the plane where I'll arrive sooner than the tail section. 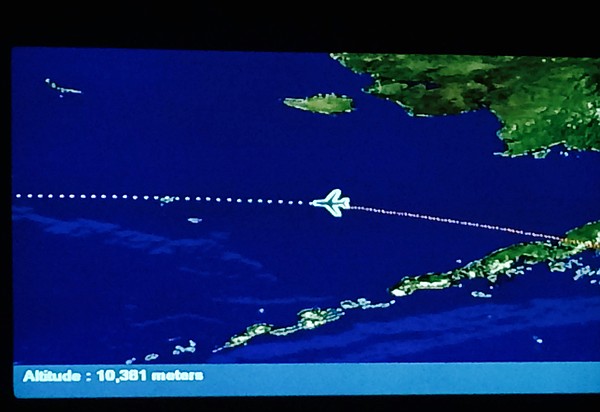 You had to feel sorry for the U.S. Women's basketball team who were on our flight as well. They were also in economy but even further back then I was.

We eventually landed, negotiated Seoul's huge and modern airport and found a University Games shuttle for another 4 hour drive to Gwangju. It was around 28 hours of total travel time from Lawrence.

Our hotel - Firenze Tourist Hotel is very nice with many modern conveniences, including a toilet that has more options than Starbucks has coffee shops. The heated seat is nice though. 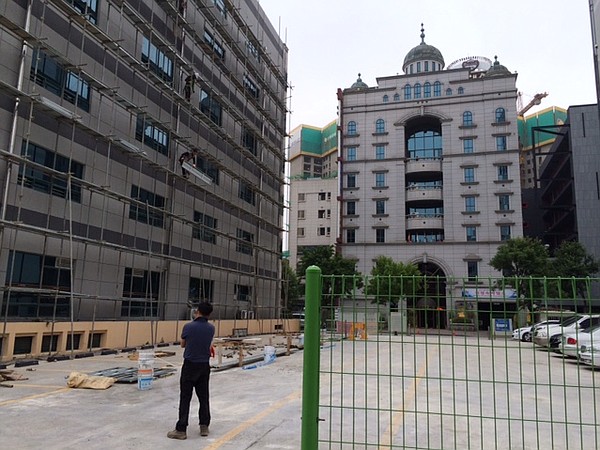 I think things will smooth out. I just wish I could tell which one of these menu items is the vegetarian combo? 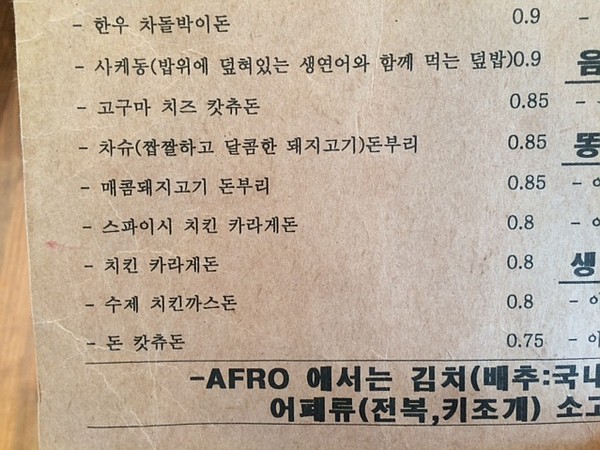 Today reporter Bobby Nightengale and I took a taxi to check out the gym where KU will be playing their first of four games July 4 against Turkey. Small, intimate place. No air-conditioning was on in the gym for our visit. Lets hope for some a/c on the 4th.

Welcome to the "Kansas in Korea" introductory blog post. Journal-World photographer Mike Yoder and I arrived in Gwangju at 10 p.m. local time on Sunday following about 29 hours of travel, starting from when I picked him up in Lawrence and we drove the Kansas City airport.

The Jayhawks are scheduled to make it into Gwangju around 2 a.m. on Tuesday (noon Central time on Monday). They'll be staying in the Athlete's Village, which is a set of high rise buildings about 20 minutes from Mike and my hotel in the heart of Gwangju. Below is a photo I found, via the official Gwangju Universiade website. 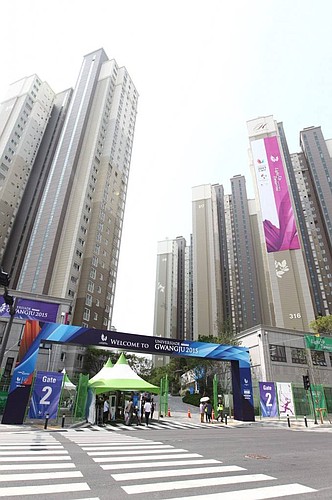 The Athletes Village in Gwangju for the World University Games. by Bobby Nightengale

After making our connection flight in San Francisco, we took the same plane to Seoul as the Team USA women's basketball team and the head of the USA's delegation, Gary Cunningham, who coached for two seasons at UCLA following 10 years as an assistant under John Wooden.

Cunningham said the biggest transition for KU will be the physicality allowed by referees in the low post. He added that the Serbian team, who KU will play at 10 p.m. Central on July 7, has a lot of size and is usually one of the best teams, while the Russian team, which is in a different pool, is known for its finesse, but it has tons of skill. One of the tiebreakers includes point differential, which Cunningham said cost some USA teams in the past because they didn't run up the score as much as they could have.

We ran into Switzerland's athletes at the Incheon Airport in Seoul, including their men's basketball players. Yoder shot a photo of them, which can be seen below.

It's easy to tell the World University Games are a big event in Gwangju. There are signs everywhere, buses go around the clock to shuttle media and athletes to where they need to go and the main facilities are state of the art (we haven't seen the basketball arenas yet).

It should be a great experience for the Jayhawks. They'll get to play some tough competition and they'll get a chance to bond outside of their comfort zones in a different country.