I don’t recall getting this memo so I’ll have to make do with faded jeans and a light blue shirt. This will be the first time I’ve been scrutinized by the fashion police. Sports reporter Bobby Nightengale and I did get denied entrance at one security gate, but that was not because I was wearing black rather than soft baby blue. We were just at the wrong entrance. 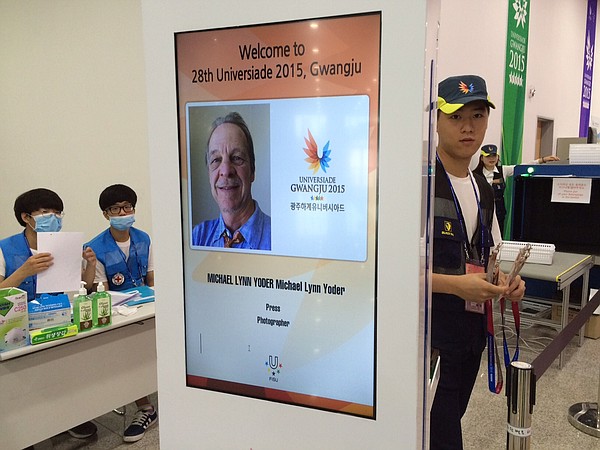 If you watch the games on TV, I may be the rogue photographer in inappropriate clothes. Hopefully the supplied media photo vest will cover up any fashion faux pas. Heck, if I had known about the vest I would have brought a cummerbund and bow tie to complete my fashionable photographer’s outfit.

The newest piece of gear in the list above is the EyeFi Mobi Pro SD card. It works like a regular 32GB memory card in your camera. What makes this card special is that it enables you to make a WiFi connection between your camera and a nearby iPhone, laptop or other mobile device. After setting up the password and WiFi connection between the two devices, each photo taken will automatically upload and appear on your mobile device. This has been extremely helpful in my coverage here. I can be shooting a KU practice or activity with my better professional equipment and download the images almost instantly to my iPhone or iPad. From there it’s a quick Tweet or an email away from transmitting the higher quality file to social media sites or the newsroom to immediately post to the web. On arrival in the Seoul airport, I spotted about 8 young female paparazzi running ahead of a famous Korean music star. As the star had left the building, all the photographers sat in the waiting area next to me quickly transmitting their photos from their cameras to their phones and then Tweeting out their star shots. They looked like real pros who had been using EyeFi cards for years.

Getting around Gwangju to cover the events is fairly easy. Shuttle buses transport media to central locations and then we walk or taxi to others. Buses here are pretty stylish and comfy. Taxis on the other hand are a crazy ride. Very aggressive drivers and switching lanes and speeding are a norm. Small mopeds and motorcycles zip in and out of traffic and seem to ignore and signals. Bobby saw one moped rider try to maneuver around a car in the rain and ended up wrecking. 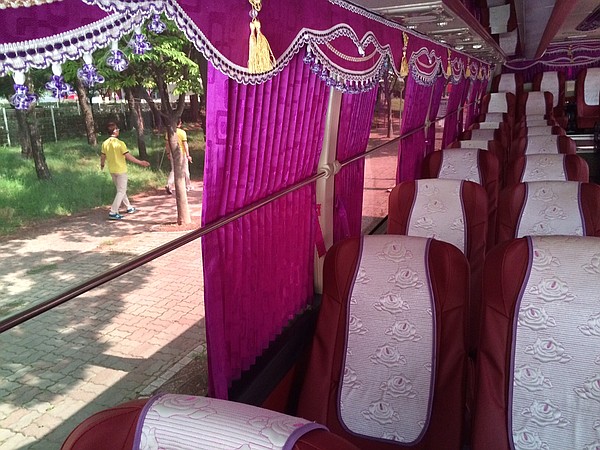 Food has been really good but we don't always know what we're ordering and eating. Many menus are Korean only as are the waiters and chefs. I saw a lady behind counter rolling out what I thought was a sushi roll and we ordered that. What we got were several fried seaweed wraps stuffed with noodles, veggies and some other ingredients. It came with a hot and spicy bowl of onion and spice sauce and a plate full of beautiful, fresh greens to wrap around the fried rolls. Bobby and I filled up on 2 orders and it cost about $7 U.S. 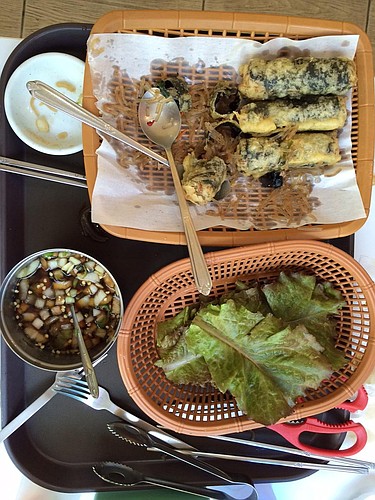 Dish from a Korean BBQ cafe. by Mike Yoder

We've been amazed at the security presence around the facilities. Even the Gwangju police can be rather intimidating. Bobby thought these guys might fire a warning shot over my head as I asked them for a photo. Nearby was a military-style SWAT tank. They are prepared! 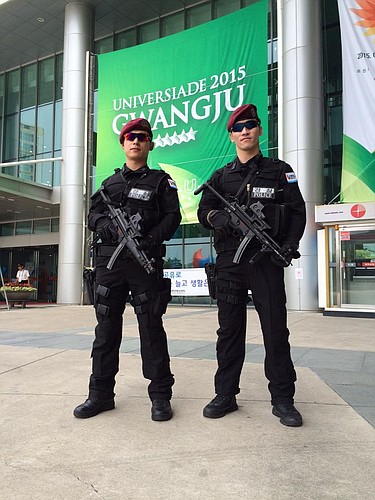