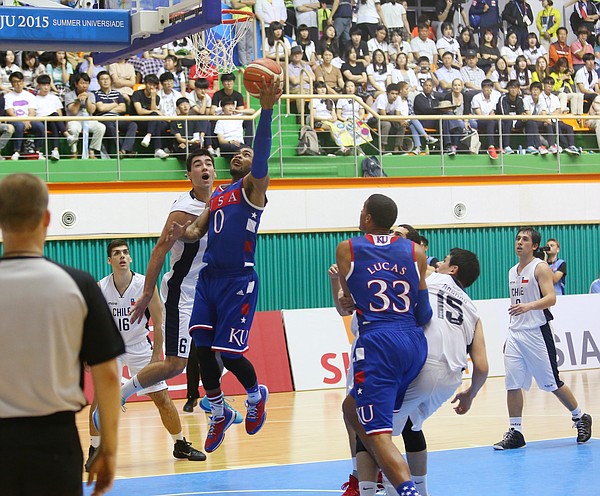 Kansas guard Frank Mason III (0) drives to the basket in a Team USA game against Chile Tuesday, July 7, at the World University Games at Muan Indoor Court in South Korea. by Mike Yoder

From the opening tip, the United States men's basketball team dominated in a 106-41 victory against Chile on Tuesday at Muan Indoor Court. The Jayhawks made their first five shots, and SMU senior guard Nic Moore sparked the squad with four three-pointers in the first half, finishing with 15 points.

The Jayhawks were just the faster and stronger team against Chile. They won the rebounding battle, 52-28, and forced 23 turnovers. KU junior guard Frank Mason III, who had big stretches of points at the end of the second quarter and the beginning of the third, scored a game-high 23 points while junior guard Wayne Selden Jr. added 18 points, seven rebounds and five assists.

It was one of those games where the Jayhawks were in control midway through the second quarter, but they never let up, keeping their focus and intensity.

The Jayhawks did just about everything they wanted, scoring 58 points in the paint with 31 second-chance points. They had to run up the score to gain an edge in the tiebreaker system, in case of a three-way tie in the standings.

Against the weakest team they've faced in the World University Games, the Jayhawks looked sharp and focused in the rout. They shot the ball well, rebounded well, executed a run-and-jump defense in the second half to speed the game up a bit. It was one of those fights that should have been called in the first or second round, but they were forced to go all 12.

1 – For the first time since the Jayhawks arrived in Korea, they shot the ball really well. USA shot 53 percent in the win (42-of-79), including 39 percent from deep (12-of-31). The big key was Mason and Moore drilling shots. They haven't shot the ball well (Moore was in deep foul trouble against Brazil and Mason has a sore wrist), but they combined for 38 points on 13-of-22 shooting. Selden was 6-of-7 from the floor, including 3-of-3 from three.

Chile went to a 2-3 zone early in the game and the Jayhawks just shot their way around it with solid ball movement from side-to-side.

"Yeah, just moving it, getting the ball from side to side," Moore said. "Everyone contributing. It’s fun to blow out a team like that. It shows that we can do it but we still have got work to do." 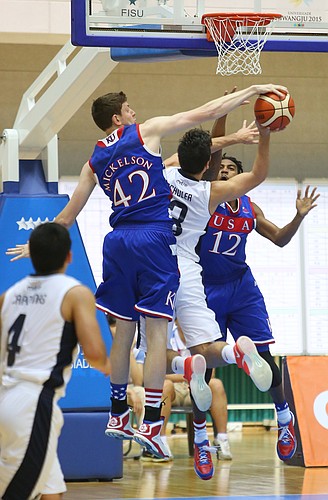 2 – Moore and Lucas had strong bounce back games. Lucas only played three minutes against Brazil and Moore was in foul trouble throughout, going scoreless with five turnovers in 10 minutes. Both of them returned to the court with some fire. Lucas cleaned up the glass with seven offensive and seven defensive rebounds. Moore shot lights out, grabbed two steals and had just one turnover in 25 minutes.

But for Moore, there was no extra motivation to play better.

"Man, I just wanted a ‘W,’" Moore said. "It doesn’t matter. If I would have fouled out and had zero points again, I’m still happy at the end of the day." 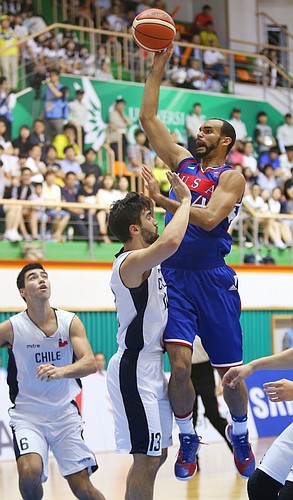 Kansas forward Perry Ellis (34) drives to the basket in a Team USA game against Chile Tuesday, July 7, at the World University Games in South Korea. by Mike Yoder

3 – Helped by the score getting out of hand, minutes were distributed more evenly, giving some of the starters a rest. Selden played the most at 27 minutes but that's a big step down from when he only sat eight seconds in the victory over Brazil. Mason and Moore played a little more than 25 minutes, Ellis played 21 and everyone else was under 20, helping keep their legs fresh after an off day and two games in two days coming up.

Mason added: "That helped out a lot. That gave other guys a chance to get in, get some experience on the court and run up and down, and make a couple of plays. I’m happy for them."

1 – Of course, we're going to have to nitpick from a 65-point win, but the Jayhawks probably need a bigger contribution from KU senior forward Jamari Traylor. Not that it was going to affect the outcome, but Traylor was held to two points and two rebounds with four turnovers in 14 minutes. He's had some great practices and provided a nice boost off of the bench in Sunday's win over Brazil, but just couldn't find his rhythm against Chile. 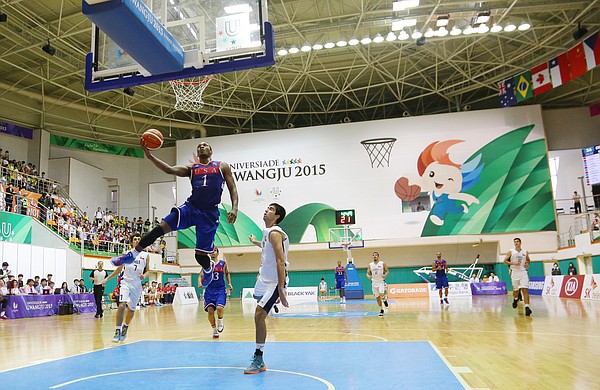 Kansas guard Wayne Selden Jr. (1) drives to the basket in a 106-41 Team USA win against Chile Tuesday, July 7, at the World University Games in South Korea. by Mike Yoder

2 – The Jayhawks scored 58 points in the paint but only made 15 trips to the free throw line (I told you we were going to have to nitpick!). One of the main reasons the Jayhawks didn't get to the line more is because the forwards didn't get many catches in the post. It was mostly guards driving and kicking, or just simply driving to the rim. USA's forwards had some nice hi-low ball movement, but they didn't really get a chance to get too involved.

"We didn’t really throw it inside," Kansas coach Bill Self said. "That’s the thing. We struggled with it last year. We’re struggling with it right now. A lot of it’s our guards. Our guards being able to throw the ball to big guys and our big guys deliver. I think we’ll get better at it but that’s something that we’ve still got to do a better job.

"Like Perry scored nine points today. He didn’t play as many minutes because he’s got a sore foot but he scored nine points and I think if we threw him the ball more he could’ve had 15 so easily. So we’ve got to do a better job with that." 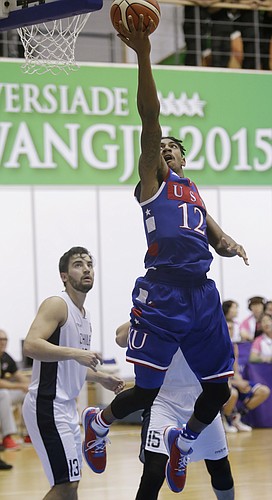 Team USA guard Julian DeBose (12) drives for a score in a 106-41 Team USA win against Chile Tuesday, July 7, at the World University Games in South Korea. by Mike Yoder

3 – Chile was the weakest team the Jayhawks have played in the tournament, but now they have to turn around in less than 24 hours and face undefeated Serbia. Maybe it's a good thing to get extra rest and get every player involved before a big game. But it's going to be a drastically different game with Serbia's physicality and veteran savvy. How will the Jayhawks adjust?

"We’ve heard that they are a good test so we’ve got a real one tomorrow," Moore said. "Always excited to get out there and play against good teams. We’ll see how it is tomorrow so hopefully we come ready to play."

In a battle of the last two Pool D unbeaten teams, the Jayhawks will face Serbia at noon today (10 p.m. Tuesday CDT) at DongKang College Gymnasium. KUSports.com's Benton Smith did a great breakdown of the Serbian team and how it matches up against USA statistically.